The Flight of the Silver Vixen
Review from a Deanic perspective 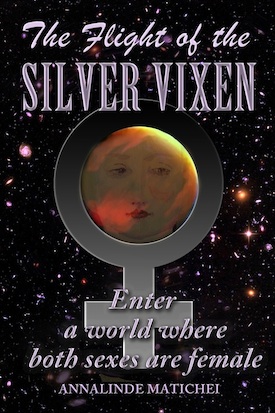 The Flight of the Silver Vixen by Annalinde Matichei may initially appear to be a piece of feminist science fiction.

In a certain sense it is, though it is likely to appeal to a much wider audience while simultaneously disappointing the more doctrinaire feminist reader. It deals with the classic theme of worlds without males – a tradition begun in 1880 by Mary E. Bradley's Mizora.

The Flight of the Silver Vixen is unique, however, in that its central characters are not a race of women separated from men and somehow reproducing without them, but a feminine species with two feminine sexes that has never had any relation to any form of masculine being.

But the uniqueness of the book goes much deeper than that. Beneath the surface of an all-action swashbuckling tale of all-girl derring-do, lies a philosophical and even a devotional depth that soon becomes apparent.

When we reviewed Nausicaa of the Isle of the Wind, we found it to be an unintentionally Filianic film: an allegory of the universal Archetype of the Feminine Savior written by a Marxist atheist (who began to question his atheism as a result of the experience of making the film).

The Flight of the Silver Vixen is almost the reverse of this. It is not a religious allegory, and its central characters are rebellious gang-teenagers (although much more civilized than that makes them sound to an Earthling ear!) who steal a space-craft. However, the background culture is one of faith in Our Mother God and in the deeper philosophy of thamë that underlies a Déanic civilization.

In the most obvious sense, this is revealed in passages like the following:

“What will happen if we enter the planet’s atmosphere?” asked the Princess. “Why do they sound so urgent? Might we crash or something?”

“Crash?” said raiClaralin. “At this speed, friction with the planet’s atmosphere will heat the ship very rapidly. We shall burn to a crisp long before we reach the planet’s surface.”

“Be brave, child,” said the Princess calmly – though ’Lannie was probably two years her senior. “You have been a very brave girl so far. Please go on being brave. If Dea is calling us to Her arms now, then we must go to Her with smiling faces.”

But the story goes far deeper than this. The idea that all authority derives from Dea is fundamental to the thinking of HMAS Silver Vixen's crew – hijackers though they are – and when they find themselves completely cut of from Mother Empire, their first thought is to re-establish legitimate authority among themselves.

Ironically, they soon find themselves in an all-feminine world that is beginning to lose the concept of Divine thamë and the young rebels find themselves thrown into the position of potential saviors.

This underlying philosophy is made clear in a discussion on the game of chess between the Captain of the Silver Vixen and the very young Queen of Astarche (she is Queen because her mother and sisters have been murdered by the bloodthirsty Kang pirates):

“Why is it then that the Queen can move but one square in any direction, while her Princess or Vizier can move the whole length of the board in any way she pleases?”

The Captain suppressed a look of surprise. “Because, Your Majesty, the Queen is the yerthing of the Spirit Herself. Every possibility is latent in her; but hers is the Unacting Action. Is it not written: ‘Earth moves but Heaven is still; the rim revolves but the Center remains without motion’? The Queen is that unmoving Center containing all potentialities; while those potentialities are enacted outwardly by her servants, each in the manner of her own capacity.”

The Queen moved her hands as if to clap them, but restrained the childlike gesture. “That makes it perfectly clear, honored Captain. I wonder why no one has explained this to me before.”

“I wonder too,” said the Captain. It did indeed seem very strange. At home it would be questioned whether a people who lacked a basic grounding in the Metaphysics of Polity could be fit to govern a village, far less a Ranyam. Princess Melenhe, like every royal person, even those far from the throne, had been brought up from her earliest years on the Science of State. RaiAntala had no such background, but like every educated person, she understood the symbolic principles on which all life is founded.

She had heard of peoples who had lost these principles, who even had no true Royal Line. She knew also of peoples who termed the aethyr “space”—as if all that great distance she had travelled to this world were not pervaded by the fifth and immaterial element, but were a void of simple nothingness – a “space”. RaiAntala felt a sudden vertiginous lurch in the pit of her stomach as she stood for a second, in imagination, upon the precipitous void of this empty universe. She knew that the two voids were one: that which was enacted in the State and that which was imagined in the aethyr. Could it be that the people of Astarche were so far strayed that they were less of a State than the tiny polity of the Silver Vixen?

We can see by now that we are a very long way from the usual territory of feminist science fiction, which tends to be firmly on the side of that very void that so appalls the Captain – the secular-materialist view of life, the universe and politics.

But the philosophy of the book goes deeper still. At first the primary antagonists appear to be the murderous Kang pirates, but as the book progresses we begin to understand that a far darker force lies behind their attacks, and also that, while demonic forces are real and palpable, they are not only (although they also are) external to us. The war between light and darkness takes place both outwardly and in the human soul:

The Priestess laughed gently. “My child, spiritual truths are not like the facts studied in elementary schools. They are not simple things to be learned from a book or a table of figures. They are not like physical things. We cannot say ‘there is – or is not – a dark spirit here’ in the same sense that we say ‘there is – or is not – an apple in this basket’.”

“You make it sound very abstruse, honored Matri, and yet there was a dark spirit in this sleeping child. We saw the evidence of that clearly enough.”

“Indeed we did, Commander. Indeed we did. That is why I say that the simple truth is that these dark spirits are always with us, hovering and waiting to step in. Our forebears knew that. Why else did they paint labyrinth symbols on their doors that the spirits might become lost before they entered the house? So much of what they did was done because life was a constant battle with those dark ones.”

“And are they or are they not entities who seek to gain entrance to the human soul?” asked the Commander.

“The answer to that question is not a simple yes or no,” replied the Priestess. “For that reason, it can seem unsatisfying in a technical age. But if we are to be strictly accurate we have to ask questions like ‘what is an entity?’ For physical beings like ourselves, it seems very simple. A human entity has a body and appears to be confined within the limits of that body. But in fact, in the lower psychic strata that lie, as it were, ‘beneath’ our world, things are not always so simple. Entities may rise and fall like waves in a dark sea. At one moment a wave appears to be a distinct entity, at another it seems to be simply a part of the sea. Even our own precious identities as individuals are not really as clear-cut as we like to believe, although our physical bodies—for the present—lend them a certain apparent absoluteness—

“But this is a long and complex subject upon which I am sure you did not come for a lecture. Let it suffice to say that for all practical purposes you may regard demonic forces as entities that all civilizations have been profoundly aware of, which pose a threat to both the individual and to the social order as a whole. When the integrity of either is breached, they may gain access.

The Flight of the Silver Vixen can certainly be called a philosophical novel, and a philosophical novel written from a Déanic standpoint. It also explores other areas of thought – the question of language-translation engines, for example, (often avoided in science fiction stories, by having aliens mysteriously talking English) is treated seriously and some interesting ideas about the nature of language are raised as a result.

But we should be leaving a false impression if we were to make this seem like a primarily philosophical novel. It has philosophy in it, certainly, but it is fundamentally an action adventure story. However, underlying any action is a philosophy. Many science fiction stories ignore this and assume that all beings have essentially the same philosophy as modern western Earthlings.

Miss Geneviève Falconer once said of Star Trek that it was the story of people who traveled unimaginable distances to inconceivably alien worlds and always found an American liberal-capitalist moral.

The underlying moral, or ethos, of The Flight of the Silver Vixen is that of Déanic faith and philosophy.

The Flight of the Silver Vixen is available as a paperback and on Amazon Kindle. You can find it here.