The Myth of
the Myth of Matriarchy 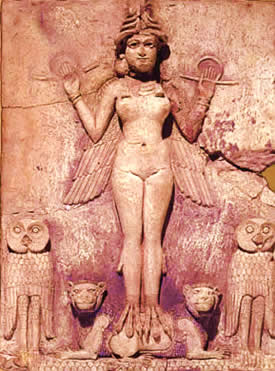 We often hear that modern scholarship has discredited the myth of ancient matriarchy. Has it really? Or is the modern patriarchy rallying to defend its ancient myths?

You can certainly tell when the Great Patriarchal Pachyderm has been stung by a gadfly. Toward the end of the 19th century, when the notion that human civilization began a few thousand years ago was conclusively disproved, it was also discovered that most civilizations before a certain point had an almost exclusively feminine iconography. Scholars began to speak of matriarchy and of matriarchal civilizations.

The 20th century brought much more evidence of this kind. James Melaart, who was in charge of the excavation of Catal Huyuk, the largest neolithic site yet discovered, wrote:

"Between 9000 and 7000 b.c. art makes its appearance in the Near East in the form of statuettes of the supreme deity, the Great Goddess."

"the cult of the Great Goddess" is "the basis of our civilization".

Beginning with J.J.Bachofen's study Myth, Religion and Mother-Right (1861) scholars began to talk of matriarchy, and of matriarchal societies, ruled by women. This continued into the late 20th century with the work of many female scholars such as Marija Gimbutas, Merlin Stone, Carolyn Merchant and Gerda Lerner. What, precisely, is meant by matriarchy (and indeed whether authors use the word) has varied, but the idea of feminine-centred civilizations – a fact attested by the unanimous testimony of the iconography found in neolithic sites worldwide – has been a common theme.

For a fuller summary of evidence for feminine-centred civilizations, see The Feminine Heritage.

Yet, if you read "official" or popular scientific articles on the subject today, you will almost certainly encounter such statements that "the theory of ancient matriarchy has long been discredited". You could be forgiven for believing that all the evidence for feminine-centred, Dea-worshipping and possibly female-ruled societies had been conclusively disproved by a host of new discoveries. Or at least one new discovery.

Nothing of the sort has happened. There has simply been a great deal of verbal gymnastics and conceptual reshuffling in which the uncomfortable idea of ancient matriarchy and matriarchal society has been shunted aside with a number of inconclusive – and often frankly far-fetched arguments.

We reproduce, with permission, a commentary on this process which explains exactly what has been taking place:

One frequently hears comments to the effect that "the once-popular theory of ancient matriarchy has now been discredited by scholars". The truth behind this statement is simply this. Scholars have declared, rightly, that there is no evidence that earlier civilizations were actually ruled by women. This is perfectly true, for there are no written records extant for these periods (which constitute a length of history many times greater than the whole era of patriarchy) and it is impossible to be certain what their social institutions were. What is quite clear is that in their iconography they were almost exclusively feminine-oriented.

The modern scholar takes it as axiomatic that female rule is inherently unlikely (this from people who otherwise argue that the differences between men and women are purely "socially conditioned", and therefore ought logically to believe that a different set of "conditioning" would produce a different social order) and that the burden of proof rests with those who claim that female rule ever existed. "If it cannot be proved, we may assume it did not exist as it is, after all, most improbable" is the unspoken "scholarly" assumption behind this, which is quickly expanded to "the theory of matriarchy has been discredited by scholars" in less rigorous contexts.

Knowing what we do of the way traditional peoples always organise their social activities and institutions in imitation of (in the words of the great anthropologist Mircea Eliade) "Those things first done by the gods", we should say that the very distinction between iconography, religion and social organisation is a purely modern one that only a rajasic-era mind could conceive of. Feminine-dominated iconography, for any traditional people, must imply a feminine-dominated society [see criticism and response on this point]. In our view the burden of proof rests heavily upon the anti-matriarchy school. The existence of matriarchy is by far the most probable and reasonable hypothesis until and unless someone comes up with a shred of evidence against it.

Be that as it may, the existence of female-ruled civilizations is in no way necessary to [our argument]. That society before "patriarchy" was feminine-oriented culturally and spiritually is beyond question. In the first part of the 20th Century, Ananda Coomaraswamy wrote:

[Our present civilization stems from] a common cultural inheritance throughout an area extending from Mesopotamia to Egypt and the Ganges to the Mediterranean, [founded upon] the worship of the Great Mother.

Many thousands of discoveries made since that time have all served to confirm and amplify Dr. Coomaraswamy's statement.

From The Feminine Universe

We feel this clarifies the matter. Since we refer often in this site to the patriarchy and to pre-patriarchal societies, we feel it is important to make clear what we are referring to and to dispose of the Myth of the Myth of Matriarchy. 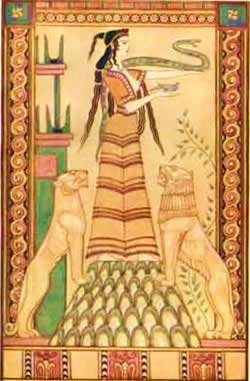 Our main meaning is that before the patriarchal era, human societies were centred on the worship of Feminine Divinity and were, culturally speaking, feminine centred.

There is no serious argument against this, although there is no shortage of silly arguments. For example in 2004, the Japanese archaeologist Tatsuo Kobayashi, commenting on the vast preponderance of female figurines found in Japanese neolithic sites, argues that they may not in fact be female, despite their large hips and well-developed breasts because, after all, "some men have breasts too". One wonders why later bearded figures are not regarded as female on the grounds that some women have beards.

What these figurines actually prove (if further proof were needed) is that the phenomenon of the dominance of feminine imagery in the neolithic period is worldwide. It is found in Japan just as much as in Old Europe, the Near East or the Indus Valley.

Other "historians" have tried to argue that this vast preponderance of female images "might have been ancient pornography". An entire civilization with all its sacred and secular art entirely devoted to pornography? Come, Daddy. You do want to be taken seriously... don't you?

Finally, we need to make a note on the term "neolithic" or "new stone age", which can leave the reader with a picture of "primitive" people in loincloths based on the popularized "Darwinian" view of history. This is far from the truth.

Matrifocal pre-Minoan Crete, for example was a society with great multi-storeyed palaces, villas, farmsteads and harbours, with advanced transportation. This was a society where the feminine image was vastly preponderant. Archaeologists are also struck by the marked absence of signs of warfare, in sharp contradistinction to all comparable societies in which the male image predominated. Also striking is the fact that when, at a later period, male images begin to dominate, fortifications and weapons of death and warfare appear at the same time.

These things are what we are referring to when we speak of pre-patriarchal society. The overwhelming likelihood would seem to be that such societies were ruled by Queens and led by Priestesses, simply because divine and human authority are closely linked in traditional societies.

The concept of matriarchy, in this sense, is opposed not only by the patriarchy – which hates the idea of feminine rule and finds it both threatening and inherently unlikely – but also by many feminists who wish to see ancient matriarchal societies as being constructed in accordance with the egalitarian and liberal principles of the late-patriarchal Left.

Fortunately this is not an argument in which we have to take part. Matriarchy is a useful term, and we suspect that it can be taken literally in many cases. But for our purposes, as a Chapel of our Mother God, we only need to refer to the fact that pre-patriarchal societies were civilizations centred on the love of Dea and on the feminine principle.

And on this, not a shadow of serious doubt has been cast.

The Feminine Heritage: Learn the truth about "Matriarchy"

Britomartis: A classic case of the Supreme Mother Goddess rewritten by the patriarchy