Durga
The Vikhelic Return of Our Mother God 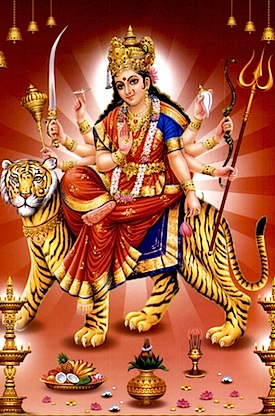 Durga is the warlike face of Our Mother God and as such has a special relationship to this last Kali Yuga.

According to the earliest European myths, when Our Mother God created the world (meaning, of course, the manifest cosmos, not just a particular planet), the next thing she did was to create the seven great Angels, or Powers, to rule the seven major Streams or Tendencies of Creation.

Naturally, the seven "planets" are only the local symbols of these Universal Powers providentially set about our particular earth.

As we have explained in our page on the Kali Yuga, this last and shortest Age is strongly influenced by Sai Vikhë, the Martial or warlike influence. Kali Yuga is known as the Age of quarrel and dissension. It is also known in Classical terminology as the Age of Iron: Iron being the metal of Mars.

In our world, the male sex is especially associated with the Vikhelic principle. The sign of Mars is also the sign for masculinity. Thus it was natural that, during the Kali Yuga, the male sex should come to be dominant and the system called patriarchy should arise all over the world.

In India – as everywhere else in the world – the earliest Images of God are all feminine. They are found throughout the early remains of the Indus Valley civilization. As Kali Yuga advanced – as everywhere else in the world – these Feminine Images were gradually depicted with subordinate masculine counterparts or consorts; and eventually the masculine consorts became the dominant "gods".

In India, as in many other places, Our Mother God returned to the hearts of Her people whenever an opening in the patriarchy permitted it. We see this pattern everywhere – Isis in Egypt, the religion of the Magna Mater (Great Mother) that vied with Christianity to become the new religion of the late Classical world, Kuan Yin in the East, Tara in Tibet, the Lady Mary in mediaeval Christianity.

One important difference was that in India, alone of the currently surviving Images of Dea, there are actually thealogical schools that assert quite unequivocally that Dea (Devi) is the One Supreme Creatrix, both "the Supreme Brahman and the all-pervading Atman" (Padma Purana), the Absolute Deity. Not all Hindus by any means believe this, but it is a fully accepted and intellectually thorough position within Hinduism.

Of course this still takes place within a patriarchal framework, but it is the nearest thing we have within a modern "world religion" to the original religion of humanity.

It is interesting to see just how this return to the recognition of Our Mother God as "the One without a Second" (Devi Mahatmya) came about in the Iron Age.

Works such as the Devi Gita present Dea as the Pure Absolute, the Mother of all. They dwell on Her Divinity and on methods of devotion to Her.

However, the earliest significant work in patriarchal India to proclaim Her absolute Divinity was the Devi Mahatmya which concentrates on Her Form as Durga, the Great Warrior-Goddess. The Devi Mahatmya, throughout its thirteen chapters, dwells at length upon the battles of Durga against demonic forces. The gods are helpless against the Great Demon Mahishasura and only the Feminine Trinity, transformed into the form of Durga can defeat him and his hordes and restore order to the world.

The story is long, and full of descriptions of violent battle and magical feats of arms: and it is from this beginning that the worship of Dea as all-in-all – the Self of all, the superior of all the demigods elsewhere worshipped as gods – first re-emerges into the Indian world.

To put it in Déanic terms, Dea returns in the form of Sai Vikhë, the Angel of Battle, because this is the way that She can conquer a Vikhelic age.

Sai Vikhë is a Janya, and this Déanic term can be "translated" either as "Angel" or "Goddess", since it can be seen as signifying either a servant/messenger of Dea or an Aspect of Dea Herself (this can be understood once we realise that when we are in the realm of Transcendent Personality, we have left far behind the treasured "individuality" of the separated human soul (or jiva).

The Indian view of Durga is precisely in keeping with this outlook. She is at once a separate "goddess" and a Form of the One Supreme Devi. She is an emanation of the Feminine Trinity. She may at times appear as a whole Divine Army and at times as a single Being. 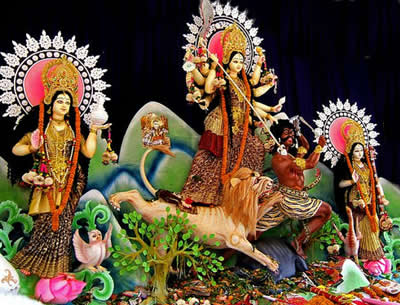 We shall be seeing some videos in which Durga merges and emerges from the Feminine Trinity, deploys herself as Many and as One, in the unending cosmic dance or play (lila) of Dea in her manifestation as Sai Vikhë/Durga.

While Dea is often seen in Her compassionate forms, such as Mary, Kuan Yin, or or the gentler Indian forms of Devi, there seems to have been something in the Aethyr of Kali Yuga that necessitated, in order for Her to return to being recognized as the One Absolute, that she appear first in Her Vikhelic Form.

There is an interesting parallel here with the Herthelan mythos which tells that the present Herthelan era (the current section of its Kali Yuga) began with the manifestation of the Divine Feminine Sun in a Vikhelic form as Sai Rayanna (the first Empress) in order to defeat the demon hordes.

Perhaps it is that the Demons of Darkness, being stronger than ever in this last Age, must be defeated in order that Dea be recognized. Thus, in India, Durga was the only Form of Devi that could have initiated Her return to full recognition.

Durga remains strong in Indian Devi-worship, with Durga Puja in Calcutta (the largest outdoor festival on earth) and among Bengalis throughout the world, celebrating the victory of Durga over the Demon.

The Warlike Aspect, or Angel, of Dea has always been present, for it is one of the Seven great Streams of Powers that fashion the cosmos. But it comes to the fore in Kali Yuga.

In every age, though, the highest Holy War is the battle against our own inner demons and against all that would hold the soul from Dea.

Sai Vikhë, or Durga, is invoked whenever we need protection from the hostile forces of the world, both material and spiritual. Some of us may use Western Images, such as armed Athene as our Images of Sai Vikhë, but when we turn to Her as a Face of Dea, a focus of pure devotion, then in accordance with the practice of the use of living images, Durga is the best and surest form of Our Vikhelic Mother-Defender to place upon our home Altars.

Great Sai Vihkë, Mother Durga, you drove the demons from the world in time of direst need. Drive all demons from our hearts, and with your noble sword, protect us always.

Durga Defeats the Demon Part 1: An exciting video clip of the battle between light and darkness with commentary on the Oneness, Multiplicity and Trinity of Our Mother God.

The Defeat of the Demon Part 3: Again, not a sequel, but a summation of the Divine Victory to the ecstatic, loving and martial chant of of the Divine Name. We see that the Divine Warrior-Maiden is not merely a Hindoo Goddess but our Universal Protectress and Mother God.

The Story of Sai Rayanna: Video clip of the first Herthelan Empress and warrior-queen. The equivalent of Durga in an all-female society.