Our Lady of Guadalupe
Supreme Mother God of the Americas 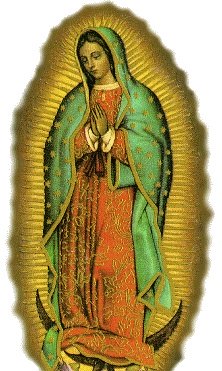 Our Lady of Guadalupe appeared on the 12th of December 1531 to a member of the defeated Aztec royalty.

She appeared on a certain hill. Not just any hill, but a sacred hill that had for centuries been crowned by a Temple to the Goddess Tonantzin (meaning Our Revered Mother). Tonantzin was, like many "goddesses", a survival into patriarchal times of the Supreme Mother God.

The Lady who appeared on that hill toward the Winter Solstice of 1531 bore a close resemblance to Tonantzin. Here is what Our Lady of Guadalupe actually said, translated from the earliest written account:

I wish that a temple be erected here quickly, so I may therein exhibit and give all my love, compassion, help, and protection, because I am your merciful Mother, to you, and to all the inhabitants on this land, and to all others who love me, invoke and confide in me.

I shall listen to their lamentations, and remedy all their miseries, afflictions and sorrows. And to accomplish the aims of my compassion, I direct that here in this place, a temple be built to Me.

She speaks as our merciful and compassionate Mother, the Regarder of the Cries of the World (to use her title from another continent).

The Temple of Our Mother God that was torn down by the invader must be restored and her ancient and eternal sovereignty as the compassionate Mother must be recognized.

On another of her appearances at this time, Our Lady of Guadalupe said:

Am I not here, who is your Mother? Are you not under My protection? Am I not your health? Are you not happily within My fold?

Naturally, it was only by assimilating her as Mary of Nazareth that the Temple was actually built. Such compromises have been necessary throughout the patriarchal era. They are part of the life of a fallen humanity.

She left her Sacred Image miraculously impressed on a cloak, or tilma, to be venerated in her Temple and throughout Mexico and the Americas. It is a truly miraculous Image, as many studies have shown:

The materials that compose the colors do not belong to any known chemical element. This fact was attested to by Richard Kuhn, winner of the Nobel Prize for Chemistry.

By laser ray projection, it was established that the colors hover above the tilma and do so at a distance of one hundredth of an inch above the cloth but do not touch it at any point.

A number of ophthalmologists have studied the eyes of the image. The first such study was undertaken by five ophthalmologists in 1956, two of them non-believers. The astounding result confirmed by all of them was that, when looking through an ophthalmoscope, it was exactly the same as looking at an ordinary human eye of a living person. The same results have occurred every time that the eyes have been examined by experts since that time. It was also noted that the eyelids show normal microscopic veins.

More important than these merely physical details is the iconography of the Image. Our Lady of Guadalupe is shown surrounded by the rays of the sun. She is not a "lunar goddess", relegated by patriarchy to lunar and earthly (as opposed to Solar and Heavenly) symbolism. She is the Radiant Sun, the symbol of Supreme Deity in traditional cultures across the world.

Just as Our Mother was the Sun throughout the pre-patriarchal world, just as the Devi Gita says:

Propitious Lady of all Nature, we prostrate ourselves to Thee forever. O Mother! Thou art the colour of fire; blazing like the Sun with the Light of Wisdom

Or as the Lotus Sutra says of Kwan Yin, the Regarder of the Cries of the World:

For there is only one Solar, All-Merciful Mother, by whatever name She may be called.

May Our Lady of Guadalupe – and of all the world – bless and keep you, now and always.

Or go to: Our Lady Mary's main page

Send Questions or Comments on Our Lady of Guadalupe