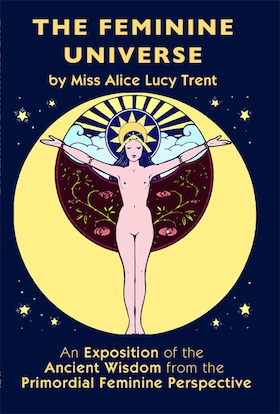 The seminal exposition of the Ancient Wisdom known as The Feminine Universe has been virtually out of print for some years. We now are proud to be able to offer this vitally important work to all seekers after truth in a new, updated and affordable, paperback edition.

The Feminine Universe shows how a single Ancient Wisdom, or Primordial Philosophy, lies behind all the great traditions of the world, from the Far East to the ancient Americas, from the Hindu world to the Celtic, and shows how this philosophy was originally a feminine-oriented spirituality which was edited and adulterated by patriarchal societies, but was never wholly lost until the later 20th century.

It is an exhilarating book which reclaims our feminine tradition and explains exactly what is wrong with the modern world and how it can be put right.

Within its 142 pages, this concise volume contains a complete philosophy, an entire view of life, which will be startlingly new to most people, but in fact is the most ancient wisdom in the world.

We present below a summary of the book's contents, together with links which will allow you to sample the preface and first chapter of this fundamentally important text on the world's most ancient wisdom and most modern need.

Contents of The Feminine Universe

XI. SECESSION AND THE HESTIA
This short chapter discusses the duality, developed during patriarchal times, between the feminine home-world or Hestia and the masculine public-world or Agora. Increasingly the Agora has been considered the only "important" world, but in fact until recently most of human life, including education, entertainment, and work centered on the Hestia. With the Agora of the post-Eclipse world hopelessly corrupt and not immediately redeemable, the creation of a re-civilized feminine world in the Hestia is an important way forward.
XII. WHAT THE FUTURE MAY HOLD
The final chapter looks at long-term tendencies in the modern world, particularly the possible renaissance of Eastern civilization. Discusses ways in which we may create a valid feminine culture.

This summary gives only a very partial impression of the scope of this ground-breaking book. It is not merely the only summary of the Primordial Philosophy, or Ancient Wisdom in its original feminine perspective; it is the only concise and complete summary of the Ancient Wisdom from any perspective. This alone makes it an unique and highly important book; but it also offers a complete view of history and interpretation of the modern world in the light of the ancient wisdom, discussing the significance of many currents and individuals.

The Renaissance, the patriarchal revolution, the worldwide cultural changes of the mid-first millennium BC, Nietzsche, Art Nouveau, T. S. Eliot, 19th-century Romanticism, late-19th-century "decadents", Plato, Marx, Freud, Jung, "Stream of consciousness" writing, Protestant Fundamentalism, Islam, and surrealism are among the many, many topics discussed and interpreted from the Feminine Essentialist point of view in this small but remarkable book.

This seminal text on the ancient wisdom and its modern applications is currently available only on Amazon.
In the United States the price is $19.90.