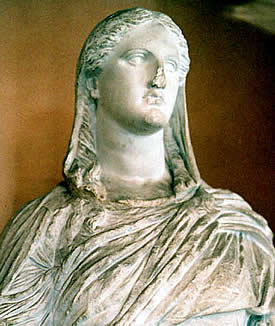 In considering the Greek Goddess Demeter, we come close to the heart of the Mother-religion of humanity.

We are also confronted with the ways in which the early patriarchy dealt with the still-powerful original religion: a complex mixture of preserving, destroying and subtly altering.

The very Name of the Greek Goddess Demeter is an ancient battleground between the Original Faith and the young patriarchy. Naturally, the patriarchy won. Look at nearly any etymology of Demeter and you will find its attributive meaning as "earth mother" or possibly "distributive mother": the first, or "earth", part coming from a supposed Indo-European root *dheghom of which there is no actual record and may never have existed. The "earth mother" derivation is now regarded as discredited by many modern scholars, although most popular sources still perpetuate it.

What we actually have is de-meter often anciently abbreviated simply to deo. The most obvious and likely etymology is "God-Mother" or "Divine-Mother", often abbreviated simply to "God". The famous philologist Eric Partridge supports this derivation, inviting us to compare it with Diana, which is an adjectival form of de/di, the oldest and primary Indo-European root for God (deity, divine).

This is the most obvious and probable origin of the name of the Greek Goddess Demeter. Why, then, is it so rarely acknowledged and so often overlaid with rather wild etymologies along "earth-mother" lines?

The answer lies in the early days of the patriarchy and a process known to archaeologists as "solarisation". Solarisation means the re-assignment of Solar and Heavenly attributes – formerly belonging to the Mother God – to new male deities. At the same time the Mother and Her Divine Aspects were relegated to a purely lunar and "earthy" function.

This strategy was particularly dominant in the Greek and Classical world (in Japan, for example, the Sun Goddess Amaterasu remained solar and other patriarchal strategies were adopted).

So the Greek Goddess Demeter, whose Name means simply Mother God (de=God meter/mater=Mother) is, by some rather contrived verbal gymnastics, converted into an "earth goddess".

As with most successful lies, there is a grain (pun intended and significant) of truth here. In the first place, in the original religion, our Mother God ruled the earth as well as being Queen of Heaven. It is the exclusive relegation of the feminine to the earthly and lunar that is the patriarchal deception (see The Earth Mother: a fallacy for all seasons for a detailed examination of this subject).

Secondly, the Greek Goddess Demeter represents a particular aspect of Deity with an important agricultural ritual and symbolism. She is the Mother God within Her own, very widespread cultus, just as Allah is the Father God in the cultus of Islam. Nonetheless, the particular religious emphasis of her cultus was upon the mystery of death and resurrection: the Mother God and Her Sacrificial Daughter. In fact, this is exactly the same religious stream that, in patriarchalised form, became the cultus known as Christianity. 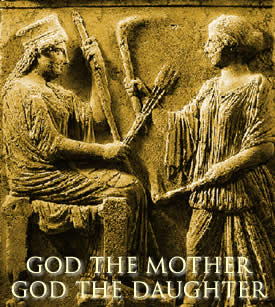 The corn-symbolism of this cultus may appear to support later interpretations of "earthiness"; but it is in fact precisely the same symbolism that associates the body of Christ with the bread of the Christian communion.

The Sacrificial Goddess was known throughout the world. Sumerian Inanna and Babylonian Ishtar go into the under-world and are slain. Indian Shakti is slain and dismembered. Chinese Kuan Yin, who gives up her Buddhahood for the salvation of all beings (which we shall see elsewhere is thealogically identical to the Sacrifice of the Daughter) is murdered and descends into hell.

In each case, the Goddess who enters the under-world in death re-emerges in triumphant resurrection, bringing with Her the restoration of the world.

We are dealing here with a mythos of fundamental and universal significance. In some later versions, the Mater Dolorosa becomes the Sorrowing Mother God of a divine son or male lover (Attis, Adonis, Osiris), and finally the Son becomes the offspring of a male God, with the Mother (at least officially) a mere human being.

With the Greek Goddess Demeter, we are close to the beginning of this process. Both the Mater Dolorosa and the Divine Child are feminine, and we have here one of the few examples, and certainly the greatest example, of the Mother and Daughter mythos to survive into patriarchal times.

It is true that the God of Death has become masculine (as opposed to the Queen of Hell in the Babylonian and Sumerian versions), and the story is woven (in different and sometimes conflicting ways) with the patriarchal pantheon; but in many respects we seem to be close to the original monotheistic Mother-Daughter cultus.

The Mother-Daughter cultus, now typified by the Greek Goddess Demeter and her Daughter Persephone, can be traced back long before 5,000 BC in the Mediterranean region. It was not always associated with the corn, but this association becomes strong in many later versions.

This is the grain of truth behind the vegetation/earth-goddess interpretation by which the patriarchy was able to "contain" and re-interpret this most powerful and ancient religion (the Eleusinian Mysteries of Greek Goddess Demeter and Persephone constituted the most important and prestigious Initiatic path in the Classical world until they were forcibly ended by the Christian Emperor Theodosius as late as 392 AD).

It is important to understand the real meaning behind such designations as "Corn Goddess".

The association of Deity with vegetative symbolism is found in all cultures and in the most philosophic traditions. The lotus-enthroned Devi of Hinduism is an important parallel here.

The lotus is rich in symbolism. Among other things, it represents the point at which the Divine, or Solar, Radiance touches the waters of First Matter, causing a world to blossom outward. Thus our Mother God standing upon the Lotus is an image of creation. 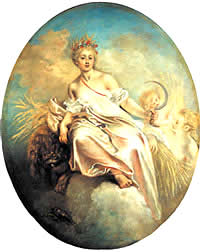 The corn comes from the earth (rather than the waters) but the symbolism is related. It flourishes at the touch of the Sun, manifesting the rich Solar Gold upon the field of matter.

But the corn also has a special significance beyond that of the lotus. It is symbolic of sacrifice and also of death and resurrection. The corn is cut down by the scythe of death and grows again.

In ancient times, no human activity was merely profane and worldly. The acts by which people sustained earthly life were also rituals by which they sustained spiritual life. The sowing, cultivation and reaping of the corn were sacred rituals, accompanied by chants and with their own initiations sacred to the Greek Goddess Demeter and her counterparts in other regions. The rituals of the temples and sacred places were continuous with the perpetual ritual of life itself – in this case agricultural life.

Many modern Déanists believe that the Mother-and-Daughter religion is most appropriate for Western people in this late Kali Yuga. It is already practised in patriarchalised form – as Christianity – throughout the Western world, and its deepest Western roots still visible to us lie in the cultus of the Greek Goddess Demeter.

What is Deanism? The worship of God the Mother

What is Filianism? A description of the modern Mother-Daughter religion