All About Easter
The Dawn of the World 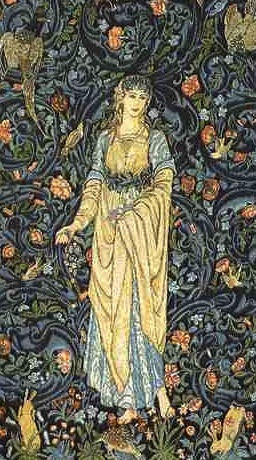 Eastre, or Easter, is the Great Feast of the Death and Resurrection of God the Daughter.

People who are new to this often imagine that it is taken from Christianity. It certainly does sound very similar, doesn't it?

Let us begin by looking at the word Eastre/Easter. What does it mean in relation to Christianity? Answer: absolutely nothing.

The name, as associated with spring/dawn, is so deep-rooted in human language that it goes beyond the normal linguistic "families". For example, we find the same syllables in the Japanese words asa (morning) and ashita (tomorrow – recall that in most languages, the concept of "tomorrow" is closely connected to that of "morning" – the new dawn, cf mañana, Morgen or the original English meaning of morrow).

So, when we say the word Eastre, or Easter, we are invoking the concepts of morning/dawn, of spring, and of the goddess who rules them. The word has no connection whatever with the Christian "Easter" mythos, except that it is connected with a goddess who dies and is resurrected, descends into the under-world and returns.

None of this should be very surprising. The mythos of the dying-and-rising god-savior is found again and again in ancient religion, and naturally this "god" began as Deity in Her original feminine form and was only "masculinized" by later patriarchal editing.

Why spring and dawn? Because spring and dawn are the equivalent points in the cycle of the day and in the cycle of the year. Spring is the dawn of the year. When cycles were more deeply understood, it was natural that the word for one should also be the word for the other. A very closely associated word is "east" – where the sun rises – and we may note that in the Wheel of the Year Easter comes at the eastern point of its "compass".

However, the cycle runs deeper than that of mere this-worldly events. "As above, so below". Things of the world are but reflections of those things that transcend, predate, and are the causes of all worldly being.

We are here dealing with something fundamental to being. Something that goes deeper than any merely physical science can into the very questions of what existence is and why there is any universe at all. We are entering into regions that are beyond our limited human understanding, but which have been explained to us from the beginning in terms of a mythos that we can understand and relate to.

We know that there is ultimately only one Reality, and that is the Absolute, the Divine, the Atma. We also know that there appears to be a universe and beings (such as ourselves) that exist separately from Her.

How can this be? How can there be a world apart from the Sole Reality? This is the Mystery of Manifestation. The Sole Reality manifests some of the infinite potentialities that lie within Her "outwardly" in the form of a universe. Thus, from our perspective, She is the Creatrix of the world.

However, in order to maintain a world in apparent separation from Herself, She must enact a paradox, since if anything were truly separate from Her, it would instantly cease to exist, because She is existence. Therefore She must come to the place-where-She-is-not.

the Mistress of All Things rose to Her feet. For She had conceived a Daughter that was not separate from Her, but one with Her, and the Child of Her Light.

The Daughter is the Lesser Light of the Mother. While the brightness of the Solar Mother is "too great for us [i.e. the manifest cosmos] to look upon" the Daughter's Lunar light reflects upon, and sustains, manifest creation. [Naturally we are speaking of the supernal and universal Solar and Lunar principles here – not merely of the astronomical bodies that providentially reflect them for our particular world-system].

Thus the feminine Holy Trinity (or so-called "triple Goddess") of Mother, Daughter and Dark Mother, are, like the Hindu Trimurti, respectively the Creatrix, the Sustainer, and the (ultimate) Destroyer of manifestation.

The Daughter protects manifestation by being present in every part of the manifest cosmos, even the very lowest: descending "into the nether regions, giving up the Divine light and going down into that place wherein is no light, but only the profoundest darkness".

With the descent of the Daughter into the nether regions, the world is subjected to that cutting-off from the Divine Source of Being that would have happened if the Daughter had not existed. And when the Daughter is slain, the world's source of existential sustenance is severed:

1. Now from the time when the Daughter of Heaven had passed through the first gate of Hell, a barrenness had fallen on the earth; and neither bird had sung nor any flower showed its beauty forth; nor was there joy in any heart. 2. But when the Maid was slain upon the pillar of the world, an awful darkness fell on all the earth. 3. And the rivers of the earth ceased to flow, but drained away into the salt sea, and the sea ceased to move, but stood still in awful stagnancy.

Note the imagery of the rivers ceasing to flow. The river is a symbol of the connectedness of all things to their Source. It is precisely this connection that is severed here.

This is the Divine Sacrifice upon which the existence of the cosmos is founded.

Within the Wheel of the Year, Eastre is the three-day event that marks the end and the re-beginning of the cycle. The three days are as follows:

Kala: Moura 28th (March 19th, or 18th on leap years). Kala is the last day of the year. It is also the last day of the fifth season and thirteenth month of Moura which leads up to the Kala event. On this day, Our Lady passes through the Seven Gates of the realm of the Dark Queen and is slain upon the Pillar of the World.

Hiatus: No date. This day does not "exist" in the Filianic Calendar (March 20th, or 19th and 20th on the two-day hiatus of a leap year). This is the Day that Has No Date – the Day that Is No Day. On this day Our Lady is dead and the cosmos is dying. All statues and pictures of Mother and Daughter are covered in dark veiling. On this day one should try to avoid referring to, or even thinking of, the future. One should act as if this were the Last Day. This is a hard discipline and almost never can it be done perfectly, but even the attempt gives a very profound sense of the Ending and enables one to experience the Resurrection and New Year at a surprisingly deep level.

A special chant used during the Hiatus may be found here. 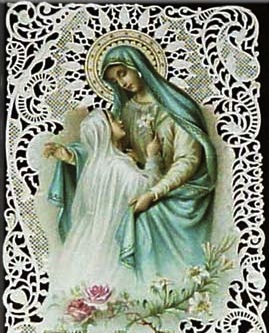 "And Her Daughter rose again and was alive again. And amid tears of joy, They embraced and were one."

Resurrection/New Year: Culverine 1st (March 21st). This is the first day of the year, the day of the Resurrection of Our Lady and the Rebirth of the World:

20. And when they beheld Her, the children of the earth rejoiced, and the rivers flowed again, and the sea began to move.

21. And the children of the earth cried: lift up your voices in song and laughter, for the Princess of the World was dead and is alive again, was broken and is whole; and there is no place whereto Her joyous rule does not extend. 22. Give praise to the Mother of All Things and praise to Her Daughter.

23. Rejoice, for the world is renewed.

After the preparation of Moura, the sacrifice of Kala, and the strange non-time of the Hiatus, the sense of a complete world-renewal for believers is almost uncanny. Our alignment with the world's most ancient ritual system, and with the fundamental mythos that underlies cosmic manifestation, is remarkably powerful, for we are participating in the world's most ancient "magic" – the "magic" that is creation itself.

And with the world-renewal of Eastre, we enter upon the great cycle of Festivals and Mysteries that is the Wheel of the Year.

All Scriptural quotations are from The Gospel of our Mother God

Origin of the Easter Egg

The Heart and the Moon-Axe

Send Questions or Comments on Easter