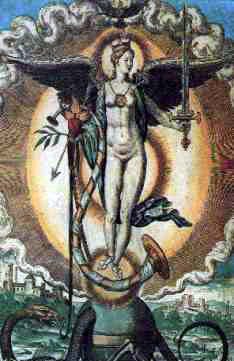 Metaphysics is the title we have given to this section of our Chapel. It is a broad title and one that could be misunderstood, since it has been used in a variety of ways. Let us therefore explain what we mean by it.

Metaphysics, in its traditional definition, is, quite simply, all that lies beyond physics: and by "physics" the ancients very properly meant "all that is physical". In other words, "physics", in the traditional sense, is the whole domain studied and recognized by modern "science", not simply one division of it.

We place "science" in inverted commas, because the word science (scientia) means simply "knowledge", so the current custom of using the word "science" to mean physical science alone (or "physics" in the traditional sense) is inherently tendentious. It implies that physical science is the only science: a position that would be hotly disputed by the whole of human civilization outside the very special area of ideology created in Europe from the 17th century onward and gradually exported (often by force or the threat of force) to the rest of the world.

This force is not incidental, since the whole claim of the rationalist, or scientistic, view of the world to represent a Truth that supplants all previous Truths is based on its material effectiveness. "We can make bombs, aeroplanes and computers, therefore we consign all other forms of wisdom to the dustbin of history".

Of course this claim is not made by physical science itself – which by definition must be neutral on all matters beyond the physical – but is made by those who have made (physical) "science" into a wisdom-substitute. And that, remarkably, includes a great many "religious" people.

Obviously this does place us in dispute with that "scientistic" superstition which assumes, with varying degrees of explicitness, that whatever lies outside the domain of physics does not exist.

In this we are at one with the whole of human civilization outside the West of the past few centuries.

Like them we pay attention not only to physics but to metaphysics.

A slightly more rational objection to metaphysics is that which, while not denying the non-physical levels of being, holds that, since they are not prehensible to the five senses, we can have no objective knowledge of them. This is in accordance with the "democratic" prejudice of rationalist ideology which accepts only that knowledge which is (at least theoretically) equally accessible to everybody to be valid.

Direct access to metaphysical knowledge comes only with a high degree of contemplative advancement and normally with a valid traditional initiation. But then direct access to the higher levels physical science comes only with much study and teaching. Most people accept the truths of their culture (whether the "scientific" world-outlook or a traditional one) on faith, assuming that the sages of their cultures know what they are talking about.

The "scientistic" outlook claims that science is verifiable a) by its successful application and b) by the fact that all scientists agree on the same facts. In actuality, the effective application of a theory does not prove it to be true. James Watt constructed his steam engine using a theory of steam-pressure later discovered to be erroneous. To be effective, a theory needs only to create a model that accounts for, and predicts with sufficient accuracy, the facts being manipulated for a particular purpose or set of purposes. It does not have to be "true".

As for "scientific agreement", anyone who has read academic scientific disputes will be aware that there are huge areas of disagreement among scientists.

None of this is intended to belittle the achievements of physical science; only to place them in their proper perspective.

Metaphysics is quite as exact a science (or rather group of sciences) as physics. Its fundamental premisses and principles are agreed on throughout all traditional cultures. As we shall continually see in this site, the same fundamental metaphysical truths – sometimes expressed in different "languages" but nonetheless clearly translatable between each other – are found throughout the world, from the great world-civilizations to the tribal and folk-traditions of the earth.

In the words of Ananda Coomaraswamy:

The content of folklore is metaphysical. Our failure to recognize this is primarily due to our own abysmal ignorance of metaphysics and of its technical terms...

The actual unity of folklore represents on the popular level precisely what the orthodoxy of an elite represents in a relatively learned environment... To a very large extent both employ precisely the same symbols, which are taken more literally in the one case, and in the other understood parabolically; for example, the "giants" and "heroes" of popular legend are the titans and gods of the more learned mythology, the seven-league boots of the hero correspond to the strides of an Agni or a Buddha, and "Tom Thumb" is no other than the Son whom Eckhart describes as "small, but so puissant". So long as the material of folklore is transmitted, so long is the ground available on which the superstructure of full initiatory understanding can be built.

As will be readily seen, Dr Coomaraswamy is speaking of the various patriarchal traditions while we speak of the feminine perspective. Nonetheless, all metaphysics has in common the same fundamental technical vocabulary and body of truth, just as all physics agrees upon the periodic table and the laws of thermodynamics.

We use the term metaphysics in a very broad sense, as designating the whole field of knowledge that lies outside the area delimited by physical science. Metaphysics is not the subject of this site, but it is something of which modern Western education and culture leaves people woefully ignorant. And since that "something" is in fact the entire "other half" – and indeed the superior half – of human knowledge, we shall be forced to sketch in some of the most basic metaphysical concepts as a precondition of any intelligent discussion of other subjects.

Metaphysics, to a large extent, speaks in the language of symbols. For this there are two reasons: a lesser and a greater.

The lesser reason is that, speaking of non-physical things, it is necessary translate them into the terms of the world of time and space in order that they can enter the discursive universe of our spatio-temporally based languages.

The greater reason is that the cosmos itself is a symbol-system crystallized in matter. All manifest things, physical and non-physical, are Essences, or "Divine Ideas" which take form upon contact with Universal Substance. This is a complex truth and one that we shall not digress to explain fully on this page.

However, we should understand that the key to metaphysics – and to dispelling the errors of modern Western substantialism – is to realize that symbols (true symbols as opposed to human-created allegories) are not mere products of human thought and imagination, but are the underlying Forms of the universe itself.

We inhabit a universe that is both intelligent and intelligible; and our own intelligence is a microcosm of the Cosmic Intelligence. That is why we are capable, in our own degree, of understanding the cosmos. It is this that makes even physical science possible. But physical science, which, on principle, restricts its enquiries to the quantitative, "horizontal" (or substantial) dimension while ignoring the qualitative, "vertical" (or Essential) dimension, cannot interpret the symbolic quality of the universe.

This is not a criticism of physical science. Physical science is a method. The method lies in this particular restriction of vision in order to produce results strictly limited to the physical plane. Only those who treat the method as a superstition, imagining that it can "disprove" metaphysics (as if plane geometry could "disprove" the third dimension) turn "scientism" into an error.

One definition of metaphysics is that it is the science – or group of sciences – that interpret the symbolic dimension of being and thereby consider all that lies behind and above physics.

With the Grace of Our Mother God, we hope to provide the necessary tools and information to make the understanding of metaphysics possible to our readers.

The Feminine Universe: the cardinal text on metaphysics

The Image of the Cosmos: Is the traditional mythical metaphysical view of the cosmos in contradiction with physical science? What do we lose when we lose our traditional understanding of the universe and our place in it?

The Metaphysical Meaning of Color

Science, Truth and Logic: Can science teach us truth? And if not, why does it think it can?

The Theory of Evolution

Send Questions or Comments on Metaphysics