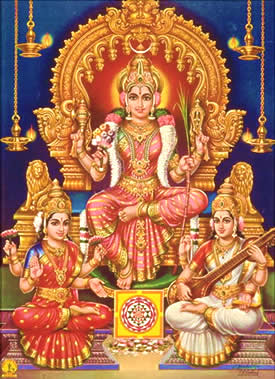 Our Mother God has many Names, but perhaps of all those Names, Lalita comes closest to Her original Form.

While every living cultus of Dea in the late Kali Yuga has some patriarchal elements, at least in its theory, Sri Lalita comes very close, even in the doctrine of her patriarchal adherents, to the original and unadulterated worship of Dea.

On this page we shall take a look at some of the more important facts and doctrines relating to this most glorious and beautiful Name and Form of Dea. We think you will be enchanted and filled with adoration at how perfectly, even in this Kali Yuga, the ideas associated in traditional Scripture with Sri Lalita echo the purest and most ancient worship of Our Mother God.

The name Lalita means "She Who Plays", and play (lila), refers to the creation and sustaining of the Universe. Sri Lalita is quite unequivocally our Creatrix.

Those who worship Her as the Supreme Deity do so fully and fervently. The Tantrarajatantra explains how Lalita took the form of Krishna for the salvation of the gopis (cowherd-girls). By this we may understand that all male god-forms are actually forms taken by Dea that souls may still be saved in a patriarchal world. Naturally, whenever a human society allows it, She will take on Her original and most Salvific form of all.

In the the Lalitopakhyana, this very important question is posed:

What can be done to save the weak and ignorant the souls that inhabit the Kali Yuga?

The answer is that there are two possible paths:

a) After renouncing all worldly things, one can, by long discipline and meditation, attain knowledge of the formless, attributeless Divine. This way is very difficult.

b) The second method is to worship the Divine Mother who is the form of God with attributes. Even a sinner can do this worship. There is another advantage in this Way. The devotee can simultaneously have enjoyment and attain salvation by following it.

The last part of this Scriptural statement mirrors the important words of the Great Hymn to Mahalakshmi:

Thou Art the Giver of Intelligence and success
And of both worldly enjoyment and liberation.

The close parallel is not surprising, for Sri Mahalakshmi is considered to be a form of Sri Lalita.

In many other contexts, a similar pattern is found, of the sure and direct path being through Our Mother: in mediaeval representations we see the Red Ladder of Jesus, from which many souls fall off into the fires, and the White Ladder of Mary, on which every soul is saved. The idea that the Way of the Mother, in Her true feminine Form, is the safest and surest is found throughout the world.

Lalita has three forms: the maiden, Bala (or Bala-Sundari); the Mother, Sundari (or Tripurasundari, or Sundari the Beautiful); and the "Crone", Tripura Bhairavi (who is actually depicted as a little more mature in human terms, but not aged. As explained in our page on The Triple Goddess the term "Crone" does not necessarily – or usually – imply taking the form of an old woman).

As with other instances of the Triple Goddess, the Triune Deity is often known simply by the Mother-Name of Tripurasundari. The term Lalitha Tripurasundari is used to depict Her in Her trinitarian aspect.

These three Persons of Lalita are quite explicitly identified as the Creatrix, Preserver and Destroyer of the Universe. 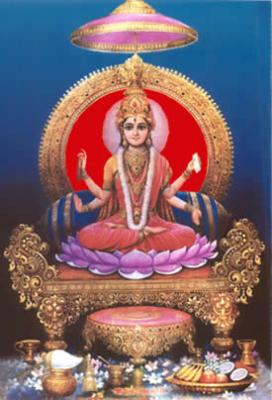 Déanists will be delighted to find that in images of Sri Bala-Sundari we are able to see canonical Images of the very young Daughter, like the one shown here.

It is also made very clear that the Daughter is the Mother, paradoxical as this may seem.

In the picture at the head of this page we see the Daughter in red, symbolising Her active nature, Tripura Bhairavi in white, symbolising Her transcendence of all form or colour (varna) and the Mother in a pinkish shade, showing that, in this Trinitarian iconography, She is between the two. She is in the Lalitasana or Posture of Royal Ease in that form in which the left leg is in the Lotus posture, again showing her as passive on the side of Bhairavi and active on the side of Bala; or receptive to Absolute Deity and active/giving to Her Daughter.

This is a rare and beautiful Trinitarian icon that exists within a still-active stream and is suitable for devotional use in the current Era. Indeed Her worship is currently spreading beyond India, with the well-known Hindu saint and missionary Mata Amritanandamayi (known to her devotees as Amma – Mother) strongly encouraging Her daily worship as a means of purification and salvation in this late Kali Yuga.

The saint has this to say about Sri Lalita:

She is Jagadamba, or Mother of the World. Her love for all is supreme. She constantly showers upon humanity Her love and grace, and She is known for Her all-giving nature. Her goal is to have humanty return to the ultimate state of oneness with Her... What can humans offer such a Mother who loves them, takes care of them and gives them Her bounty? Praising such a Mother and offering Her gratitude is the essence of Sri Lalitha Sahasranama [the chant of Her Thousand Names].

Although some patriarchal accounts bring Sri Lalita within the "consort system" and many devotions, with the usual all-inclusiveness of Hinduism, include titles implying this as well as those implying Her Supreme and Absolute Divinity; it is clear that Her pure worship sees Her as the sole Deity, Creatrix, Preserver and Destroyer of the worlds.

As it says in the Lalitha Mahatmya:

Goddess Tripura guarantees worldly enjoyment and liberation to her devotees... The Goddess has no beginning and is the support of everything in the universe.

She is the true Form of God-with-Form (saguna brahman), and God-beyond-Form (nirguna brahman) is also not other than Her.

Most Holy Lalita, Mother and Creatrix of the universe, we adore you in your threefold loveliness, we worship before your Solar Lion-Throne that stands at the centre of your Paradise Island, set in a sea of nectar.

We know that You alone can save us in this dark Kali Yuga.

Mother of all that is, please enter our hearts as the love that can adore You: for we are very little children, and even to love You we need Your help.

The Filianic Creed: A statement of the modern Trinitarian religion of Our Mother God

Send Questions or Comments on Lalita