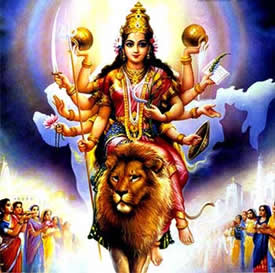 Durga ma – this loving title combines the Vikhelic battle-maiden aspect of Dea with Her absolute Divinity as the loving Mother of all beings.

Even in defeating and killing the demon king, Mahishasura, Durga ma restores him to harmony and brings about his salvation.

This is in accordance with the Déanic doctrine of Universal Salvation. In the end even devils must be saved and return to Dea: for only She is real and the unreal cannot last.

The idea of an eternal hell is metaphysically as impossible as that of an eternal earth, for only that which is fully united with God can be eternal. Thus, in the end, all beings must be saved, "even to the last blade of grass".

Durga ma, as depicted in the Devi Mahatmya, has been compared to Vishnu. In the attempt to bring Her Image into line with patriarchy she is sometimes depicted as the consort of Shiva, but the comparison to Vishnu is far more to the point when we see her – as does the Devi Mahatmya – as Pure Deity, "the One without a second".

Vaishnava (Vishnu-worshipping) doctrine lays stress on the fact that when the Celestial Harmony is disrupted on Earth, the Divine may descend to set things in their proper order. Krishna is such a descent (avatara).

This is precisely the doctrine that applies to the descent of Durga ma in the Feminine Deism of the Devi Mahatmya. While a patriarchal redaction sees her as the creation of the gods, the Devi Mahatmya makes it clear that She is eternal, without beginning or end, and is infinitely superior to all gods, titans, angels and demi-deities. She is the Supreme Godhead; the One without a second. In the Tantrarajatantra it is explained that even Krishna is really a manifestation of the Supreme Mother God.

In this video clip there is less concentration on the nature of Dea Herself. Our previous clip showed Her Trinitarian Nature and Her Multiplicity-in-Unity. This clip largely concentrates upon Durga ma in her many-armed singular form (although the many arms represent the multiplicity of Her potencies).

It also shows very clearly the superiority of Our Mother God to all the demigods. She begins by rescuing two who have been seized by the demon; and then, throughout the battle, the entire pantheon of demigods can only look on as She fights the near-omnipotent demon whom all their powers have been helpless to resist.

But true omnipotence belongs only to Our Mother God – not to any demon nor to all the demigods combined. At one point Mahishasura throws a entire mountain at Durga (represented in this clip by a large rock), but She is the Creatrix of all the mountains and all seas; the furthest suns and all the starry heavens. Her spear easily reduces the mountain to dust.

Still Mahishasura is not a foe to be easily dismissed. His power is greater than that of all the demigods combined. When Durga's skilful warrior-craft finally inflicts upon him what seems to be a mortal wound, his blood falls in drops upon the ground, and each drop of blood becomes a new Mahishasura.

The relief of the demigods at the apparent victory of their Saviouress now turns to terror.

Yet the unlimited power of Durga destroys the multiplicity of demon kings, and this time she calls upon Her own Form as Kali to drink the blood of the demon, preventing him from regenerating from his spilled blood.

In this action we see how Durga ma destroys Her enemies not truly by killing them but by re-absorbing them back into Her own Self, which is the true Self of all souls; and how, in Her infinite mercy, even Her defeat of the great demon becomes his salvation.

Having restored the Divine Harmony, to the delight of both mortals and demigods, Durga ma, the warrior-Form of the Mother of the Universe, reverts to Her more maternal aspect.

Central to the religion of Our Mother God is the concept of Harmony or thamë. When that harmony is disrupted, She descends to Her created world to restore order. Patriarchy may be seen as a disorder of Kali Yuga that is, to some extent, part of the greater order of the entire Historical Cycle. And yet, in a Providential way, the story of the defeat of the demon by Durga ma paved the way for the return of the recognition of Our Mother God as Supreme Deity in parts of India.

Thus the defeat of the demons of disorder may work on more than one level and with results that mitigate even the conditions of Kali Yuga itself.

Thus, just as the story of Sai Rayanna is central to Herthelan culture, so the story of Durga is a central truth for all who wish to devote themselves to the religion of the Supreme Mother God.

And indeed, are they not ultimately two renditions of the same Eternal Event? An event that takes place whenever our Mother God is needed to descend to any of Her created worlds to restore the Divine harmony.

Jai Durga Ma! With Your mighty sword You right all wrongs and defend Your children. Let us poor exiles of a patriarchal age return to the sanctuary of Your Divine protection.

Durga ma defeats the Demon another video clip of the great battle of Light and darkness, concentrating on the Trinitarian nature of Our Mother God and Her Unity-in-Multiplicity.

The Defeat of the Demon Part 3: Again, not a sequel, but a summation of the Divine Victory to the ecstatic, loving and martial chant of of "Durga hai meri ma". We see that the Divine Warrior-Maiden is not merely a Hindoo Goddess but our Universal Protectress and Mother God.

The Story of Sai Rayanna, the first Herthelan Empress and warrior-queen, the equivalent of Durga in an all-female society.

Return to our main Durga page