Demeter and Persephone
God the Mother and God the Daughter 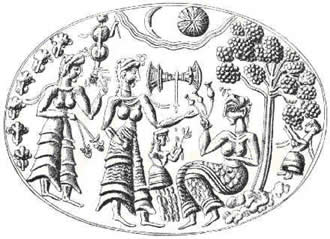 If God is our Mother, has She also a Daughter Who died for us? The myth of Demeter and Persephone sheds an important light on this question.

If God is our Mother, has she also a Daughter Who died for us?

At first the question seems absurd. Is this some strange feminine parody of Christianity?

As a matter of fact, it would be fairer (though still unfair) to say that the central mystery of Christianity is a masculine parody of the story of Demeter and Persephone.

The death and resurrection of the Child of God is one of the oldest stories in the world, and the feminine version long predates the masculine.

Babylonian Ishtar and Sumerian Inanna descended into the Underworld of Death and were triumphantly resurrected. Kuan Yin was murdered and entered Hell, only to return for the salvation of all beings. In the myth of Demeter and Persephone we have the explicit representation of God the Mother and God the Daughter: a cultus that is represented in icons going back long before the patriarchal era and which survived in a somewhat "compromised" form until near the end of the Classical era.

Even in patriarchal times, the story of Demeter and Persephone is far more than one "mythic tale" among many. It formed the basis of the central mystery of the Classical world.

The Eleusinan Mysteries of Demeter and Persephone were the spiritual centre of Graeco-Roman civilisation; considered the most effective – and certainly the most prestigious – of all Initiations. Members of an educated elite travelled from all over the classical world to Eleusis, to undergo a rigorous ritual process (much of which was so secret that it remains unknown to this day) by which they "died" with the Goddess Persephone, and were "born again".

The importance of this most ancient cultus of Demeter and Persephone to the Classical world remained undiminished, until near the end of that world, in 392 AD it was banned by the Christian emperor Theodosius.

In one sense, the wheel had come full circle. The cultus of death and rebirth, through which the devotee was "born again" had once been the primary faith of many agrarian Mediterranean populations. In later classical times it had become the preserve of a small elite. Now it was re-democratised in the form of a new cultus open to all.

In another sense a process was completed that had been in motion since the dawn of the patriarchy. In the earliest representations of the story of Demeter and Persephone, only the Goddesses were present. As the patriarchy gained power, the story was changed. Persephone, instead of going of her own free will into the underworld, was abducted by the (now male) God of Death and became his captive bride. In the stories of Ishtar and Inanna, male "consorts" were introduced. In the legend of Isis, the Dying Goddess became the male Osiris.

The Christian version completed the process. At last all protagonists were male and every trace of the Mother God and Her Sacrificial Daughter were erased. Even here, though, the Virgin Mary – technically a mere human – emerged as Queen of Heaven and the traditional Mater Dolorosa. Like the living grass under concrete paving, elements of the original religion keep emerging through every crack. 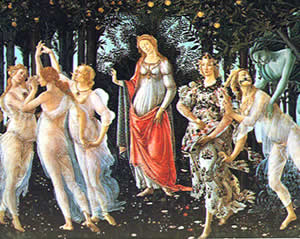 The story of Demeter and Persephone, in the form handed down to us, not only preserves the sacred image of Holy Mother and Divine Daughter: it also, rather curiously, presents a picture of the patriarchal incursion itself.

We begin in the feminine "Eden" of Mother and Daughter, when a shadowy male figure intervenes and snatches the Daughter away, precipitating disaster for the whole world.

Where other Goddesses are depicted as happy to have male consorts, underwriting the patriarchy, Persephone remains a captive bride, and finally a compromise is arrived at whereby she returns to the upper world for half the year, during which it is warm and fruitful, and spends the other half with her enforced "consort", during which time the upper world is cold and barren.

It is possible that we have here the remains of the matrifocalist or déanic reaction to the patriarchal revolution, preserved in the cultus of Demeter and Persephone which proved too strong entirely to eradicate.

Be that as it may, we return to our original question:

If God is our Mother, has She also a Daughter Who died for us?

The answer to this is: yes.

Many worshippers of our Mother God focus exclusively on the Mother, and this is perfectly wonderful. To love our Mother God is all that really matters. In modern religion, the sacrificial side largely survives in the cultus of Quan Yin Who has refused Buddhahood for the salvation of all beings: for our salvation.

We shall be talking about Quan Yin very soon and discussing the thealogical identity between Her Sacrifice and that of the Daughter.

Modern Déanists have a half-yearly cycle of festivals which celebrate the birth, life and death of the Daughter, and for women living in a Christian or post-Christian society, this can be immensely rewarding.

Should we call the Mother and Daughter by the names Demeter and Persephone? Let us remember what their original followers called them.

De-meter means simply God the Mother. Often it was abbreviated simply to Deo – just God. To them, as to us, it went without saying that God is Our Mother. Persephone was normally called Kore, meaning simply the Maiden or the Daughter.

Our image is not the patriarchalised one of sorrowing Demeter and Persephone snatched by a male God. It is the story of the Daughter nobly walking "of Her own free step" into the Gates of Hell, Her death and her eventual rescue by Her Mother.

Finally we see the flowers blossom beneath Her feet as the Resurrected Daughter returns to the world to save every being, "even to the last blade of grass".

The Holy Mother and the Divine Daughter. Demeter and Persephone if you will, but by any name, our salvation.

The Filianic Creed: The complete statement of the modern Mother-Daughter Faith

Greek Goddess Demeter: A Journey to the Depths of the Mother-Religion

Send Questions or Comments on Demeter and Persephone