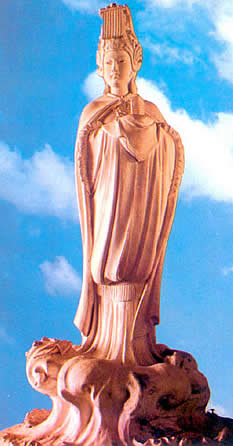 Ma-tsu (Mazu in Hanyu Pinyin) is one of the major Taoist feminine deities worshipped in many parts of China as well as in Okinawa, Taiwan and Vietnam.

The very word Ma-tsu is the combination of two letters, "mother" and "ancestor."

If we look at these two elements, we see that "Ma" and its derivatives (including Mary) meaning "Mother", both Divine and human (and also being connected with the sea), is the single most universal survival of the Primordial Language occurring in just about every human tongue, precisely because Our Mother God is our one Source and Origin, as well as our final Home; and therefore the single most fundamental concept in the human psyche.

The concept of Dea as the Supreme First Ancestress, while most obvious (and most often patriarchalized) in the Eastern practice of so-called "ancestor worship" is present in the cult of Sai Rayanna among Herthelans, of Eve/Mary in Europe and many other forms of Our Mother God.

In conventional Chinese legends, Ma-Tsu was believed to be the deceased Lin Moniang (b. 960 CE-d. 987?), who lived in Fukien (Fujian) and is thought to have died in attempt at saving her family from a typhoon. However, the symbolism, titles and iconography associated with this Deity strongly link her to the primordial and original feminine symbolism of Dea.

For instance, she is referred to as Tian Hou (Tin Hau, in Cantonese) -- the Empress of Heaven, and Tian Fei, the Heavenly Princess. The Vietnamese call her Thien Hau Thanh Mau [Thien Hau Thanh Mau, which corresponds to Tianhou Shengmu in Hanyu Pinyin], which means "The Heavenly Empress, Holy Mother." These designations closely parallel to those ascribed to St. Mary.

She is also known as A-ma (the "Grandmother") which sounds very much similar to many of the ancient names of Dea throughout the world.

Iconographically, the statues of Ma-tsu largely resemble those of Kuan Yin (untrained Westerners often confuse her with Kuan Yin, in my experience). Like Kuan Yin (and Our Lady Mary), She is frequently depicted standing over waves of the sea.

As with the Western, Christian cultures, the primordial feminine form of Dea is revealed in the Asian cultures despite the mostly patriarchal teachings of Taoism and Confucianism.

Send Questions or Comments on Ma-Tsu