The Apostles Creed
and the Conception of God the Daughter 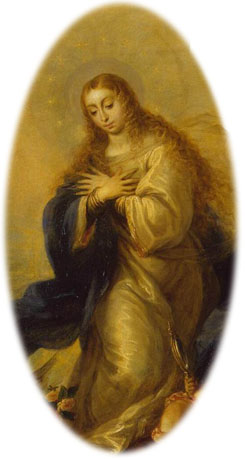 This discussion of the Apostles Creed from a Filianic standpoint raises some fascinating points about the Trinity, and in particular the conception of God the Daughter.

This is a translated version of the Apostles Creed. Now, while I very much like the Filianic Creed and am working to learn it, I found I wanted a version that sounded more familiar. This version, which I've dubbed the Maiden's Creed, has twelve statements like the Catholic version.

'I believe in God the Mother, almighty, creatrix of heaven and earth

I believe in [name], the Divine Daughter, our Lady

She became Maid and descended into Hell

I believe in the Holy Spirit, Who is the Beginning and the End

I believe in the Angelic Powers, and the Godhead of each

I believe in Thamë, the Eternal Law of Cosmic Beauty

The forgiveness of sins

And the Ascension of the soul, amen.

On the Apostles Creed – is "Holy Spirit" being used here for "Dark Mother"? I think that is a possible usage. Essentially, Holy Spirit must mean the Atma and since the Dark Mother is nirguna brahman (Deity beyond Form) I think the association is at least possible.

However, I am a little unsure about:

Since this is taking over a clear reference to the Spirit as a "brunette" fecundating principle complementary to the "blonde" (or "female") birthing principle.

As a possibility this is perhaps sustainable, but as an article of faith (in a creed) it seems too – well, is it really what most of us believe?

I am definitely in favor of the Godhead of the Angelic Powers. Of course Christian arguments over what is and is not Godhead are a bit over-literal. In one sense the Janyati are Angels and in another sense aspects of Dea. But to assert their ultimate Godhead, I feel, is a good corrective to the "Abrahamizing" tendency of the Tellurian West not to understand the Deity of the Janyati.

Thank you very much for your post, Lady Aquila!

There were some lines in the Apostles Creed I was having trouble with, and to be honest, I’m not quite sure how to describe the act of Conception, but I was certain that the Holy Spirit and Mother were somehow communing or combining to create the Daughter within the Mother. It always seemed like a grand Mystery to me. The way I thought of it for the line was the Power (or Energy) of the Spirit (The Dark Mother) engulfed the Mother and from their spiritual union the Daughter was conceived.

Though now that I think of it it does seem a bit blonde-brunette to be put that way.

It is probably best to have a new line then.

... It seems I had made a mistake – In the Mythos 1 v. 4 is said She ‘communed with Her own Self’. I thought it had said ‘Her Spirit’. (I need to stop reading by the light of my bed-lamp)

Not quite as lengthy but easier to remember.

This Apostles Creed discussion is indeed an interesting correspondence.

To what extent the Dark Mother can be likened to the Christian Holy Spirit is a matter for much thought. Certain quasi-Christian (Collyridian) Filianists make this assimilation regularly.

Now, in some ways the Christian Holy Spirit can seem like a rather tacked-on "comforter" (paraclete) not really organically necessary. People unaware of history sometimes suggest that the Filianic Trinity is modeled on the Christian, but actually it is much closer to being the other way around. The Christians had to think up a third Person because they knew it had to be three – because it always has been three. But sometimes it seems that the Christians weren't quite sure why.

However, I do believe that Christianity has been guided by the Atma (or Holy Spirit) and that its threefold division of Godhead must ultimately reflect Reality.

That the (Christian) Holy Spirit was the "male" begetter of Jesus was one way of giving that Person an organic role in the Trinity. I am not sure how far this is really a part of most people's understanding of Christianity, but certainly the Apostles Creed made a brave attempt to cement it there.

The story of the Conception in the Gospel of Our Mother God is a very interesting passage thealogically.

1. When the first night had come upon the world, the Mistress of All Things stood alone once more, as She had in the beginning. 2. For a terrible abyss had opened to lie between the world and Her, and Her creatures could not look upon Her brightness.

3. And She stood in contemplation upon the waters of the first darkness; like a great Dove upon the waters She brooded. 4. And She became absorbed within Her and communed with Her own Self; and Her light ceased to shine forth from Her, and yet Her light grew greater. 5. And She fell to Her knees. And the surface of the waters became turbulent, and the great waves curled over Her, and their white foam could not be seen in all that darkness.

6. And when the waters became calm again, the Mistress of All Things rose to Her feet. 7. for She had conceived a Daughter that was not separate from Her, but one with Her, and the Child of Her Light.

The aloneness of the Mother is clearly emphasized. But this aloneness is separation from Her creation – because it has turned from Her and would now be destroyed by the very brightness of Her Solar Being if She were to "approach" it (hence the need for the Lunar Mediatrix – the Daughter).

Two things are interesting in the light of this discussion of the Apostles Creed. First the phrase "[She] communed with Her own Self" – which you, honored Miss Celestalis, confused with "Her own Spirit". The confusion was perhaps not purely accidental. When contemplating Scripture, many things that might seem accidental are not.

As Honored Lady Aquila says, the "Holy Spirit", of the Apostles Creed and Christianity in general, can only, in a broader context, mean Atma the Spirit in the highest sense of the word (Whom the Daughter often refers to as "the Spirit, My Mother" but also associates with all beings in their highest realization).

Now Atma actually has three main meanings that are closely interwoven: Spirit, Breath and Self (meaning the Supreme Self of all being). Terms derived from Sanskrit Atma are still used in Sanskrit-derived languages like Hindi to mean "myself".

The other interesting point of this story is the sea, which is both the resting-place of the Mother and "curl[s] over Her". The sea, or the waters, are maya or, in Western terminology, materia prima which takes on created forms precisely when touched by the vertical ray of the Spirit. This is often depicted in the form of a lotus blossoming upon the waters where the feet of the Mother touch them.

But at the same time, because Filianism is ultimately non-dualist, even maya is part of our Mother. So what of the waters – deprived of Her light – actually curling over Her? Is it in some sense a prefiguration of the Daughter's Sacrifice – Dea placing herself under the power of "matter"?

Or, in the unlighted waters of all-potentiality, do we see the Mistress of the pre-Creation "darkness" (the Dark Mother) communing with the Mother of Creation?

Or are those two possibilities, in fact, mystically connected?

However, I think your suggestion:

Is the right one. This is clear and unambiguous, as a credal Statement of Faith should be. That the Daughter is Pure Love and the Mother Pure Light, is simple Filianic doctrine. And as the Scripture plainly says, the Daughter is "the Child of Her Light".

As to the Name of the Daughter, it is usually given as Anna or Inanna. The Apostles Creed insists on the name of Jesus partly to protect against any "heterodox" interpretations. For us, of course, there is only one Daughter regardless of the Name (She is sometimes, for example, called Bala).

This discussion of the Apostles Creed first took place on Heartbook.

The Feast of the Conception

The Deanic Translation of the Hail Mary Prayer

Send Questions or Comments on the Apostles Creed