Cuivanya: The Autumnal Equinox
Divine Life – the Ground of all Being 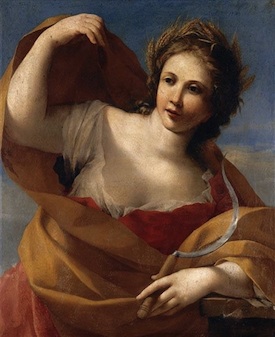 The Autumnal Equinox festival is known as Cuivanya or the Feast of Divine Life.

It is one of the four Cardinal Feasts of the year, and stands at the center of both the Mysteries of Life Cycle and the Mother Half of the year. It falls on the 17th of Abolan the apple-month (21st September) – approximately at the autumnal equinox.

The element governing the Fall season is Earth, and the festival itself is often considered to be the Harvest Festival.

While the association of Our Mother God with the element of earth (the so-called Earth Mother) has its roots in patriarchal "demotion" of the divine feminine to the lesser elements – attempting to make Her earthly and lunar as opposed to Solar and Spiritual – it must be remembered that in the beginning, Our Mother God was rightly understood to rule all elements of creation. Thus the patriarchal error lies not in seeing Dea as Earth Mother, but in seeing her only as Earth Mother and not also as Sky Mother, Solar Mother, and Queen of Heaven.

Again, the idea of a Harvest Festival is often seen by modern people in purely materialistic terms. It is seen as "primitive" people, dependent on agriculture, giving thanks for their material survival and for the harvest that will permit them to eat. They then (so the "evolutionist" narrative imagines) invent "gods" (or for the first many millennia "goddesses") as a sort of imaginary addendum to the physical realities of life.

In fact the reverse is true. Our honored Ancestresses lived far closer to the Spirit than we do. Everything they did was spiritual first and physical second. The transition to agriculture was fundamentally a spiritual phenomenon. It was a part of the increasing materialization of maid: her becoming more and more a creature living on the physical plane.

But this in itself was spiritual: part of the process of cosmic manifestation. The rituals of agriculture were rituals first and practicalities second. They represented a new spiritual orientation for earthly life which remains with us to this day.

The Mysteries of Life Cycle, as we can see from Wheel of the Year diagram, reflects the Eastre Cycle, one centered around the vernal equinox and the other around the autumnal equinox. Just as the Eastre Cycle festivals reflect the life, death and resurrection of God the Daughter, so the Mysteries of Life cycle reflects life, death, and rebirth in both nature and human life, and their fundamental spiritual underpinnings.

The central symbol of Cuivanya, the autumnal equinox Harvest Festival, is the scythe or sickle. This is a symbol that represents both life and death. It symbolizes the harvest and the abundance of the earth, the coming to fruition of all the good things that have been planted and tended, both materially and spiritually. At the same time it represents cutting-down and death. The death of the individual, and ultimately the death of the cosmos itself, when all creation is in-breathed back into Absolute Deity, the Dark Mother who out-breathed the cosmos in the beginning.

Indeed, Cuivanya, the Feast of Divine Life, while it is devoted to the entire Trinity of Mother, Daughter, and Dark Mother may also be called the true Feast of the Dark Mother (and indeed the festival marks the beginning of the dark half of the year).

The Dark Mother, or Absolute Deity (nirguna brahman – God Beyond Form) is called "Dark" because we can know nothing of Her. As the Vedantins put it, we can only assert of Absolute Deity: neti, neti "not this, nor this". Yet while She appears Dark to us, the Dark Mother is hailed as "Dark beyond the Light and Light beyond the Darkness". At Her darkest (from the worldly point of view) she is the "grim" Reaper, reaping not only the human soul at the end of a single life, but the entire creation at the end of all worlds. 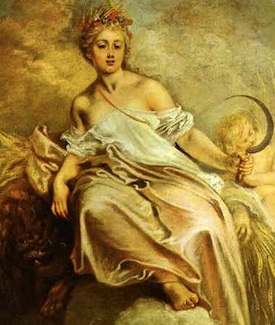 But reaping has a double significance. In one sense it is "death" but in another sense it is harvesting, the coming to fullness and consummation of life. And it is this fullness and richness of Divine Life that is the primary theme of the great festival of the autumnal equinox.

The Dark Mother is likened to "Earth" in its most metaphysical sense, as the Ground of All Being. As it says in the Scriptures: "Let her not trust the ground her feet are set on, and doubt the Ground upon which that ground stands."

The Dark Mother is the Ground from which all being proceeds, and the sickle that harvests it when its cycle is complete. She is "the Beginning and the End". While the first feast of the Mysteries of life cycle, the golden Festival of Regeneration (Chelanya), celebrates renewed life, and the last, the Feast of the Dead (Tamala), celebrates death, the central autumnal equinox festival of Cuivanya celebrates life and death at once in the sacred mystery of the Harvest – the "death" that comes as the culmination and fulfillment of Life. The death to this world that is birth to a higher world.

And yet, of course, it is not death but life that is the primary focus of this autumnal equinox festival, and not simply life in the ordinary sense, but the fundamental connection of all life with the Divine, and as such, it is necessarily also the feast of the Holy Trinity, since the Divine Life that creates the universe is inherently threefold.

The Trinity of Our Mother God (sometimes called the "Triple Goddess") is often compared to the Hindu Trimurti – Creatrix (Mother), Preserver (Daughter), and Destroyer (Dark Mother) of the worlds (or with their lesser reflection, the Three Fates, spinner, weaver, and cutter of the world-thread). But while it is true that the Dark Mother, or Absolute Deity, in-breathes all life and all being at the end of time, it is equally true that She out-breathes it at the dawn of time. She is both the first Sower and the final Reaper of all life and all creation. From Her proceeds the bright Solar Mother who creates the worlds, and from the Solar Mother proceeds the Lunar Daughter who maintains them in being for the whole of their existence.

Nothing exists outside the Divine, and all things are part of the Divine Life. While modern people tend to see much of the universe as "inanimate" or "lifeless", our tradition teaches us that all things are infused with the Divine Life. The universe is ensouled – not in the same way that we are, but everything that is is infused with the Divine Intelligence. That is why, for example, the movements of the stars and planets are connected with the events of human life – not because one directly affects the other, but because both are part of what has traditionally been called the anima mundi, or world-soul, (but which, for the sake of disambiguation, we might prefer to term the cosmic soul).

Divine Life is present throughout the cosmos, not just in human, animal, or vegetative life, but in all creation, and this autumnal equinox festival traditionally expresses that through the agricultural symbolism of the harvest, which is not simply a "metaphor" but a ritual in the fullest and deepest sense of the world, reaching back into the times when all human activities were spiritual rites first and worldly activities only secondarily.

The very biological, chemical, cultural, and psychological factors that make agriculture both possible and necessary are bound up intimately with the living symbolism of the cosmos and our earthly microcosm thereof.

The truth is the exact reverse of the "modernist" or "evolutionist" notion that physical facts come first and metaphysical Truth is secondary. In reality, all things are spiritual first and physical only secondarily and reflectively.

Which is simply another way of saying that Our Mother God is the Ground of All Being, and that every aspect of the cosmic whole is simply an expression of the Divine Life that underlies it.

That is the fundamental Truth of the Cuivanya, the Feast of Divine Life, the great festival of the autumnal equinox. It is a celebration of the Divine that is present in all things and manifested to us in the wonderful golden abundance of the harvest, the yearly culmination of our dear Mother's nurturing love for Her children.

See also the other festivals of the Mysteries of Life season: