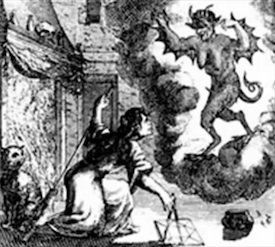 Can demons create? The question arose in a discussion of the vile and cruel images produced by modern horror writers. It was argued that demons, being opposed to the sole Creatrix, cannot reflect Her power of creation.

We believe there is an orthodox answer to this. By orthodox, we mean "according to true metaphysics, which is universal.

We are taught that evil is not a "thing" in itself, because Dea is all in all, and there is no "thing" that is not Her. What demons (and people) can do, because they are very far fallen from Her (that is, demons are and people can be – animals and fairies, we believe, cannot be more fallen than nature as a whole).

In fact evil is simply "distance from Dea" just as cold is "absence of heat" – however harsh and biting cold may feel, it is not actually an entity or even a quality: it is simply the absence of a quality.

Now, coming back to demons and creation. We see the point that some "artistic creations" of the current world are so cruel and vile and profoundly corrupt that they appear demonic. The question of whether demons create seems to be secondary to the question of whether anything this far from Dea can be creative.

And the answer must be "of course not". Evil can never create, it can only corrupt. Nothing new can be made by evil: all evil can do is twist and distort the forms of good things. And all things are naturally good.

So ultimately, every "evil form" is simply a good form distorted and corrupted by fallenness from Dea. Those that seem positively, willfully, evil, are created by deliberate distance from, even hatred of, Dea and goodness: of which there is sadly too much about.

Hatred of goodness and of Dea are, of course, paradoxical, since Goodness is good for every being and Dea is the ultimate Home of all creation – even of the demons. But that paradox is only an extreme form of the paradox of existence itself. If it were not for that paradox, we would all be saints.

But there is a difference between the level of corruption that is present in simple, unsaintly human existence and in the actions and creations of those who give themselves to evil.

This is where we come to angels and demons. Since we have a True Self and a False Self that essentially correspond to the duality of the fallen cosmos itself, our steps toward good may be assisted by angels and our evil actions assisted by demons. I believe this is much more common than people usually suppose. The little angel on the right shoulder and the little devil on the left shoulder, beloved of popular cartoons, while clearly comical and absurd in its graphic depiction, is not so very far from the truth of life.

But can demons create? Take the example of a writer or artist producing images of horror and vileness. Can demons actually make such images and convey them to the writer (granted that by "make" we mean not "create" but "distort and poison originally good things") or do they merely stimulate the writer or artist to new excesses?

That is a question we cannot, perhaps, answer for sure – and one whose answer we are not sure is necessarily all that meaningful, since our vaunted "individuality" and separateness from creation as a whole, and the streams of Light or darkness in which we exist, is somewhat exaggerated in an individualist age.

In truth, no maid is an island.