Chelouranya: Who are the Daughters of Shining Harmony? 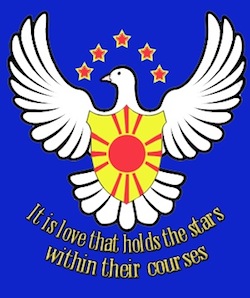 We talk to Shining World about Chelouranya.

Chapel of Our Mother God: Thank you for agreeing to talk to us about Chelouranya.

Shining World: You are very welcome. I am honored that our humble community is of interest to this site.

Your key principles, as laid out on the front page of your main site, are love, innocence, elegance and cuteness. You also have a faith in Our Mother God.

Yes. Those are the key principles of our culture. I would also add Harmony, which is actually the meaning of the name Chelouranya (golden, or shining, harmony). Ours is a harmonious culture of love and amity.

And you are all feminine?

The way Aristasia used to be?

In fact, one blogger has referred to Chelouranya as "the great Aristasian re-branding". Is that accurate or not?

I think that entirely depends what you take Aristasia to have been, and there seem to be a variety of opinions on that matter. We are essentially children of the Motherland of Sai Herthe. Some of us are Herthelani lost from our Motherland. Some are Tellurians who have adopted the Motherland as their true allegiance. That is what defines us.

Now there are people who take Aristasia to have been some kind of Tellurian club. What kind of club, I am not sure they agree among themselves. Some think it was a conservative club, some think it was a radical feminist club, some think it was a "lesbian s/m" sort of club. They all have this one thing in common. They really don't think it had anything much to do with the Motherland. And to us that is what really matters. We aren't lesbians, we are intemorphs. We don't have a standpoint about Telluria and whether it should be conservative, feminist or blue-spotted elephant-ist.

Telluria is this male/female "earth"?

That's right. Our loyalty isn't to Telluria. We aren't any kind of Tellurian club.

And that is what the "real Aristasia" was – an association of Herthelani, not a Tellurian group?

Now that is an interesting question. Clearly "Aristasia" has meant a lot of different things to a lot of different people. We have no intention of getting involved in the "what was the real, old Aristasia?" discussion. It isn't important to us. We are who we are. We are the Daughters of Shining Harmony. Some of the things that have been represented as "Aristasian" are – well, definitely not the kind of thing we would associate with.

We are the Daughters of Shining Harmony.

Now various people on the web criticize you in various ways. What do you say to your critics?

Innocence and femininity are not very popular, so we would expect to be criticized! However, to the best of our knowledge, there is only one real criticism, and that is that we are not good Tellurians (whatever a particular critic takes a good Tellurian to be).

Do you mind if we take a few specific criticisms?

Here is one fairly typical example:

More troubling is the lack of concern for social issues in the real world, in favour of focusing on a fantasy Motherland. It’s intellectually frustrating to bring up a topic about current issues (“What do you feel about gay rights? Abortion? Animal rights? The justice system? The economy?) only to be shot down with “We aren’t concerned with critiquing Tellurian problems.”

Well, as I said. All the criticisms are essentially variants on the same criticism – that we aren't Tellurians. Our critics assume that we are and that the Motherland is a "fantasy". So naturally our points of view are going to be very different.

Suppose one of these people went to a distant island and was asked "do you support the pifflybiffles or the mofflypoffles?" I don't think they would very much care – even if they did live there long enough to know who the piffies and moffies actually were.

Interestingly, I am often amazed by Americans who live in Japan for years – the extent to which they don't become transformed by the culture. Superficially they may pick up this and that but, while there are a few exceptions, for the most part they remain Western to the core. Their reactions, their concerns, their ways of looking at things and thinking about things remain essentially American.

I don't know why I should be so surprised about this because that is exactly how we are. However long we stay in Telluria, we don't turn into Tellurians. Our reactions, our concerns, our ways of looking and thinking about things are essentially Herthelani.

If you don't like that, or don't believe in the Motherland (probably because you are seeing it in absurdly literalistic terms like "outer space") – well, that's fine. We aren't trying to convert you. But you are never going to understand how we think or why we are what we are, and you will be continually exasperated by the fact that we really aren't good Tellurians when you think we should be.

That doesn't bother us, but it could be bad for your blood pressure.

Really, why in the worlds would we be concerned about their economy? How concerned are they about the Novaryan economy?

I think the common answer is "Well, you have to live here".

Actually, that probably just reflects the naivety of people who have lived in one Tellurian country most of their life. I have lived in many Tellurian countries and met various expats, and one thing I notice is that expats are very rarely all that engaged with the "issues" of another country, however long they live there.

The "real issues" to them are always those of their own country (especially if they are Americans). It is quite true that the "issues" of the country they are in do materially affect them – but in fact "concern with issues" has very little to do with actual material effect on the individual and much more to do with ideology. Ideologically they do not become involved with another country, or if they do, it is usually through the spectacles of their own country's way of looking at things.

It is just the same with us. The "issues" of Telluria are not our issues. We don't belong to Telluria.

The Japanese example is an interesting one, and leads on to another frequent criticism. I'll take it from the same article as it is pretty typical:

[Chelouranya] is obsessed with all things Japanese and “kawaii”. One member recently commented in the Shining Tea Room Forum that “Japanese culture is probably the closest culture we will find to the Motherland.” This idealization of Japan smacks of Japanophile attitudes, a belief that is completely divorced from the reality of the country.

As I said – there is really only one misunderstanding behind all these criticisms. If we were Tellurians, such a remark might make some sense. There would at least be some point in discussing it. But we aren't. We aren't Japanophiles or "philes" of any other Tellurian country. We are Chelouranyi.

I don't know if that is exactly what someone said in the Shining Tea Room, but if it is, doesn't it reinforce my point completely? The "virtue" of Japan is not that it is Japan, but its degree of closeness (in certain cultural aspects – certainly not all) to the Motherland.

So why should "the reality of the country" be of any overriding interest to us? We aren't here to decide which Tellurian countries have a nice "reality" – assuming any do. We are here to find things that help us, as children of Sai Herthe, to make a cultural environment we can live in. If aspects of Japanese culture help in that, we use them. If aspects of West Tellurian "Art Deco" culture help in that, we use them. None of that changes our real and only allegiance, which is to the Motherland.

So, what would you say to people who say "They base their lives around a fantasy country"?

I would say: "We might dispute the word 'fantasy', but at least you've gotten the point. Now that you've got it, keep it in mind and stop being amazed that we don't think or act like Tellurians."

So now (forgive me for playing Devil's Advocate as it were) how would you answer people who say. "I understand all that. So why would I want to join a group of self-acknowledged aliens?"

I guess I would say "I don't know. Why would you? Before we let you in, we'd quite like to know what your reasons are."

You see we aren't trying to win "converts". We are essentially in being as a group for two reasons: 1) to create a home for our own Lost Herthelani who are stranded in Telluria; 2) to give a Sanctuary to others (Tellurian or not) who are truly looking for the things we are – an all-feminine world based on harmony, love, innocence and elegance (and yes, with a considerable penchant for cuteness, though that isn't compulsory!) To the second group we offer a warm welcome. But do recall that we are Herthelani. That is what makes our group what it is. We are not about to turn into Tellurians or start having "opinions" on Tellurian issues or any of that sort of thing.

If you want to give your allegiance to the Motherland, we welcome you. If you just want to nestle with us for a while, we also welcome you, so long as you behave in a Chelouranyan manner while you are with us. But don't forget that we are who we are. We are not Tellurians.

A final word to people who say you are living a fantasy?

A great Tellurian writer put it better than I ever could, so I will, with your indulgence, quote this:

One word, Ma'am. One word. All you've been saying is quite right, I shouldn't wonder. I am one who always liked to know the worst and then put the best face I can on it. So I won't deny any of what you said. But there's one thing more to be said, even so.

Suppose we HAVE only dreamed, or made up, all those things--trees and grass and sun and moon and stars and even Aslan. Suppose we have. Then all I can say is that, in that case, the made-up things seem a good deal more important than the real ones.

Suppose this black pit of a kingdom of yours IS the only world. Well, it strikes me as a pretty poor one. And that's a funny thing, when you come to think of it. We're just babies making up a game, if you're right.

So, thanking you kindly for our supper, we're leaving your court at once and setting out in the dark to spend our lives looking for the Overland. Not that our lives will be very long, I should think; but that's a small loss if the world's as dull a place as you say."

If the Tellurian "real worlders" were right – and I don't believe they are – but even if they were – we would live as much like Herthelani as we could, even if there was no Motherland. We would be on the side of Sai Rayanna and her daughters, even if there were no Empress to lead it.

We are the Daughters of Shining Harmony.

Would you like to put extra questions about Chelouranya?  Use this form.