Christianity and Science
The Western Worldview 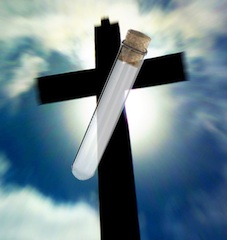 Christianity and Science are often considered to be opposed.

When we say "science" here, we are of course perpetuating an absurdity. There is really no one thing called "science". There is a collection of findings and speculations in different spheres, united only by a similarity of method.

It would be more accurate to speak here of the so-called "scientific world view", which is a collection of popular prejudices based very loosely on a superficial mass-understanding of the findings and speculations of material science.

Having said that, are Christianity and "science" in fact opposed? Or are they actually two closely-related aspects of the modern Western view of the world?

A discussion on this subject may be of interest to our readers.

Discussion on Christianity and "Science"

The discussion began with mention of Mount Fuji and the fact that it is regarded by the Japanese as the Sacred Mountain:

It was hailed as the superior mountain of the three realms (Japan, India and China: i.e., the whole civilized world), which is the normal position of taking the local representative of the World Axis as the World Axis itself (but not in the exclusivist and literalist way of the Abrahamist traditions).

This prompted the following reply:

How very true. The idea of suggesting that people are in serious error for taking the “wrong” Sacred Mountain as the true one is fairly obviously absurd I would have thought.

But is it any less absurd than saying that people are in serious error for taking the “wrong” kami [Japanese for devi or deity] as the outward Form of the Absolute?

The answer to this was as follows:

This kami question gives rise to a whole set of thoughts:

As we know, the Classical Decadence started in seventh‐century (BC) Athens and was an immersion in material things for their own sake.

This was developed in both philosophy and art. The new “realistic” art attempted to make what Plato called copies of copies. The aim was to draw a physical tree rather than to draw the Archetypal Tree (from which every physical tree derives its Form) as all traditional art styles do.

At the same time the Abrahamic religion was promoting kami‐exclusivism (to coin a phrase).

It is natural to take a particular kami as the outward form of the Absolute. In India currently, it is usually Visnu (under forms such as Sri Krishna), Siva, or Mahadevi (the Great Mother). The idea of taking someone by the throat for calling the “wrong” kami supreme barely exists.

The “jealous god” was at first simply an expression of tribal nationalism, but it became literalized in the notion that the Absolute was Its outward form, and that outward form was one particular kami.

I think we see two different forms of literalism here, that are related only by their common factor: a kind of erroneous “factuality” – a belief in the outward form at the expense of the inner essence.

That the two eventually married and gave birth to what eventually became the modern Western world view is rather fascinating.

Just a brief note, but perhaps worth pursuing at some point.

This prompted another reply:

The marriage of the Classical Decadence with Abrahamic exclusivism is a really interesting topic.

It seems to me that the marriage was rather a curious one with first one party dominating and then another.

In the Middle Ages the Abrahamic stream decisively won, and the humanism/proto‐materialism of the Classical stream lost a lot of ground. Western art even returned from naturalism to attempting to depict the Archetype.

At the Renaissance (the term quite consciously meaning rebirth of classicism), the classical stream rallied and really has never looked back. It began to turn on the once‐dominant partner.

The couple may have begun to think about divorce, but by now this was impossible. They had become a symbiosis.

The “scientific world view” is posited around the “jealous god” exclusivist mentality. While, by its own philosophy, it restricts itself to the material plane and is disqualified from commenting on anything else, in practice it dismisses all other forms of knowledge as “superstition” (false gods) or pseudo‐science (heresies of the True Faith).

Similarly, Christianity when defending itself against “historicist” attacks, rather than asserting the superiority of myth to history, attempts to defend itself on its antagonist’s own terms as “historically true” (conservative), or else retreats into vague ahistorical assertions that essentially affirm the “scientistic world‐view” and try to carve out some relevance (liberal).

Like any dysfunctional couple, Christianity and “Science” fight, snarl, unite against common enemies (every other world‐view), then fight again. But they cannot separate. They are each other.

The Traditional World View vs the Modern World View