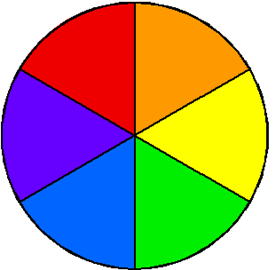 Color is fundamental to human perception: therefore a knowledge of color meaning is one of the primary elements necessary to understanding the symbolic dimension of the created world.

We are accustomed to speak of the seven colors of the rainbow. This is in line with the many other "sacred sevens", all of which have their fount and origin in the seven fundamental Powers of being.

However, upon immediate examination, it seems apparent that we should really speak of six colors, as demonstrated by the color wheel shown here:

This sequence is made up of the three primary colors plus the three secondary colors. After purple, the circle naturally returns to red.

The seven-color rainbow is made up by adding to the three primary and three secondary colors a single tertiary color: indigo. 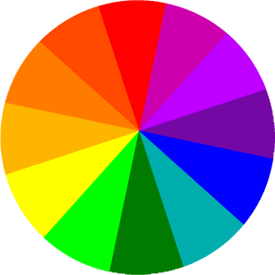 Logically, however, if tertiary colors are to be introduced at all, the sequence should be one of twelve colors including all primary, secondary and tertiary colors.

Is the traditional notion of seven colors, then, in error?

Certainly not. One fundamental division of seven is 6+1 as exemplified in the six directions of physical space (the four compass-points plus up and down) plus the seventh, transcendent or non-spatial "direction" which gives rise to all space and which is the passage beyond the world of space.

In terms of color meaning or symbolism, the six directions are represented by the six natural colors while the seventh "color" is the pure white light from which the colors are differentiated.

The "seventh color" may also be seen as black, or the darkness from which all color proceeds. And this is not a contradiction with our previous statement, for if we see the six colors arrayed as a six-spoked wheel (which is precisely the Wheel of Werde or the samsaric world of time-space), then we see the three dimensional world in a two-dimensional figure, while the axle, or axis, that passes through the centre of the wheel exists in a dimension outside material space.

Nonetheless, all seven Principles influence the manifest world and it is necessary for each to be represented: hence a certain ambiguity in the traditional six/seven color schema.

Let us, then, comment briefly on each color meaning:

Yellow is the nearest color to pure white light. Its color meaning is representative of Sai Raya the Sun. It is the non-metallic representation of gold, and thus the symbol of the Spirit Herself. Where the three gunas are represented by the primary colors (rather than white, red and black) yellow is sattwa.

Orange mixes the pure light (pure insofar as a this-worldly reflection can be pure) of yellow with the fiery tendency of red. It represents Sai Mati, the Divine Intelligence. In some symbolic systems orange becomes the symbol of Sai Raya (who combines heat and light – red and yellow) and yellow of Sai Mati. This corresponds to the patriarchal perspective which makes Woden the king of the gods or to Buddhism, which makes the avatar of budhi, the Divine intelligence (from the same root as Woden, with b for w/v) its primary principle, dressing its acolytes in saffron robes.

Red is the color of fire. It denotes the extreme of activity and thus is at the furthest remove from the non-action of heaven, expressed in the dictum "Earth moves but Heaven is still". Where sattwa and tamas are symbolized by white and black respectively, red may signify rajas, for red is, in a sense, the epitome of color, being of all colors the most vivid – that which produces the maximum of vibrations in the eye. Since conflict is the nature of the material world of continual flux and change, it is natural that red should be the color of Sai Vikhë

Violet combines the hotness of red with the coldness of blue. Its color meaning connects it with that world of duality which is the lunar and psychic domain – moon standing between sun and earth, soul between spirit and body. It is the color of the Great Mediatrix, Sai Candré

Green is the color of generation. It is the color of Sai Sushuri and, as we have explained in Venus, Goddess of Love, there is a deep connexion between the generation of all things and the primordial Love-Principle.

With green we naturally return to yellow on the color wheel. The color that is "left out" is the tertiary color indigo: the color of Sai Rhavë. This is in keeping with the mysterious and extra-worldly character of that Janya, whose colors are also brown, black, dark gray and all relatively "colorless" colors.

This is a brief summary of the fundamental principles of color meaning. Much more might be said on each of the colors as well as on many intermediate shades.

However, the present survey should be sufficient to indicate the metaphysical character of color and the nature of color meaning.

Or return to Metaphysics main page

Send Questions or Comments on Color Meaning and Symbolism