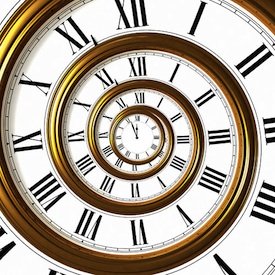 An enquirer asks about cyclical time:

The article on the Wheel of Life speaks of the “turning world” and associates this with the helix or spiral.

I know the great Scriptural locus for the turning world (and therefore cyclical time) is “Earth moves but Heaven is still: the rim revolves but the Center remains without motion”, which is clearly based on the symbolism of the wheel – which rotates. So the question is: does the “turning world” rotate, or is it a spiral or helix? And if it is a spiral, why is it? The answer to the question as to whether the “turning” of the world is a rotation or a spiral is: “both”. The simple turning of the wheel, as cited in the Scriptural passage you mention and many other places represents simply the “mobility” or flux of the manifest world as opposed to the stillness and all-completeness of the Absolute. Clearly this is reflected in the Wheel of the Year and all other natural cycles.

However, in regarding the movement as purely rotational, implying a purely cyclical time, we are to some extent still viewing the cosmos “metacosmically”. We are still speaking of the year rather than any particular year (that is any given iteration of the Sacred Year in time).

Now, as we know, time is fundamentally cyclical, and in the great Cycle of Time, from the outbreathing of space/time from the Dark Mother at the beginning to its inbreathing at the end, are innumerable sub-cycles. The greatest cycle with which we traditionally have dealings is the manvantara or a complete cycle of a particular maidenkind, from its Golden Age to its Age of Iron (its four “seasons”).

Even the major sub-cycles within such a cycle are of great duration and the passage from one to another such a complete “death and renewal” that they are referred to in the various Flood stories found in all cultures (the discussions among Tellurians about whether there was or was not really a Flood – meaning a literal deluge of physical water – is merely evidence of the childish simplicity of the modern Tellurian outlook, even though we have no doubt that there were literal Deluges at various points, associated with major transitions).

Now the point here is that since we know that from the pinnacle of the Plenary Golden Age to the nadir of the Plenary Iron Age there is a process of constant movement away from the Center and a constantly increasing “solidification” of materiality, it follows that when a lesser (i.e. sub-manvantaric) Iron Age ends and a new lesser Golden Age begins, it will begin at a lower level than the last Golden Age – or, to put the same thing another way, at a level further out from the Center.

Thus the cycles to a certain extent “repeat” – so we have a broadly cyclical time – but not identically. Each cycle takes place at a “lower” or more outward level than the one before it. In other words, the exact designation of this cyclical movement is that of a spiral, not a rotation. We might say that the cyclicity of the “turning world” is “in principle” a rotation, or a "cyclical time", but “in practice” – that is, in its actual cosmic deployment in time – a spiral.

At a much more microcosmic level, the same thing may be said about cycles of civilization. We know that, within the Iron Age, many spiritual revelations have been made, upon which civilizations have been based (for every civilization is the out-working of a particular spiritual “seed”). We know that as the intellect of maid diminishes, there comes a point at which the last revelation is too much for her (we might say, to paraphrase Scripture on a very microcosmic, but still apposite, level, “she can no longer look upon its brightness").

At this point the tradition must either be re-adapted and “economized” to be assimilable to maid at her current level or a new revelation must occur that is closer to the level of her current possibilities (Miss Trent, in The Feminine Universe, gives examples of this happening in various civilizations during the great transition of the 6th century BC). Again what is taking place is not a series of equal cycles, or a precisely cyclical time, but a downward spiral.

Naturally some New Age people have attempted to interpret this symbolism in line with the “progressism” of modern West Telluria and to see the spiral as a symbol of “evolution”. And in fact – so long as one does not confuse “evolution” with “progress” in the modern sense of the word (which, unfortunately, they mostly do) this is correct. What is actually taking place is the increasing “horizontal” development of material possibilities at the expense of the proportionately decreasing “vertical” development of spiritual, and even subtle, possibilities.

Evolution in the true sense is precisely what is meant by the fact that the spiral moves outward – literally e-volving (un-rolling). In this sense the choice of the word “evolution” is actually uncannily accurate (using the word “uncanny” in the common modern sense – for the magic of words, which affects even those – such as the people who coined the term “evolution", who clearly had very little idea what they were really saying – is actually “canny” [cf. the related words gnosis, jnana] in the very deepest sense).

Where the mistake lies is in seeing this spiral “evolution” as, in any sense except the purely material, a “progress” and, most ludicrously of all, an “intellectual” progress, of which it is quite literally the precise reverse.

Does this mean that each year is not a rotary cycle but a downward (or outward) spiral from the year before?

Very technically, yes. Each year is a very slight spiral downward/outward from the year before it, but it is so slight that for all practical purposes it can and should be ignored – other “winds of werde” will have far more influence on the quality of each year than the tiny spiral increment. To all intents and purposes we both can and should ignore the tiny spiral decrement of the year and regard it as pure cycle – a microcosm of cyclical time as a whole.

Why “should”? Because the fundamental and Providential way of looking at the year is via the sacred narrative of the Wheel of the Year. To fail to do that and to see the year as a spiral rather than a "rotary" manifestation of cyclical time on the grounds of the tiny technical spiral increment would to be using metaphysics in the foolishly literalistic way that modern rationalism uses material science – allowing knowledge to become the enemy of wisdom.

Actually, the decline of a manvantara is very slow. People sometimes say “You are quite right about the decline of the Iron Age: why over the last 10 years, I have seen the decline in culture”. Now the truth is that the Age itself does not move that quickly, although the centrifugal force that drives it is indeed the same force that made the culture decline over the last ten/twenty years, or whatever period the speaker is envisaging.

To give a very makeshift analogy: we all know that glass is actually a liquid, just a very slow-flowing one, and that over a very long time, the drinking glass standing on the table will become a puddle. Now let us imagine a universe made of glass standing on a table. Very slowly it will “melt” (even physical science, from its very limited point of view, has realized this, and calls it entropy). Now suppose someone drops one glass sphere. The analogy here is that a particular civilization loses the “support” of its spiritual harmony (thamë) and falls into decay – something that has been a possibility in the west since the “classical revolution” of the 6th century BC, but has only been truly effectively taking place over the last half-millennium.

As we see, the ball falls very quickly, and we all know that the momentum of a falling object accelerates very rapidly as it continues to fall. Now, the gravitational force that is pulling each glass object slowly into a puddle and the force that is pulling the dropped sphere downward is the same force, of course. But the ball has been cut loose from the “love that holds the stars within their courses and all the worlds of the immeasurable cosmos within the harmony of the celestial music” and so is falling at a very different rate from the very gradual “melting” of the natural universe or of a natural civilization (i.e. one still sustained by its ordained thamë).

So can we say that the concept of spiral time actually reconciles traditional cyclical time with modern linear time – in that time does move in cycles but is actually "going somewhere"?

Up to a point it possibly does. And indeed, traditional cyclical time thinking and modern linear time thinking are, in some sense, agreed on where time is "going". It is "evolving" or moving outward. The very word "e-volve" means "to move in an outward spiral". However, in the first place, since modern thought is centered on the material domain and traditional thought on spiritual principle, their respective valuations of this movement are precisely opposite. The culture of modern linear time (and it is essentially a cultural and ideological phenomenon) envisages a "progress", while the traditional e-volutionism of spiral time envisages a continual increase in all that is "outward" and material with a corresponding decline in all that is really most important.

Also we must bear in mind that the spiral nature of time is not its fundamental nature. Cyclical time is the name given to the traditional view of time precisely because time is fundamentally cyclical. Within a given cycle, there is a spiral, outward, or materializing movement, but from the out-breathing of the cosmos to its in-breathing is a perfect cycle, and when a new cosmos is out-breathed there is no progress, degeneration, or evolution whatever from the previous total-cycle. So cyclical time is the correct designation for time overall, and the apparent cyclical time seen in each year, or in any other temporal cycle, is a reflection of the fundamental nature of cyclical time as a whole.

The Wheel of Life

The Wheel of the Year

Send Questions or Comments on cyclical time vs spiral time