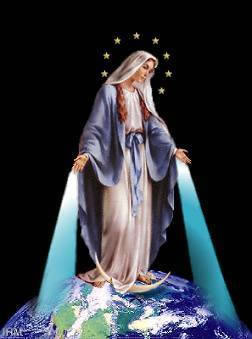 Following reports in The Chapel Chronicle about Philomarianite and Deanic/Catholic groups who worship Our Lady Mary as the Supreme Deity, honoured Miss Georgia Cobb wrote:

I too am pleased when I read articles by people who honor the Feminine Divine as Creatrix of the Universe and use primarily solar and celestial imagery rather than lunar and terrestrial imagery in speaking about Her.

However, I would be cautious about encouraging those who promote the worship of Mary (of Christian and Muslim writings) as Goddess. The Mary that Christians and Muslims honor is not God. That Mary is honored for who Christians or Muslims think Mary's son Jesus was or is (i.e. God the Son or a prophet, respectively), not for being divine in her own right.

To worship Mary as Goddess or Dea or Queen of Heaven (i.e. Sole Ruler of Heaven) would not be honoring to Mary, the earth-born female handmaiden of God that she is. Nor would it be honoring to Dea, the Celestial Sovereign Feminine God She is.

Devotional use of rededicated, so called, "Marian" iconography that incorporates attributes of God the Mother or God the Daughter (and may well have been patterned after earlier Goddess iconography) is one thing. Promoting the worship of Mary is another matter altogether.

Furthermore, one should not confuse the look alike or sound alike names of Mari (an ancient name for God the Mother) and Mary or Mari or other derivatives (from the Hebrew Myriam). They are not the same name, do not come from the same language, do not mean the same thing and are not referring to the same person. One is the name of God the Mother, the other is not.

May Dea guide you into all truth,

This question is a long-standing one. From the strict-Filianist perspective, what you say is correct, and some do remain wholly and healthily within this perspective.

At the same time we should perhaps understand that within the vicissitudes of patriarchal Telluria, the true worship of Dea has stayed alive in many and various ways: many of which were iconographic rather than doctrinal to any degree of sophistication. Worshippers (such as some Philomarianites) knew Mary was the Supreme Being without having much more thealogical structure than that. And what they had is, after all, the One Thing Needful.

That the Name of Mary is "accidental" we cannot accept. There are no accidents on this plane. That that most powerful of all Names was given to the West, in despite of the patriarchal theojunta, is certainly no accident.

To us, Our Lady Mary has no connexion at all with a first-century TCE Jewish woman. But if the supposed connexion in certain patriarchal faiths helped Her Image to survive in the Tellurian West, then we simply give praise to the many and mysterious ways in which She makes herself ever-present to Her children.

There is one eternal Mary, before Christianity, before Abraham, before even the first rudimentary half-patriarchal junta dared to set up a half-god in the face of the Eternal Mother. She was with us then, now and always.

May Her name be forever praised.

Maria-sama no Kokoro: A beautiful online video of a hymn to the Immaculate Heart of Mary with Déanic interpretation

The Mother-God Hail Mary MP3: The Hail Mary, as "translated" for devotional use by children of Our Mother God, presented and explained in a sermon given at a Filianic Service

Rosary Meditations: Meditations for the five decades of the Rosary for devotees of Our Mother God (MP3)

Or go to the Our Lady Mary homepage

Send Questions or Comments on The Divine and Eternal Mary