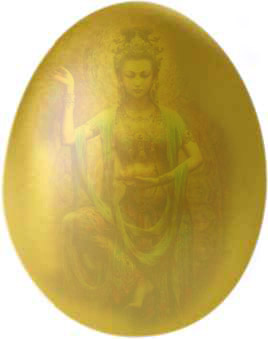 Early accounts tell of the creation of the world from a great Egg. What has this to do with Easter? We discover the origin of the humble and seemingly frivolous Easter egg in one of the profoundest traditions of the Mother Religion of humanity.

Ancient cultures as diverse as the Chinese, the Egyptians and the Romans decorated eggs at spring time. The Chinese custom of giving painted eggs during spring festivals is known to date back 3000 years and undoubtedly is far older.

The word Easter has been adopted by the Christian religion for the feast of the death and resurrection of a male savior. But what does this word really mean?

Easter is not actually a Christian word at all. It comes from Eostre, the Teutonic name for the Goddess of Spring and Dawn. It is closely related to Greek Eos and Sanskrit Ushas, also names of the Goddess of spring and dawn, as well as Babylonian goddess Ishtar (Inanna). Interestingly, even in Japanese, the word for morning is Asa.

In many early accounts of the Creation, the world comes from a great Egg created by Our Mother God in the form of a bird. This is where we truly find our Easter egg origin.

Even in The Gospel of Our Mother God, whose Creation account does not explicitly mention the egg, it is implicit:

Not only is She likened to a bird, specifically a dove, but Her contemplation is referred to as "brooding": the term used of a bird preparing to lay or hatch an egg.

Interestingly, while this brooding takes place "upon the waters of the first darkness" – the "place" of pre-Creation – it is not the first Creation that is referred to here, but the birth of God the Daughter, which is often seen as a "secondary Creation": that which makes a fallen and material world possible.

This corresponds to the traditional nature of the World Egg, described by the metaphysician René Guénon: 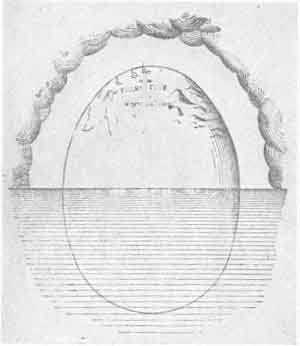 . . . the "World Egg" does not represent the Cosmos in its fully manifested state, but in the one immediately preceding its unfolding; and if this unfolding is visualized as an expansion outwards in all directions from its starting point, the latter will of necessity coincide with the center itself. It follows that the "World Egg" is "central" in relation to the "Cosmos" . . . It may be added that the essential difference between the [sphere and the ovoid] is that the sphere, extending uniformly in all directions from the center, is truly the primordial shape, whereas the ovoid corresponds to an already differentiated state deriving from the former by a sort of 'polarization' or doubling of the center.

Guénon: "The Heart and the World Egg"

for She had conceived a Daughter that was not separate from Her, but one with Her, and the Child of Her Light.

This mystical separation/non-separation within God Herself makes possible the existence of the final "level" of creation: the material world – a world that is necessarily comprised of duality and oppositions.

In the Filianic Devotional Service we find the invocation:

Great Dove of the Waters Who has brought forth the world from the matrix of Your being.

Dove of the Sacrifice, that were crushed beneath the heel of death that You might come as our Savior.

Thus quite explicitly the name of Dove is applied to both Mother and Daughter, Creatrix and Savior, the dual-heart of the World Egg.

The dual nature of the World Egg is underscored in some myths by the fact that the two halves of the egg became Heaven and Earth – which are the fundamental archetype of all later dualities (Yang being the Nature of Heaven and Yin the Nature of Earth). In Filianic religion, the Mother and Daughter represent the necessary duality of manifest being, while the Dark Mother represents that Aspect of Deity that is utterly transcendent to all manifestation and therefore completely unknowable.

In Filianic Religion, Eastre is the first day of spring, and the first day of the year, the day when the Daughter returns from the nether world, releasing the souls bound there and bringing the world back to life.

The egg is the natural and perfect symbol of this Event and is remembered in the custom of the Easter egg, long after the Easter egg origin has been forgotten.

The Heart and the Moon-Axe: The dual-nature of the World Egg, expounded in this Easter egg origin article, is mirrored in that of the Heart