An Easter Hymn
for Devotees of Our Mother God 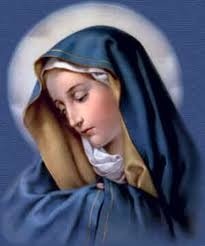 This is an old Easter Hymn taken from Filianist papers many decades old. It may go back much further.

This beautiful poem epitomizes the "wasteland" nature of the period between the death of God the Daughter and the dawning of the New Year: a period known as the Hiatus, which in the Filianic calendar has no date and does not "exist" as part of the year.

The Wasteland is a fundamental part of the Sacrificial Mythos that has been lost to the West for centuries. It is one of the fundamental differences between the historicized Christian version of the Divine Sacrifice and the older, more fully mythological, or cosmological versions, including, of course, the original feminine form.

Our Lady has put on Her veil
To tread a darksome path.
Her fair form waxeth cold and pale
Beneath the Dark Queen's wrath.

She entered in that region drear:
"Who comes?" the demons cry.
She answered, "Thou hast naught to fear
For it is none but I".

"Your precious love, Your radiant light,
Fill us with hellish dread,
We dare not stand within their sight."
"I give them up," She said.

Our Mistress, She has gone away
Into the land of pain.
Her laughter, like the sun's bright ray,
When shall it ring again?

She was our Sun in times before,
The light of our small sky;
And now the birds will sing no more,
The rivers all run dry.

And all that's fair on earth or sea
Is withered out of form.
Without our Mistress, what are we
But leaves upon the storm?

And all that's sweet, where'er we go,
Is turned to bitter gall
For want of She that loved us so;
She died to save us all.

I don't know how, but I had almost forgotten the existence of this beautiful hymn, until, on Kala I was discussing with a friend the differences between the Filianic and Christian understandings of the Divine Sacrifice.

It is often said that the Filianic Eastre is similar to the Christian Easter – the very name of them both goes back to Ishtar/Oestre, the Sacrificial Goddess of myths from Babylon to the Teutonic west. Naturally the Divine Sacrifice is a fundamental truth and all versions of it are going to have fundamental things in common.

But discussing this with someone deeply familiar with the Christian rituals, it is also interesting how very different they are. It was the discussion of this that made me recall this hymn.

One of the things my friend was talking about was the fact that the death of the Christ is very harsh, and the sense of guilt is a very important factor. All the disciples let the Christ down and in the celebration of the Last Supper and the period afterwards, Christian devotees share in that universal guilt.

Guilt of this kind is not a part of the Kala/Hiatus experience at all for Devotees of Our Mother God. But how do we feel?

The answer is that we feel (if we are fully participating in the ritual of the year) desolate. It was this that recalled to my mind the lovely verse:

And all that's fair on earth or sea
Is withered out of form.
Without our Mistress, what are we
But leaves upon the storm?

The fundamental nature of the Filianic devotee at this time is one of dependency. While the Christ's disciples are viewed as independent individuals who are found wanting in the time of crisis, we Filyani are children of our Mother and, like the whole of creation, utterly dependent on the Daughter, Who is the sole Sustainer of all being.

The death of the Daughter is not a historical event but a cosmic event. With the separation of the universe from the Mother-Creatrix, it cannot exist but for the Daughter-Sustainer. When She is gone, being itself has lost its fundamental support. The world (all worlds) become a wasteland.

The wasteland mythos was largely lost in the West because it has no real place in the Christian story, and yet it is one of the fundamental truths of cosmic existence. Interestingly, it came back to the West in the 20th century, first through T.S. Eliot's poem "The Waste Land" and then through Professor Tolkien's Lord of the Rings and its many imitators. In Japanese role-playing games the spread of a blighting evil over the land is the classic theme – very often associated with the loss of a Princess.

My friend said that while the equivalent of Kala (the Death) was harsher in Christianity, the period between the death and resurrection was much harsher in the Filianic faith. This, I think is true, because we are taking part in the darkest part of the Cosmic Drama, entering into the very depths of the Wasteland, as far as it is possible, in our limited human way, to do so. It is a very profound, and quite disturbing, experience.

The absence of guilt (at least fundamentally – we may indeed be highly conscious of our imperfections) from this disturbing experience is, I believe, something that lies close to the heart of the difference between the two traditions. The Christian perspective tends to be individual, moral and historical. This was the case from the beginning but has been intensifying in all three aspects since the Protestant Reformation (and Catholic Counter-Reformation).

On the other hand, the Filianic/Herthelan perspective tends to be communal, thamelic and metaphysical. These terms may need a little more explanation since the perspective is not very familiar to the modern West, which is shaped by, and has shaped, Christianity.

By communal (rather than individual) I mean that we tend to see ourselves as a group rather than as isolated individuals. In mythic terms, in the Hiatus period, we see ourselves not so much as sinning individuals, but as "earth's children" (meaning beings in material manifestation) suffering "like leaves upon the wind" – because we are essentially the children of Dea, wholly dependent upon Her. Clearly this is something very alien to the modern West, which has increasingly stressed independence and individuality, even in its religion.

By thamelic (rather than moral) I mean not that we have no morality. We certainly do have morality. But we do not see human life as essentially moral in the way that Christianity, and the Western world in general, does. Rather what is most important to us is being in thamë – in tune with the harmony of the universe; doing what is ritually correct and in tune with the Golden Order. Morality will flow naturally from this, but it is not essentially a moral question – and not essentially an individual question, even though each individual is, of course, responsible for the maintenance of thamë.

By metaphysical (rather than historical) I mean that we see not only mythic events, but all things, as being fundamentally beyond physical existence. The things and events of the physical world are merely shadows of the Real things. Thus both history and physical science are relatively less important to us. We acknowledge them, of course, but their place in the hierarchy of knowledge must necessarily stand firmly below the things of which they are merely shadows. In terms of the Hiatus period, this means that we are not commemorating a historical event, but actually living through (in shadow form, but no less actually for that) the darkest of all metacosmic events.

These fundamental differences in the way we experience everything are the keys to why the Hiatus period for Filyani is so different from its Western patriarchal equivalents.

I think this lovely Easter Hymn truly epitomizes that difference and allows one to enter into the very heart of Filianic spirituality.

A Chant for the Hiatus

Send Questions or comments on An Easter Hymn