The Feast of the Epiphany 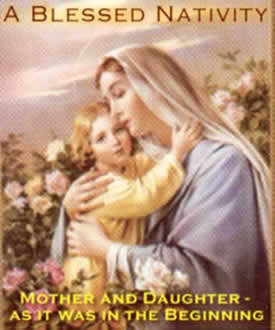 The Feast of the Epiphany – known by that specific name – long predates Christianity. It belonged to the Central Cultus of the Classical and pre-classical world: the Eleusinian Mysteries

This most sacred of Feasts represented the Shining-forth of Kore ("the Maiden") or Persephone, the Daughter of God the Mother, Demeter (De/Dea = God, Meter/Mater = Mother).

The fourth-century Christian father, Epiphanius, has this to say about the Feast of the Epiphany in his Panarium:

In many places they celebrated a very great festival on the night of Epiphany [5th/6th of January], particularly in the so-called Koreion at Alexandria. There is an immense temple there, the temenos of Kore... [with celebrants] watching all night, singing and playing the flute in honour of the sacred image of Kore – the Maiden.

The Showing-forth of the Daughter was a central part of the cultus of Demeter and Persephone (Kore – meaning simply "the Maiden" or "the Daughter" – being the popular name for Persephone, just as our Scriptures use the phrase "our Lady, the Maid" for the Daughter) – although in later years, patriarchal "amendments" began to be made.

The birth takes place in the Cave of the World. The Janya (Angel) specifically says: "Approach no further, for if you cannot look upon me, how shall you look upon my Lady, whose handmaiden I am?"

The daughters of earth see the star and its wonderful luminance; they see all the Shining Janyati of Heaven, but they do not see the Daughter.

The Feast of the Epiphany is where the Showing-forth takes place. Maid, owing to her turning from Dea, cannot look upon the brightness of the Solar Mother: but the birth of the Daughter is the resolution of that separation. Her Lunar Light reflects the Supernal Brightness of Our Mother God in a gentle form that earth's daughters may look upon.

The Feast of the Epiphany is the first darshan of the Daughter: the first time maids are granted the Saving Vision of their Redeemer.

This same Divine Reality is narrated in the Devi Gita (the "Song of Dea"), though without specifically representing the Mother- and Daughter-Principles as separate Beings (as we have said elsewhere, this is simply a matter of perspective:

"Whose Brightness is too great for us to look upon"

1.28. Flashing like ten million streaks of lightning tinged with red, that supreme lustrous power Shone forth unencompassed above, across, and in the middle.

1.30. The dazzling brilliance blinded the eyes of the devas.

Even heavenly beings are blinded by the brilliance of the Supreme Solar Mother.

Note that Her "soothing", Lunar quality is already present and active, but it has yet to be made manifest. In Filianic Thealogy, this would be equivalent to the period between the Nativity and the Epiphany.

And so She manifests herself in a Form seeable by lesser beings (and, notice, a young – maiden, not Mother – Form).

When again their vision returned, the devas beheld

1.31. That light appearing now in the form of a woman, charming and delightful.
She was exceedingly beautiful of limb, a maiden in the freshness of youth.

1.32. Her full, upraised breasts put to shame the swelling buds of the lotus.
Her girdle and anklets jingled with clusters of tinkling bells.

1.33. She was adorned with a necklace, armlets, and bracelets of gold,
Her throat resplendent with a chain of priceless gems.

This narrative represents Dea as One, although there are certainly Indian narratives within the same Tradition that show Her as the Trinity (see for example our page on Sri Lalita).

Nonetheless the Principle is the same. The Supreme Solar Mother is "too bright for us to look upon" and She, through Her supernal Mercy and unbounded love for Her children, has manifested Herself in a beautiful Form in which She is not Herself – and yet She is Herself. This is the Central Mystery of the Feast of the Epiphany, as it was once the Central Mystery of the entire Western pre-Classical world.

It is the Central mystery in the heart of every Filianist.

The Feast of the Epiphany may sometimes be called "little Nativity", but spiritually there is nothing "little" about it. It is the day in which, for the first time since her turning-away, maid approached Our Lady and opened her eyes to see Her Gracious Presence.

The Promise of Scripture is here fulfilled:

Rejoice poor wanderers of the earth and exiles from the house of your Mother; for to you shall come a Guide and a Deliverer.

The Meaning of Nativity. The Birth of God the Daughter is the central Event of the Filianic Midwinter High Festival. Read about it here.

Winter Solstice Celebrations: As winter draws nigh, we examine the true nature of winter solstice celebrations and what they mean to a devotee of Our Mother God.

Janua Coeli: Gates of Heaven – How the Summer and Winter Solstices are mystical gateways that lead beyond this world.

The Christmas Tree: A look at the history of the Christmas tree and its origins as a symbol of devotion to Our Mother God.

Send Questions or Comments on The Feast of the Epiphany