The Flag of European Union and Mary's Crown of Stars

Flag of European Union: The circle without a centre

The Flag of European Union may seem far removed from the Image of Our Lady Mary, but honoured Lady Aquila gives an interesting view of the relation between the symbolism of Our Lady's Crown of Stars and the star-circle of the European Flag.

Thank you for the fascinating information about Lady Mary's crown of stars in your page on Mary Statues. 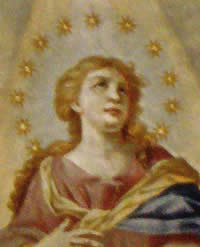 The Solar Mother at the heart of the crown of stars

Another point that should be made is that number of the stars is highly significant. The ring of twelve stars represents the twelve zodiacal (or "star") signs. As with other patriarchal sets of twelve, such as the Twelve Disciples or the knights of the round table, the central (or thirteenth) figure about whom they form is the Solar Hero.

Thus, once again, we see the solar nature of the symbolism of Our Mother God. She is the Supernal Sun Who governs the revolving year.

Incidentally, some people have remarked upon the ring of twelve stars used as the flag of European Union. Some have suggested the rather unlikely hypothesis that this is a covert Catholic symbol. If one considers the godless nature of the proposed "Federal Europe" together with the fact that symbolism is a living science with its own inexorable laws of expression, and takes this in the light of the symbolism of the twelve stars, the real meaning of this flag becomes apparent.

It is a ring of twelve stars with no central figure. The Supernal Sun is conspicuously missing, just as the Spirit is absent from the sterilised universe projected by this Promethean bureaucracy. A centreless universe is precisely the doctrine of modern scientistic materialism, and the centreless ring of stars is an astonishingly appropriate symbol for a supra-government based on this counter-religion.

Maria-sama no Kokoro: A beautiful online video of a hymn to the Immaculate Heart of Mary, with Déanic interpretation

Or go to: Our Lady Mary's main page