The Goddess Mother Mary
Eve as Creatrix, Mary as the New Eve 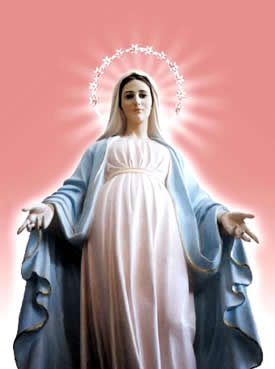 The question represented by the concept of the Goddess Mother Mary is closely related to the question of Eve. How are the two related?

I was fascinated by your essay on Creation Myths and the Virgin Mary, and I have been wondering how all this relates to Eve. It is as the "seed" of Eve that Mary treads the Serpent (in the "mistranslation" of the Septuagint) and in mediaeval times it was common to speak of the "parabola" (up-down-up) pattern beginning with Eve in Paradise, descending with the Fall and returning to paradise with the redemption of the world by Mary.

What are your comments on this?

The question of goddess Mother Mary is certainly bound up with the question of Eve, although this plays little role in the iconography or in the use of Marian images by many of us.

The name Eve is a Westernisation of the Hebrew name Chavah which means "Mother of all living". Clearly this term has a double sense and could be interpreted either as "Creatrix" or as "Universal Ancestress".

These two interpretations were probably not as distinct to the ancient mind as they are to that of the modern West. As we know "ancestor worship" in the East and in tribal traditions is in fact a particular form of the worship of the Divine. As Frithjof Schuon explains:

In reality...the Divinity Itself is conceived in the Far East as a kind of ancestor and one's human ancestors are like a prolongation of that Divinity, or else they are seen as a bridge between oneself and It. God is the Heaven or Sun from which we are descended...

This, of course is in keeping with the doctrine of the Cycle of the Ages (see our page on Kali Yuga) which tells us that the earliest ages are progressively nearer to the Divine state and even allows traditional peoples to see the Golden Age as a microcosmic reflection of Paradise itself.

While Eve is the Divine Ancestress, like the Japanese Sun Goddess Amaterasu, the name "Adam" means "earth" (and also red – red being the colour of Mars). Clearly this designation dates from a semi-matriarchal period, after the time when both Heaven and Earth were feminine but before the lesser element of earth was attributed to the feminine and the higher element of Heaven to the masculine. It dates from a time when the Divine Sun was feminine and the lesser element of earth attributed to the masculine.

In the later patriarchal re-writing, Eve becomes simply the "first woman" and the Fall is blamed upon her (while actually it is simply part of the process of manifestation). From being the Creatrix and Conqueror of the Serpent (cf Creation Myths and the Virgin Mary) she is said to have been deceived by the serpent into disobedience to the masculine god.

With the "deification" of the goddess Mother Mary, the true image of the Creatrix and Conqueror of the Serpent returns. Thus Mary was hailed in the middle ages as the New Eve and Queen of Heaven.

The Immaculate Heart of Mary: Radiant Centre of the Universe

Choosing a Statue of Our Lady Mary: A guide for devotees of Our Mother God

Mary Statues as Images of God the Mother: Further important information on statues of Our Lady Mary

Send Questions or Comments on the Goddess Mother Mary