The Imperial Theme – the idea of Empire as not merely a political unit but a saving community, an embodiment of the Way of Heaven, the Golden Order or Divine Thamë on earth – is known throughout the civilized (that is to say, city-based) world.

It is found in China and Japan, in India and Europe, and among the peoples of ancient Central America.

In Japan the Imperial Theme revolves around the Sun Goddess Amaterasu Omikami.

In Europe it was revived at the time of the Renaissance and was centred on the figure of Astraea, goddess of Order and Purity (in Filianic tradition the daughter of Sai Thamë), the last Deity to leave the earth at the end of the Golden Age, and who was expected to return at the end of the Era. 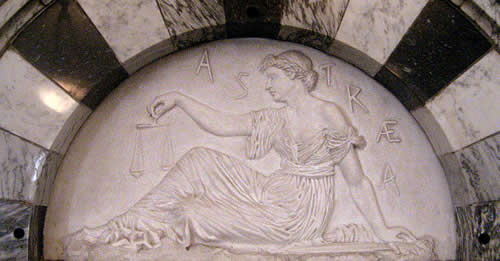 In England, Astraea was identified with the Virgin Queen, Elizabeth I (vide Dr. Frances A Yates, Astraea: the Imperial Theme in the Sixteenth Century).

As we have discussed elsewhere, the Renaissance gave rise to a brief resurgence of Traditional thought in the West, which was quickly submerged in the tide of "scientific" materialism. After this brief revival of its ancient significance, the Imperial Theme in Europe quickly became a matter of crude politics and finance – and the feminine element was forgotten at the same time.

In the Feminine Empire of Sai Herthe, the Imperial Theme revolves around the figure of the first Raihiranya (Empress), Sai Rayanna, the daughter of the Sun Goddess Sai Raya.

The following is a commentary on the first verse:

Clearly means, geographically: "from the inland mountains to the coasts" i.e. throughout the land. However, it also signifies metaphysically: "from the Centre or 'mountain-peak' from whose radiance all things take their being, to the outward world of flux and change".

"Troublèd" means "turbulent" but also refers to the inherent sorrows of the changing world of samsara. The underlying thought is that expressed in the Scripture:

Earth moves but Heaven is still
The rim revolves, but the Centre remains without motion.

While the troublèd, or turbulent, sea – beyond the shores of Empire – is pure samsara, the Holy Raihir itself is to some extent protected from the worst vicissitudes of worldly chaos by the Celestial Influence of the Solar Empress. This influence is described in the lines:

O, Rayan' thy rule doth run
As coursers of the sun,

Here we have the traditional image of the sun's rays as horses, galloping out from the central point, spreading the benign warmth and light of the Spirit into places that would otherwise be dark and "troublèd"

Rayan' is Sai Rayanna the First, the solar avatar who defeated the demonic forces then besetting the land and became the first empress of Sai Herthe, from whom all subsequent Empresses are descended and by virtue of whose blood they are termed Sun-Daughters.

The repeated pledge of allegiance is all-important, since it is only insofar as we affiliate ourselves in harmony and obedience to the Golden Order that we may be rescued by it from the turbulence of chaotic being.

Thus, the Imperial anthem is a hymn to the saving harmony of the Golden Order as manifested through the Celestial Empire and its Solar Empress.

This commentary only touches the first verse and chorus (the most commonly sung part) of the Anthem. For the full text and an account of the story of the Imperial Anthem, visit this page.

The Herthelan Imperial Anthem embodies the feminine version of the Imperial Theme at its finest and purest.

SAI RAYANNA DAY
The Day of Sai Rayanna is celebrated in late spring, on May 16th. In the following MP3 audio clip, honored Raya Chancandre explains the full significance of our Imperial Day, drawing parallels with American, European, Indian and Japanese traditions to illustrate parallels to the many-faceted and complex set of ideas that underlie the celebration of this joyful festival.

Send Questions or Comments on The Feminine Imperial Theme