Would Jesus really believe in evolution? 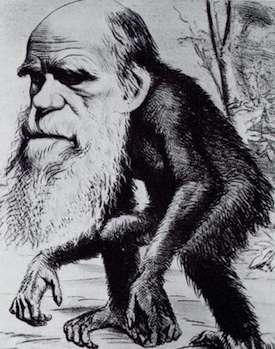 Dr Karl W Gilberson, in Jesus Would Believe in Evolution and So Should You says that Christianity holds onto the truth. Therefore, Christians should hold onto the truth of evolutionism – or so I understood from the text. He does make one or two sound remarks throughout this text, but I’m not sure what he means with them anymore. What do you think?

What a muddle-headed article this is! At times Dr Karl W Gilberson is telling us that there are two kinds of truth (divine, absolute Truth and "factual" truth about worldly things) but then he continually talks about one kind as if it were the other kind.

For example, Dr Gilberson begins by quoting Jesus as saying "I am the truth" – clearly a reference to Absolute Truth, not the truth about how many beans are in a bag – but then immediately applies that to mundane truth about physical facts and goes on to state (in my view quite profanely for a Christian believer) that because Jesus is the Truth, he would believe in a current theory of modern science, because many (but by no means all) scientists regard it as factual.

With huge arrogance, Dr Gilberson states that "science began in the 17th century" – as if the vast knowledge of the ancient Chinese, Indians, Arabs, Mayans, and other civilizations were not science because it was not cast in the mold of modern materialistic empiricism.

Dr Gilberson states, very correctly, that the Bible does not teach that kind of empirical science, and he makes a very valid point when he says that biblical evolutionists are confusing two kinds of knowledge. But he continually confuses those same two kinds of knowledge himself. His whole point is that because Jesus represents Truth (absolute) he would believe in certain relative supposed-truths.

What is wrong with evolutionism is not that it contradicts a naively literalistic reading of certain ancient texts. There are many things wrong with the popular mythos of evolutionism, but that is not one of them.

What is actually "wrong", in ontological terms, at least with the popularized version of the theory of evolution, is that it denies the pole of Essence or Form in manifestation, attempting to derive everything from substance or matter. It reduces the myriad forms of nature – which have always been regarded as "signatures" of transcendent Truths – to mere accidents of natural selection.

On a human level it also encourages people to think of themselves as animals and has, for example, been the philosophical (or de-philosophical) underpinning of the modern obsession with "sex" as the fundamental human drive or "need" and the general loss of human dignity inherent in modern popular culture.

Whether all this has much to do with the actual scientific theory of evolution is another matter. Many of the anomalies in evolutionism have led a large number of evolutionist scientists to postulate that the "transformations" of evolutionism are all inherent in the genetic structure of organisms from the beginning.

While this would leave evolutionism intact as a scientific theory (and continue to contradict a literal reading of Genesis), it would completely destroy it as a mythos that replaces Form or Essence with the accidents of matter. The implication is that Form, rather than being a product of evolution, existed from the beginning, and is merely revealed, or manifested, over the course of time.

This might be equally unacceptable to a very literal Biblicism, but it is completely in keeping with the metaphysical world-view of most ancient traditions, with the Platonic/Aristotelian Western tradition (which has underpinned traditional Christianity) and, of course, with the Faith of Our Mother God.

But whether this would have any influence on the popular mind is quite another question. For just as there are two forms of truth, so there are two forms of evolutionism. One is a scientific theory that changes and adapts like other such theories and that may or may not be correct in its present form – or indeed in any form. The other is a mythos or story-picture upon which the modern world has based its entire culture.

One of the problems with that is that many of the scientists shaping the theory are also believers in the mythos.

DISCLAIMER: The present writer wishes to make it clear that she does not believe (or strongly disbelieve) in that form of evolutionism which does not reduce Form to accident. As we have said, there are two forms of truth:

Absolute Truth we believe because it cannot

Relative, or "scientific" truth is, and should be, subject to constant review. It can never, by its very nature, be one hundred percent certain, and, from a religious or ontological point of view, it is unimportant.

What the Scriptures say:

22. Therefore when you think upon the questions of life, of time, of seasons or the spheres, contemplate first the seed of Truth, and let your thoughts unfold from that seed. 23. Let the pure and single note of Truth attune your soul. Then shall mind rise up into soul, and soul breathe the breath of Spirit.

24. This do, and your thoughts shall be harmonic with the universal music of Eternity. 25. But let your thoughts grow from lower or from lesser or from merely accidental things, and they shall wax rank and dissonant; 26. For it cannot be that the Tree of Life shall grow from the seed of a nettle.

The Gospel of Our Mother God