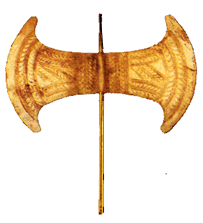 The Labrys, or double Moon-Axe, is found in many parts of the pre-patriarchal world.

It has been picked up by modern feminists and "goddess" groups with little understanding of its actual meaning and used as a symbol, to the point where it is regarded by many devotees of Our Mother God with some suspicion.

And yet the Labrys, or "Great Moon-Axe", appears in the narrative of Our Lady's death and is highly significant.

What, then, does this ancient symbol actually mean? It is, in fact an important device, closely related, and complementary, to the symbol of the Heart.

We have pleasure in reproducing an essay some three decades old in which the Filianic symbolism of the Labrys is made clear.

In seeking to understand anatomical symbols such as the heart. it is important to realise that they refer to Realities far beyond the physical plane

It has been suggested, for example, that the cave (a symbol crucial to the Nativity Mystery) is a symbol of the womb. Now in a certain limited sense this is true; and in the same sense it is true that the womb is a "symbol" of the cave. But it is far truer to say that they are both equally symbols of a transcendent Reality which lies far beyond either of them; and truest of all to say that they each uniquely represent a subtly different aspect of that Reality, and that only that particular symbol can express the exact nuance of truth which it embodies.

For the whole point about symbols is that they refer to realities that cannot be expounded in words. They are not simply poetic devices, but precise instruments of knowledge. The meaning of a symbol can only be comprehended by a direct act of intellection through contemplation; and the verbal exposition of a symbol can never be more than a "support" to that contemplation, and never a substitute for the symbol itself.

Nevertheless, the "support" is necessary in order to give the correct direction to the contemplation. For, being an objective instrument of knowledge, there can be no more value in a "personal interpretation" of symbols than in a personal mathematics.

Both the heart and the moon-axe are connected with Easter. The Labrys was taken from our Lady at the first gate of Hell, and when Her body was hung upon the Pillar of the World, "above Her head they hung the great Moon-Axe, in symbol of the greatness of the deed." (Mythos V,19).

A heart pierced by a sword, or by seven swords (representing the seven gates of Hell) is a familiar symbol of our Lady's passion.

The heart is nowadays the more familiar of the two symbols, but in matriarchal times the moon-axe (or labrys) was equally widespread. It was the emblem of the divine authority of the priestess-queen in the Cretan Empire. It was widely used among the Amazons and the matriarchal Lydians, Lycians and Etruscans, and in pre-patriarchal Rome. It is painted on the temple-walls of the recently excavated 10,000 year old matriarchal city of Catal Huyuk in Turkey, and carved into the sacred stones of pre-Celtic Stonehenge.

The heart, despite its apparent simplicity, is an extremely complex symbol. As the centre of the human microcosm, it is analogous to the sun, the centre of the cosmos, and therefore, in its highest aspect, a symbol of pure Spirit Light and Intellect.

At the same time it is also the centre of Divine Love within the human microcosm (hence the traditional association of the heart wth love), thus combining the Mother-qualities with the Daughter-qualities. 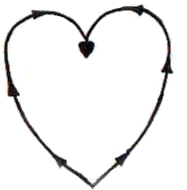 Thus the solar Mother-nature and the lunar Daughter-nature are united in one symbol. It may thus be seen that the riving of the heart by the sword symbolises the final rupture of Daughter from Mother. The last thread joining the separated pair is broken, and – since the Mother is the very essence of being – the Daughter plunges into extinction or non-being; not merely the physical symbol of death that we experience at the end of earthly life, but Death itself – complete spiritual death, which no other being in the universe has ever undergone.

The double-curve of the heart shape also shows the Mother and Daughter united at the point of origin, their progressive separation, and finally their heuresis at the central cavity of the heart, which is also the centre of the universe.

From another point of view, they may be seen as emerging from the central cavity (which is analogous to the Cave of the Nativity) and descending until they meet at the "lowest point". This "outward" movement tells the story of our Redemptrix from the Nativity to Her death, ending with the reunion with Her Mother which is the point of Her Resurrection.

In each case the "movement" of the Mother is in a sense illusory, since She is always in the Centre and in all other places. This is reflected precisely by the physical "movements" of the sun and moon, for while the moon really does move about the earth, the "movements of the sun through the daily and yearly cycles are really our own movements about an unmoving centre. The lunar daughter, on the other hand, having become maid, really does enter into the world of flux and movement.

Viewed in human terms, the diagram of the heart represents the two parts of maid: the lunar soul (psyche) and the solar Spirit. which converge in "the innermost Temple of the heart". The Spirit in maid is the true Self – the perfect reflection of an unique facet of the Divine Spirit; while the soul, insofar as she is fallen, represents the false self. the "selfish" egoity which desires to preserve its separateness from God. Here again, there must be a death on the "lunar" side – the death of the false self – before the final heuresis can take place. For if a maid would find her Self, she must first lose her self.

The two moon-blades of the labrys, one crescent (waxing) and the other decrescent (waning) , correspond respectively to all the oppositions and complementarities which are the necessary condition of manifest existence: life and death, summer and winter, pleasure and pain, activity and rest, day and night, etc. The labrys is strictly equivalent to the far-eastern yin-yang symbol, itself a device of matriarchal origin.

Yet the crucial point of the labrys is not the axe-head, but the central haft that passes through it. This haft represents the world-axis that passes through the centre of the cosmos, and upon which maid, the "central" being on her own plane of existence, takes her station (provided she is true to her own nature, or thamë).

This is made abundantly clear by the fact that in the Mythos the labrys is hung upon the Pillar of Hell, which is in truth the lowest section of the World-Axis.

In Aristasian iconographic depictions, the axe-haft is always shown parallel to the pillar. The haft, therefore, represents maid, or psyche (soul) as the mediatrix between earth and Heaven and between all the dualities of manifest existence.

The upper part of the haft, above the blades, represents the transcendent "shaft of Sunlight": the permanent Essences or Divine Ideas that are manifested through the impermanent and dualistic "play" of matter. This shaft of Solar, Essential Light, descending from above, is represented only by a short section of the haft, indicating its "point of descent". This is because the moon-axe represents the cosmos seen from "below" – that is from a human and psychic rather than a transcendent and Spiritual point of view.

Nevertheless, it is a vital element in the symbolism, for psyche (or maid), in a higher sense, mediates between the transient flux of matter itself and the eternal Essence which it imperfectly expresses. At the same time, being on the Axis, she is a continuation of the Essential light, just as the lower portion of the haft is a continuation of the upper, while the blades represent a development (or "world") at one particular level of existence (the material in this case), branching off the haft at one particular point. That is why psyche alone (whether Our Lady as Perfect Soul, or maid as Her regent) can redeem material creation.

The Axis descends through every level of being, both above and below the material as we know it, and countless "worlds", both super-physical and sub-physical, branch off it at the different planes. The labrys, however, simply gives us a concise picture of our own particular level of being, its situation in psychic and spiritual "space", and our place within it.

From a slightly different perspective, we may take the parallel symbols of the heart and the labrys as symbols of the contemplative life and the active life respectively. The heart represents the mystical heuresis, the return of the soul to the Mother. The labrys is an image of life in thamë, with maid acting in accordance with her true nature as mediatrix and princess regent of the world.

It is for this reason that the labrys was the emblem of the divine authority of the royal house of Crete and other matriarchal states: for a princess is supremely a mediatrix, and rules not according to her own wishes, but wholly in obedience to the law of thamë.

This is equally true of every earthly mistress, whether countess, mother or ranya. The labrys is thus a symbol of harmony, obedience and right relations. As such, it is the emblem not only of the life of the old matriarchal nations of the earth, but also of the Déanic way of life in every Aristasian household, and among all who live according to the law of Heaven.

Yet this active life can never be separated from the heart-principle; for just as Our Lady's sacrifice makes all existence possible, so it is the contemplative essence within the active life which provides its sole meaning and justification and makes it a life fit not merely for a living-machine or survival-programmed animal, but for maid, the mediatrix.

Send Questions or Comments on The Labrys and the Heart