Living Scriptures
of Our Mother God 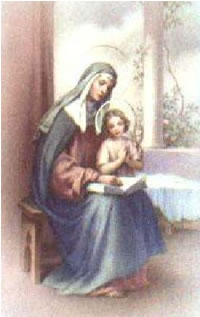 Living Scripture is an essential part of spiritual life and the practice of faith. Devotees of Our Mother God are confronted with certain problems in this area.

While in theory the oldest religion – that of Our Mother God — should possess the oldest scripture, that is not in fact the case. For we are confronted both by the lack of a living Tradition and the fact that even surviving traditions that revere the Feminine Divinity (such as certain branches of Hinduism) are cast in a firmly patriarchal social and cultural mould.

The patriarchal canonization of Scripture has, even where it draws on the oldest scripture traditions, always entailed a considerable degree of patriarchal re-editing.

Déanists have found two approaches to this question, each of which we shall represent here. The first is that of taking existing patriarchal living Scriptures with a feminine or near-neutral approach to the Absolute, selecting and where necessary making translations that are acceptable to a fully-feminine worship without doing violence to the original.

The second approach, which is complementary to the first, is the use of the Filianic Scriptures. These writings first appeared publicly in the 1970s and express in poetic language the basis of the Filianic faith of Mother and Daughter.

Some regard these writings as true living Scriptures, while others see them essentially as inspirational poetry telling a form of the Archetypal Mother and Daughter Mythos and expounding sacred Truths.

Many Chelouranyans regard them as a direct reflection of the Scriptural traditions of their spiritual Motherland and at least one group (no longer active) has claimed them as part of a "secret tradition" going back into ancient Tellurian history. This last claim, we feel, can be discounted. It is indeed possible that they represent the spirit of a much older tradition, but we are inclined to doubt its continuous practice and also feel that these myths are couched in a form (some would say Providentially) suited to the spiritual, emotional and intellectual needs of the later Kali Yuga.

This would indeed be a necessity, since all traditions that have survived (including the most ancient: Hinduism and Taoism) have undergone radical modifications; not, certainly, in order to change their Essence, but in order to adapt themselves to the consolidated and much more limited nature of the current humanity. Only thus could they continue to serve the human needs of the past two and a half millennia. (We may not that most of the most recent major "adaptations of tradition" – other than the "new world religions" of Christianity and Islam – took place in or around the 6th century B.C.)

This very fact means that even if it were possible to recover the oldest Scripture of the truly feminine traditions of earlier times, they would not be efficacious for us and would be in the same condition as the Northern and Classical "paganisms" which (unlike their close Indian cousin) did not adapt to the new conditions and therefore dwindled away to be replaced by fully effective new traditions (see Pagan Religion).

As devotees of Our Mother God, therefore, who are devoted to Her because we cannot be otherwise, we use a corpus of Scripture from compatible Tellurian tradition without the patriarchal accretions and also the Filianic Scriptures, which, even if taken at their "lowest" interpretation, as inspired poetry, are, we believe a sound basis for devotion and worship.

It should be noted that Déanists are not a "People of the Book" like the three Abrahamic religions. We are not devoted to a particular and strict Canon of Scripture, but directly to Our Mother God.

Even in Christianity, the canonization of Scripture has been a contentious procedure taking three centuries and several Councils; and even Martin Luther, the father of "Bible-believing Protestantism" was able to reject the Epistle of James as "an Epistle of Straw".

From our perspective, the importance of a Feminine Lectionary or Canon of Scripture is to give a sound Scriptural basis to our Faith and practice. The notion of the "revealed Word of God" can be a difficult one – even for the Abrahamists.

But the concept of Divine Truth, revealed by Our Mother God and faithfully expressed in Scriptural writings, is all-important. This is the basis of the Living Scriptures of Dea.

An important part of this "canonization of Scripture" consists in putting forward Authorized Versions of the Filianic Scriptures.

This is necessary because many of them exist in various versions, some of which show signs of having adulterated with a certain amount of such things as "New Age" influence and "lunarism", and of having suffered in the course of being adapted to the use of mixed congregations. In some cases the beautiful language of the original versions has been "translated" into flat, utility-company language that loses much of the beauty and symbolism of the Sutras.

The Authorized Versions of the Filianic Scriptures attempt to preserve and present them in their purest form.

You can find these Authorized Versions in The Gospel of our Mother God. in an edition that has proved invaluable to many Déanists as well as to Filianists as a treasured source of Light and inspiration.

Pagan Religion: what is it?

Send Questions or Comments on Living Scriptures of Our Mother God