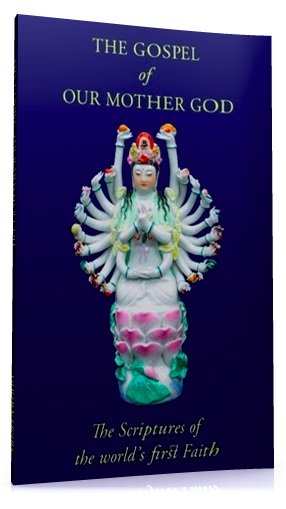 Lux Madriana was a religious movement active in Britain in the 1970s. Relatively little is known about it and it ceased to exist toward the end of the decade.

Its main claim to being remembered is that it was the first organization to publish the Filianic Scriptures – or at least a version of them – as well as some internet-based attempts to revive the movement in the early 21st century.

Because Lux Madriana was the first organization to publish (a version of) the Scriptures it is often taken as the originator of them, and they are sometimes attributed to "a member of Lux Madriana" and even referred to as "the Madrian Scriptures".

It is important to understand that even Lux Madriana itself never claimed to have originated the Scriptures. What it did claim was that it was heir to a "secret hereditary tradition" still extant in the British Isles.

That claim was demonstrably false and we do not believe anyone today upholds it. It may have been a "poetic" way of expressing the spiritual heritage of the Scriptures, but as a literal statement it is not factual.

The Scriptures seem to have been "revealed" to a person or persons in Oxford in the 1970s. They were in use by several, sometimes overlapping, groups of which the Madrians were one and the early Aristasians another. The writer or writers did not associate their names with the work because they did not see it as an individual production (this is a very normal traditional attitude) but a "revelation" and did not wish any personal element to enter into it. The Scriptures, it was felt, should be judged on what they are, not on where they came from.

The term "Madrian Scriptures" is appropriate only in describing the particular version used and published by Lux Madriana, a version which many hold to be far from the best or purest.

Some early Aristasians in Telluria believed the Filianic Scriptures to be equivalent (not identical) to those used in the Motherland and adopted them and the Filianic faith. Others felt doubtful because of their recent Tellurian origins and lack of tradition.

The debate continued for years in Aristasia, but even while the theory was debated, in practice the Filianic Scriptures became the basis of much Aristasian devotional practice in Telluria. They won the hearts of Aristasians because of their purity and truth.

This was partly aided by the fact that Aristasians had always sought the purest texts – those untouched by the New-Age accretions that gathered around other versions.

Examples of this are found more recently in the so-called "Amazon Method" invented by a gentleman claiming to represent Lux Madriana (the organization, while at times mixed, did not ever allow males into positions of authority or teaching) and in some highly unsound pseudo-metaphysical commentaries. Worse still, the Scriptures have been adopted (predictably in the Madrian versions) by "female domination" cults that mix religiosity with soft pornography.

Part of this was undoubtedly caused by the fact that the Madrians, during one of their "mixed" phases, seem to have edited the Scriptures to include references to males.

Probably such corruptions were inevitable and this was very likely one reason why everyone other than Lux Madriana was so cautious for so long about making the Scriptures public.

The Aristasian approach has been cautious in the extreme – some might even say too austere – in accepting only those Scriptures that are absolutely free of any doubtful material.

In terms of religious practice, the Aristasian approach was to leave the question open as to whether the Filianic Scriptures were regarded as Revealed Scripture or poetic expressions of faith; and also to examine the parallels between Filianic religion and the Sanskrit tradition, the worship of Kwan Yin and other traditional Déanic expressions, making it clear that each of them is essentially a different way of understanding the same Truth. Western ideas of religious exclusivism and literalism were deconstructed and the idea that one could take Filianism as an enhancement to a Déanic faith without having to over-literalize it became the key to much modern Filianic worship.

Much of the work of this site is indeed based on the pioneering groundwork lain down by the Aristasians.

Out of this has come The Gospel of Our Mother God, a text which is accepted by Aristasians and non-Aristasians alike, which adopts a rigorously cautious approach to the Scriptures, accepting as canonical only those without a trace of adulteration, and places them side by side with Sanskrit and other Déanic texts to make clear the unbroken heritage that comes not from a "secret tradition" but from the simple and eternal unity of the Truth of Our Mother God.

After publication of this article we received the following note from a correspondent familiar with the Lux Madriana movement:

When it is said that Lux Madriana was the first organization to publish the Filianic Scriptures, this is correct but a little more detail could be added here. We need to remember that we are talking about the 1970s before the internet and before desktop publishing. Publishing anything was a complex and expensive process.

Only a minority of the Scriptures were actually issued in booklet form: the rest were simply circulated as hand-typed papers that were photocopied or retyped. This made them very vulnerable to alterations and redactions. We continue to see these to this day. The addition of male elements, for example, and of "clearer" wording that implies New-Age ideas.

Lux Madriana actually tried to regulate this process by stamping copies circulated within its sphere of influence with the "Madrian Literature Circle" imprint; however, there were several "Madrian" versions in many cases, and many others outside the Madrian ambit.

Lux Madriana's published version of a part of the Scriptural body had already been circulated in this form for some time beforehand and was subject to this process.

The nearest thing to a definitive version is that found in The Gospel of Our Mother God which is the product of careful research and metaphysical understanding of the texts (sadly lacking elsewhere), together with a very cautious approach that puts the emphasis on creating a spiritual resource that can be trusted.

The Gospel of Our Mother God

Send Questions or Comments on Lux Madriana and the Filianic Scriptures