Matriarchal History
The Preface to The Feminine Universe 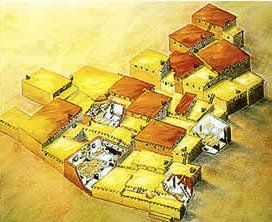 "STONE AGE" CITY: Reconstruction of the city at Catal Huyuk from 3500 to 2700 BC with cutaways for kitchens, bedrooms and living quarters. All major statuary was feminine.

With this run-down of the matriarchal history and feminine religion which constitute the first nine-tenths of human life on earth, the preface to The Feminine Universe sets the scene for the rest of the book.

This breathtaking volume, with its mistresslike exposition of the Primordial Tradition, followed by the most penetrating analysis of the flaws of modern patriarchal civilization, begins with a brief historical prelude reminding us who we are and where we came from.

"The Feminine Heritage" reviews our matriarchal history and reminds us that not only was there a time before male dominance and the gods of war, but that it constitutes the very basis of our civilization and the vast majority of our history.

Preface to The Feminine Universe

It is remarkable that the many varied and highly expert author-archaeologists in the excellent series Ancient People and Places express their wonder at the evidence they have found that women were once pre-eminent in each of their areas of research, from the Near East to Ireland. Each writes as if this ancient dominance of women were unique and peculiar to his archaeological province. Yet taken all together these archaeological finds prove that feminine pre-eminence was a universal, and not a localised, phenomenon.

[Our present civilization stems from] a common cultural inheritance throughout an area extending from Mesopotamia to Egypt and the Ganges to the Mediterranean, [founded upon] the worship of the Great Mother.

"When above the heavens had not been formed, when the earth below had no name, Tiamat brought forth them both. Tiamat, Mother of the gods, Creator of all." 1

SO BEGINS the earliest known account of the creation of the world. Moving from the Near East to Europe, the earliest known creation story is the pre-Hellenic Pelasgian Creation Myth, which depicts the creation of the universe by Eurynome, the Goddess of All Things. Commenting on this in his classic study of the Greek myths, Robert Graves says: "In this archaic religious system there were as yet neither gods nor priests, but only a universal goddess and her priestesses, woman being the dominant sex."2

In all myth throughout the world, the original Creator is feminine. It is only with the coming of a masculine-dominated (patriarchal) social system that She is replaced by a male god. Sometimes (as in the case of Tiamat above) She is said to have been conquered or killed by the new god. Sometimes the patriarchy boldly changed the sex of the Deity without changing the name—as with Ea in Syria, Shiva in India or Atea in Polynesia. Sometimes the goddess was slowly edged out and the god edged in. W. R. Smith points out that the goddesses of the ancient Semites "changed their sex and became gods" in historical times3 while Atea, the supreme God of Polynesia was a Goddess as little as 500 years ago.4

Often the new cult of the male god could only be made to replace the original religion of the Goddess by a very severe patriarchal régime. This was the case with the Hebrew Jehovah.5 Even then, the people frequently reverted to the worship of 'the Queen of Heaven', much to the chagrin of the patriarchal prophets.6

Turning from the 'historical' to the 'prehistoric' period—that is to say, to that vast majority of human history for which written records no longer exist or have been re-written by patriarchal redactors—the material evidence makes it clear that the religion of the feminine Deity was predominant for thousands of years.

James Mellaart, probably the world's foremost authority on Near Eastern archaeology, writes in his famous survey of ancient Near Eastern civilization: "Between 9000 and 7000 b.c. art makes its appearance in the Near East in the form of statuettes of the supreme deity, the Great Goddess."7 Mellaart states that historically "the cult of the Great Goddess" is "the basis of our civilization."8

In a similar survey of ancient European civilization between 7000 and 3500 B.C., Professor Marija Gimbutas explains how recent archaeology has given us a clear picture of this period, unearthing some 30,000 sculptures of clay, marble, bone, copper and gold from some 3,000 sites. Clearly a vast area and a great period of time are involved (much longer than the whole known 'historical' period), yet certain general statements can be made covering the entire civilization. Prof. Gimbutas shows that the Creator of the world was regarded as a Goddess (like Tiamat, often symbolized as a bird), that the Great Goddess was "the central figure in the pantheon of gods" and that "the pantheon reflects a society dominated by the mother".9

We may go back further, say to the Gravettian-Aurignacian cultures, sites of which have been found in Spain, France, Germany, Austria, Czechoslovakia and Russia, and recently as far afield as Anatolia in the Near East. Some of these sites date back well over 25,000 years, and in these virtually all statues, divine or human, are female.

In the period after 9000 b.c., the pattern tended to follow that stated by Mellaart in connection with ancient Hacilar (c. 5800 B.C.): "The statuettes portray the Goddess and the male appears only in a subsidiary role". But in the older Gravettian-Aurignacian cultures, the male scarcely appears at all. What we have is a vast preponderance of stylized female images, known to archaeologists as "Venus figures".

We might go back further still, for example to the Venus of the Wildenmannisloch Cave, which is at least seventy thousand years old, but as we recede into such distant eras, dating and interpretation obviously become more difficult and conservative scholarship becomes cautious. Let us, therefore, remain with the wealth of well-attested and generally accepted fact.

What were they like, these prehistoric civilizations? Archaeologists refer to them as Palaeolithic (old stone age), Neolithic (new stone age) etc.—terms which to the average person imply brutish 'cave-men' dressed in skins and barely able to speak. Serious archaeologists have not believed in this popular myth for the best part of a century now, but the discoveries of the last forty years in Europe and the Near East have shown that it is so far from the truth as to be ridiculous.

Let us take Hacilar, mentioned above in connexion with the predominance of the female image. This 'stone-age' community lived in two-storey houses, often thirty feet in length, arranged about a central courtyard, with ovens, kitchens, hearths upstairs and down, verandas overlooking the courtyard and numerous other 'civilized' features.10

Cutaway reconstruction of part of a building at Hacilar, circa 5800 BC. Statuary predominantly feminine with occasional male figures in subsidiary roles.

This example is entirely typical. We find similar conditions all over Neolithic Europe and the Near East and as far afield as Dravidian India. Furthermore, these societies were not separate developments, but as the great Indologist, Ananda Coomaraswamy, points out, the fruits of "a common cultural inheritance throughout an area extending from Mesopotamia to Egypt and the Ganges to the Mediterranean" based upon "the worship of the Great Mother".11 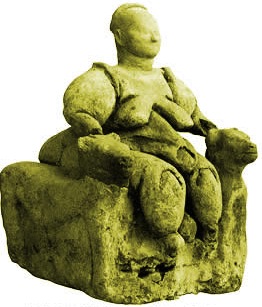 Enthroned Lady: One of countless regal feminine figures at Hacilar. Male figures are rare and subordinate.

It may well have been a matriarchal civilization in which certainly the priesthood, and very likely the heads of families and of State, were all female. The concept of feminine supremacy is so alien to modern minds that many male scholars have described it in terms which imply abject subjection on the part of men. Speaking of Catal Huyuk, the oldest town at present known to archaeology, Mellaart, who was the excavator, speaks of "man's subservience to woman".12 Charles Seltman says of the pre-Mycenaean Greeks "religion and custom were dominated by the female principle, and men were but the servers of women".13 Graves says that men, as the "weaker sex" "could be trusted to hunt, fish, gather certain foods, mind flocks and herds . . . so long as they did not transgress matriarchal law".14 J. J. Bachofen says that in prehistoric times "woman towers above man", and speaks of "the contrast between the dominant woman and the servile man".15

This assumption of man's abject condition in the ancient world is but the result of an ingrained patriarchal prejudice which baulks at the overturning of his 'natural' superiority. To an unprejudiced eye, what emerges is a picture of a peaceful civilization of small towns, villages and a few small cities, based on a common religion and philosophy, and where, under clear feminine leadership, "all the resources of human nature, feminine and masculine, were utilized to the full as a creative force."16

It is also likely, judging from the complete absence, rather than subordinacy, of the male image that, at least in many places, the centre of civilization was a predominantly feminine affair in which men played little part, and in which relations between women, at least among the upper echelons of society, were considered more important than their relations with men. This would be parallel with the pattern in patriarchal societies such as ancient Athens, pre-20th century academic communities, religious hierarchies and so forth.

For a refutation of the modern academic attack on the concept of matriarchy, see The Myth of the Myth of Matriarchy.

This brief preface on matriarchal history is taken from The Feminine Universe.

This seminal text on the ancient wisdom and its modern applications is available for US$19.99 in the United States. Just click the button below to buy with any major credit card or with Paypal: