Matriarchal Society and the Position of Women 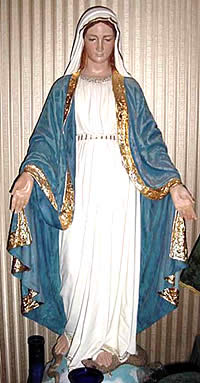 Q. I am very interested in the concept of matriarchal society, so I read with interest your piece on The Myth of the Myth of Matriarchy. One question, though. Some feminists have argued that in known societies where a mother Goddess is worshipped, the position of women is not better than in societies dominated by male religions.

Marina Warner in Alone of All Her Sex argues that the "Deification" of the Virgin Mary has even led to a worse social position for women.

Might this not dispose of the idea of ancient matriarchal society based on the dominance of Goddess images?

How do you respond to this?

A. In making this site we have become painfully aware of how very rare, in any patriarchal society, is a "pure" image of Dea – that is, Dea without a male "consort", "father", "son" etc.

The societies referred to by these critics, despite being, to whatever degree, "goddess-worshipping", are clearly patriarchal societies, and their iconography clearly shows it.

We certainly should not. We should find pictures of kings and priests and of the powerful men who dominate every area of life.

The cultus of our Mother God is very potent. Wherever a society allows it, She tends to come back into religious predominance. Obviously we regard this as valuable and important. In the end, spiritual life is more important than material life, and the fact that our Mother God makes devotion to Her possible everywhere – and wherever possible She reappears in Her original Feminine Form – is one of the Graces that She bestows even in the depths of the patriarchal Kali Yuga. Yet this does not end the patriarchy or make Kali Yuga cease to be Kali Yuga.

Consequently, in all patriarchal versions of "Goddess worship", we see Her supposed "consorts" and other male appendages. Even in the most devout Mary-worshipping areas, how many pictures of Jesus, the Prophets, the Apostles and God the Father will you see?

Thus the argument that the worship of a "goddess" does not improve the lot of women (socially speaking) in a patriarchal society may indeed be correct.

But to apply this to the profoundly female-centred iconography of prehistoric matriarchal society is really comparing apples with penguins.

What the radical change in iconography, found throughout the world, indicates is precisely that iconography is vital to the structure of a traditional society. Patriarchal societies seem to have needed to insert male images at every level into the formerly female-dominated iconography: because they certainly did it everywhere, with depressingly systematic regularity, regardless of whether their societies were "Goddess-worshipping" or not.

What does this logically indicate about societies where the female image was actually predominant throughout?

The Feminine Heritage: learn the truth about "Matriarchy"