Mommy and I Are One 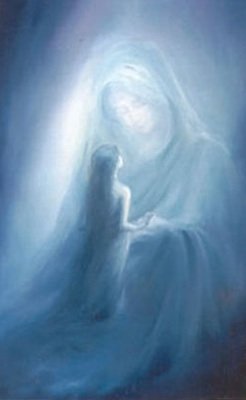 Our discussion of the phrase "Mommy and I are one" began with a short news item on The Chapel Chronicle: Research on the effectiveness of subliminal messages shows that while the popularly imagined ability of subliminals to implant ideas is of very limited effectiveness, if any, there is a certain message – only one – that does have a real effect:

A couple of years ago researchers Lloyd Silverman and Joel Weinberger published a paper summarizing numerous experiments, the gist of which was that if you flashed a certain message before and after some other, more conventional training technique (e.g., antismoking therapy), you greatly enhanced the therapy's effectiveness.

Now things start to get weird. The most effective message is said to be "Mommy and I are one." This is supposedly because "there are powerful unconscious wishes for a state of oneness with 'the good mother of early childhood' … and gratification of these wishes can enhance adaptation," according to Silverman and Weinberger.

S&W pointed out the following facts: (1) psychologically neutral messages, such as "people are walking," have no effect; (2) disturbing messages, such as "Destroy Mother," have a negative effect, at least on psychiatric patients; and (3) in areas such as the south where the usual term of affection is "Mama" rather than "Mommy," "Mommy and I are one" has no effect.

Interestingly the "key message", the true hidden desire of the human soul, has nothing to do with "sex" despite what modern western culture would lead one to expect.

The real desire is to return to Mother. As the researchers say, "the good mother of early childhood".

Of course this part rests on the materialist assumption that our motivations are all based on this-world experiences. Looking at the matter more realistically from a spiritual perspective, we would say that the One True Desire is for THE Mother, the eternal, all-good Mother worshipped by all cultures before the artificial religions of patriarchy.

We cannot help but note that after millennia of "Father God" propaganda, the message "Daddy and I are one" has no effect.

A few millennia of heresy has no effect on the eternal human heart.

This brought quite a flood of comments, of which we published the following:

It is clear that “the good mother of early childhood” is not one’s actual mother. It is either an inbuilt intuition of the Divine Mother or an idealization of our own mothers that for some reason we all possess.

Modern psychology, which is committed to explaining all things in terms compatible with a fully materialist universe, can only opt for the latter.

However, whichever way one takes it, it is clear that there is no equivalent “good father of early childhood” hard-wired into the fundamental workings of the human psyche.

It is surprising, then, that modern patriarchal academics are so hostile to all the evidence of the universality of the Religion of the Mother in ancient times.

Even if one wishes to “psychologize away” religion as a phenomenon of the human mind, the historical primacy of Our Mother God is the only thesis that makes sense.

I find it fascinating that the phrase that emerged from this research was "Mommy and I are one".

Union with Godhead is the aim of religion. From a humanist point of view the wish to re-merge with the Mother, to negate one's own individuality and move to a point of pre-separation would seem a very strange one.

On the other hand, from the Filianist perspective, which sees our separation from the Mother as the fundamental problem of human existence: the real nature of "original sin".

"Mommy and I are one" from a secular humanist standpoint can only be seen as a strange, world-denying wish for the individual non-existence that preceded our birth.

From the Filianic perspective "Mommy and I are one" is a concise statement of the goal of the individual and, indeed of the cosmos, when all creatures shall return to Dea "even to the last blade of grass".

So it is either a psychotic death-wish, or the supreme aim of the world's first Faith.

It seems to be the root desire of the human mind, so it would seem to be that at its deepest level the mind is either mad – in the sense of wishing to negate its own existence – or devoted to Our Mother God.

I would tend to believe the latter.

These are fascinating thoughts indeed, and we should like to take the matter a little further.

Back, indeed, to the fundamental statement of the Faith of Our Mother God, the Filianic Creed

The very first Statement of the Creed is our birth from the Eternal Mother:

I believe that I am created
from before the dawn of time
by the one eternal Dea.

In the middle of the Creed we find the statement of our separation from the Mother:

I believe that I was made a perfect creature
and at the dawn of time my soul did turn
from the Perfection of existence
in the infirmity of her sovereign will:
And through this fault do I suffer
the limitation of imperfect being.

And the very last words of the Creed are:

And I believe, through Her triumphant life,
My soul shall rise renewed in her perfection
that she may return to eternal communion
with the one eternal Dea.

Of course there is more in the Creed than this, but it is clear that its very opening and closing statements represent the state of being "Mommy and I are one".

In the beginning Mommy and I (every "I") are one. And at the end of time Mommy and I shall be one again. And everything that takes place between those two Onenesses is but the journey that takes us back to "Mommy and I are one".

So if "Mommy and I are one" is indeed a statement of the most fundamental human desire – the desire that motivates us above all others, should that be surprising for a devotee of Our Mother God?

Isn't that exactly what we say in our Creed at every Service of worship? Is there, indeed, any other phrase that so exactly expresses where we, and all creation, have come from, and where we are going?

The Creed of Our Mother God

Is There Life after Death? Immortality and the soul

Send Questions or Comments on Mommy and I are one