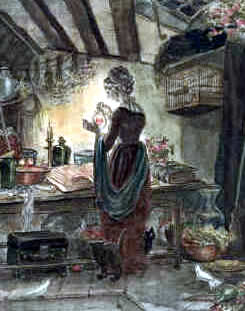 Thank you for the God as Mother FAQ This really clarifies things wonderfully. People ask me these exact same questions about worshiping the Divine Mother only. I kind of knew the answers, but I could never put them so clearly. Now I can. Thank you!

Here's a question. You say about certain aspects of New Age thought:

Modern psychology, evolutionism, recent political ideologies, bits and pieces of popularised "science" and the whole anti-traditional world-outlook of the last few Western centuries are the glue that holds together various out-of-context scraps of traditional Wisdom. From a spiritual point of view this is rather like fitting odds and ends of genuine geographical information into a flat-earth framework.

I can see the flaws in evolutionism (at least the popularized Darwinist mythology) but are you saying science in general is wrong?

Thank you for this interesting question. When one asks whether "science in general is wrong", one is speaking almost as if "science" were a set of doctrines or beliefs – a sort of religion. Sadly, that is what many people in the West take it to be.

Actually, the term "science" – in the modern sense – properly refers to a method of enquiry into the physical universe. It is a set of observations, and theories based on those observations. The theories change quite often. They are supposed to change. Science does not deal in Absolutes, or in Truths, the way a religion does, but in probabilities.

What is called "scientific fact" actually means the balance of probability according to this particular approach at a given moment in its investigations. At an earlier moment it was different. At a later moment it will be different again. That is the scientific method.

Early in the 20th century, Theosophists and others (the forerunners of New Age thought) formulated "New Spiritual Truths" based on the scientific theories of the day. Most of these are now hopelessly outdated.

The same will inevitably happen to current "Spiritual" theories that "take into account the Latest Science" (actually, it is usually rather old science already, by the time it gets into newspapers and popular books and is picked up by New Age Thought).

Traditional Wisdom is quite another thing. It is not based on observations made by our physical senses and theorising (guesswork) based on them. It is founded in the direct apprehension of Truth, as validated by realised beings (saints and sages) and enshrined in canonical Mythos and Image.

Its guarantee is that (as we have shown in many of our pages) it is, with certain variations of cultural "language", the same across all traditional cultures. It is not – as the modern West imagines – random human opinion; it is sacred science.

As a guide to how to build a steam engine or a nuclear reactor, traditional Wisdom is useless. As a guide to spiritual realities, modern science is equally useless.

We are not saying modern science is "wrong". We are saying that applying it to spiritual concepts, in the manner of certain elements of New Age thought, is like using a screwdriver to plough a field.

It is the wrong tool for the job.