Our Mother God and the World-Illusion 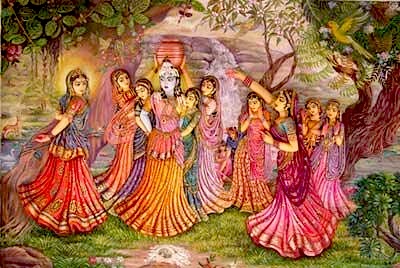 The world as the Divine Play of Sri Lalita

Non-dualism is often associated with the Vedic tradition, though it is certainly not only found there. As was made clear in the introductory article What is Filianism, the Filianic tradition, while in some ways very superficially resembling Christianity, is actually closer to the Dharmic than the Abrahamic traditions.

However, non-dualism is not exclusive to the Dharmic religions. It is equally inherent in Taoism and the various branches of shamanism, and when the Abrahamic religions venture toward their "esoteric" sides, they too begin to border on non-dualism since non-dualism is simply the fundamental way of expressing transcendent Truth.

While some people have suggested that non-dualism is a recent Asian-influenced addition to the Filianic faith, this clearly is not the case. The Filianic sutra Cry Marya, which is part of the Filianic Scriptures and accepted by all branches of Filianism, is a clear, detailed, and unequivocal statement of non-dualism.

Some would contrast this with The Heart of Water, another Filianic Sutra which could be considered much more down-to-earth, being the only Sutra to speak in any detail about things like the social order of a Deanic society.

In this sermon, these two Sutras are considered together, and we see how intimately they are connected. The Heart of Water could be seen, from one angle, as the outward implementation of Cry Marya.

While Cry Marya speaks of transcending the world-illusion, The Heart of Water explicitly recognizes that the world is on one level illusory and speaks of how we might live in the world in Divine Harmony (thamë) without becoming ensnared in illusion.

Listen to the sermon on Cry Marya, The Heart of Water and Filianic non-dualism:

Descartes, Illusion and the Contradiction of the Modern World-View