Original Sin and the Snake in Filianism 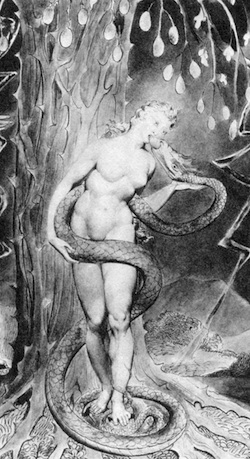 Does the concept of original sin enter into Filianism, the faith of Our Mother God? While there have been notes on this question on this site before, entering into some of the complexities, it is perhaps opportune to state the matter more definitely in relation to Filianism.

The doctrine of original sin - that humans are born sinful and are guilty of sin even before they have done anything in this life - is a specifically Abrahamic and mostly Christian doctrine. In Christianity it proposes the idea of a kind of "hereditary sin" inherited from Adam and Eve. It is also based on the legalistic notion of sin and punishment, that people are guilty, by heredity, in a quasi-legal sense.

This is the meaning of the Christian concept of "redemption" - the idea that Jesus "paid the price" for inherent human sinfulness: original sin.

This idea is not present in Filianism. We do not believe that Dea, our Mother God, is "wrathful" or that She punishes us for sins. Nor is the concept of sin itself (in the Christian sense, which is based on this quasi-legal concept) present in the Filianic faith.

There is clearly some parallel between the action of the First Daughter of Creation in embracing the Snake and turning from the Mother, and the "sin of Adam". However, we need to understand that despite a degree of narrative similarity, the thealogical position is very different. Let us look at the differences:

1. The act of the First Daughter of Creation (the first human maid) is not seen as "sin".

2. It was not an act of disobedience (as the sin of Adam was). She did not do anything that God the Mother had forbidden.

This last point is all-important. For Filianic thealogy, the "fall" (to use a Christian term) and manifestation (or creation) are intimately and necessarily connected. There could not have been full manifestation of a universe without a so-called "fall". Thus what Christians regard as the "fall" (and the term really is not appropriate to Filianism) is not the source of "original sin", but the source of cosmic existence itself.

In Hindu terminology it can be seen as the source of avidya or the illusion of worldly existence. These two statements are really the "objective" and "subjective" sides of the same coin.

It is important also to realize that while some Hindu sources regard the illusion of being - nescience or avidya - as purely negative, the religion of Our Mother God, both Indian and Filianic, see it as part of Her creative activity. Both vidya and avidya, nescience and knowledge, are powers of Dea:

Through Thy power of nescience doth the world appear, like to a rope appearing as a serpent or as a garland of flowers.

Through Thy power of Knowledge Thou dissolvest the world back into Thine own Self.

Glory unto Thee, great Empress of the Universe.

Thus the First Daughter's action is something very different and much more complex than "original sin".

The reason for this is that a manifest universe is by definition imperfect. Manifestation means developing outward from the Divine. It means the existence of "things" as well as God Herself. If things were not separate from God they would remain inherent within Her and there would be no outwardly-manifest cosmos. This is not original sin, but simply the nature of manifest being.

Yet, insofar as things are outwardly manifested, they must have a degree of imperfection, since total perfection exists only in Dea and can be restored only by the complete return (or "inbreathing") of manifestation to Dea.

Thus the "fall" or transition-to-imperfection of maid and of the cosmos is not an "accidental" event that might have occurred differently. It is a fundamental aspect of the process of manifestation itself. Maid (not limited, of course, to terrestrial humanity) is the center of manifestation. There could not be a cosmos without maid (contrary to the pop-science view that intelligent life is merely an "accident" of a purely-physical cosmos which had no beginning outside itself - and therefore logically could have had no beginning at all and should not exist).

The question may be asked: "Why did Dea allow an imperfect cosmos? Why did She create maid in order that she become imperfect?"

First let us be clear that this question must be common to any theistic view. In the first place, the cosmos is imperfect. Old age, disease, and death are endemic in life. Animals live by the death of other animals. Suffering exists not just accidentally but inherently as part of life. Buddhism in particular lays stress on this fact, though clearly it is not the exclusive doctrine of any faith but simply incontrovertible fact.

For full manifestation to take place, a move to imperfection had to happen. Thus the First Daughter of Creation was fulfilling the conditions necessary to manifestation in turning from the Mother. Clearly this was not "original sin".

It did, however, involve participating in the inherent imperfection of being and allowing the "darker" side of manifestation to take form.

Manifestation is a balance between light and dark, yin and yang. The conflict of the elements is necessary to manifestation. If the elements were in Unity (which means they would still be undifferentiated from Dea Herself), there would be no cosmos. The imperfection introduced by the First Daughter of Creation ends the Golden Time:

And whereas all things had been golden, now they took on every hue and color, and the world was beautiful; but it was not so beautiful as it had formerly been.

However, the cosmos is maintained in harmony (thamë). Rather than being random and accidental, it is controlled by the Celestial Music, the rhythms of time.

Henceforth shall time be divided into day and night that you may rest.

Day and night is the Archetype of all the cyclical rhythms that govern creation.

Thus we have a universe that:

• Yet is fundamentally good and ruled by the Divine Harmony:

It is Love that holds the drop of dew pendent upon a blade of grass, neither flowing forth in watery profusion, but swelling within the unseen urn of its brief harmony.

It is Love that holds the stars within their courses, and all the worlds of the immeasurable cosmos within the harmony of the celestial music.

Both the cosmos and maid herself have good and bad elements. Neither the cosmos nor maid is perfect, but neither is "evil" or possessed of original sin.

The Western world has a strong prejudice toward verbal and dialectical answers to questions like this, but let us be very clear that such answers cannot be more than symbolic. Human language by nature does not deal with matters beyond the human state. Where it tries to, it can only treat them as if they were part of the human state or the manifest world. Even the Scriptures depict pre-manifestation (the Golden Time) as if it were like manifestation. There is no other possibility.

However, what we can understand is that Dea initiated manifestation out of Love. What that perfect Divine Love is, is itself a thing beyond our understanding. What is love that seems to have no subject and object - no "lover" and "beloved"? Is the apparent separativity of manifestation necessary in order to express "lover" and "beloved"? It would seem so. But let us be humble enough to admit that these are not simply things we do not fully understand. They are things we cannot fully understand. The simplistic faith of the Western mind in verbal formulae is often misleading, but in a question like this it can only lead us astray completely.

If it was not original sin, what did the first Daughter do?

The act of the First Daughter of creation was to embrace the Snake. However, elsewhere in Scripture she is referred to as having "turned from the Mother". These two acts seem to be the same.

The key to this is given in the Scripture:

at last she threw herself down and embraced it ...  And at once she was turned from the Light of the Mother to the lights of the things that are.

In other words, she entered the world of things, the illusion of worldly existence. Since the illusion of worldly existence is the essence of that existence, she was participating in making manifestation possible, but at the same time participating in its necessary imperfection. To call this "original sin" would clearly be placing a grossly negative moralistic interpretation on something that is in fact far subtler.

We may see a parallel here with the Taoist statement that the earliest humanity saw only the Tao, later she saw Tao and things, and finally only things. While this is on one level a commentary on the decline of history, at a deeper level it is cosmological in import and tells essentially the same story as the Filianic Creation. We may note also that Taoism, far from believing in original sin, believes in the fundamental goodness of maid, as does Filianism.

The First Daughter was a part of the process of manifestation both in its negative and its positive aspects. She helped to bring about a world that was beautiful, but not perfect (i.e., not unmanifest) and therefore "not as beautiful as it had formerly been".

However, for the first "time", that beauty was able to shine outwardly. The rhythms of the universe, the cycles of being, the harmony of the spheres, all stem from this act. They are Divine, but before this time they only existed within the Divine in potentia.

Unlike the Christian story, this is not a moral fable about original sin. It is a depiction of the development of manifestation in both its beautiful and its imperfect nature. Its meaning is inherently metaphysical.

The reaction of God the Mother to this act was not in any sense one of anger or even mild disapproval. She simply states what has happened and explains her arrangements for making life possible to her child. She initiates the harmony of the universe which will "later" be taken up by God the Daughter:

You shall command the movements of the waters, and the wind shall be Your servant. The seasons of the earth shall You control, and all the times and seasons in the lives of My creatures. Every soul on earth and in the heavens shall be given into Your care, and the highest stars of the firmament shall know You as their Sovereign.

The concern of Our Mother God at every point is not to punish her children for "original sin" but to provide for them and to create harmony. Participating in that harmony is the path of the Filianist believer.