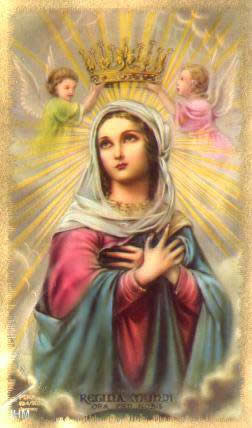 Our Lady Mary, Queen of Earth and Heaven: Should She really be seen naked?

This discussion on nudity and Our Lady Mary began as a news item in The Chapel Chronicle on the views of the neo-traditionalist composer Sir John Tavener on the value of femininity.

It expanded into the examination of a controversial topic involving the eminent traditionalist philosopher M. Frithjof Schuon and a series of visions that many would consider shocking.

The Deanist diagnosis of Kali Yuga has always been that its materialism and violence are metaphysically connected to patriarchy and the emergence of the masculine principle.

It is not that one causes the other, but that all are related expressions of the "Iron" (Mars-oriented or Vikhelic) principle that becomes dominant in the Last Age.

Further, we believe that this last phase of the Yuga is one in which the extreme, unbalanced force of masculism dominates to a degree unknown even in earlier patriarchal societies, with feminine qualities being continually undervalued and downgraded, even for women.

It is interesting to see a prominent spiritual artist supporting this view publicly.

The well-known British composer, Sir John Tavener, whose major work, "The Beautiful Names", a setting of The Ninety-Nine Names of God premiered last month [June 2007] at Westminster Cathedral – and who is a member of the Maryamiyya, a non-Christian initiatic organisation centred on the worship of Our Lady Mary and founded by the great Traditionalist philosopher Frithjof Schuon – said this in an interview:

I think our society at the moment – because I am a great critic of modernism – is very masculine-oriented, and the art I see and hear around me has gone beyond masculinity, it doesn't even possess the dignity of being masculine any longer. It is very aggressive and violent. And the feminine dimension is what everyone could do with having a good dose of.

We think few devotees of Our Mother God could disagree with this!

2. Nudity and Our Lady Mary

Thank you for the interesting information about Sir John Tavener. It seems he made these comments in an interview with Miss Charlotte Higgins of the Guardian newspaper.

Having done a little research, I also find that Sir John Tavener told Miss Higgins about "a visionary to whom the Virgin Mary would appear, always naked" (the visionary's name is not given, but it can only have been Frithjof Schuon).

This seems very out of keeping with the traditional symbolism of Our Lady Mary, if not a little dubious. I should be most grateful for your comments.

Thank you for this question, honoured Miss Cheung.

As you say, this is very out of keeping with traditional images of Our Lady Mary. Nudity is not unknown in ancient images of Dea and is still found in Tantrik and other Eastern traditions. In our view this has no place in the devotion of a Western person of this Age, for whom it is likely to raise all kinds of issues of an entirely profane nature (whether prurient, prudish, or connected with a wholly inappropriate "celebration of the body" that has nothing to do with the ancient sacred meaning of nudity).

Tantriks are subject to rigorous initiation processes and it is a strict precondition for all initiations that the devotee should not be subject to any form of sexual perversion (which would mean anything other than the most orthodox Tellurian heterosexuality). This is entirely proper, considering that such initiations must take place in a Tellurian patriarchal context.

M. Frithjof Schuon's visions also took place within an Initiatic Order. Had they been seen by a lesser person than M. Frithjof Schuon, one would be inclined to dismiss them as part of the lasciviousness of the age. However, M. Frithjof Schuon was unquestionably one of the few great traditionalist thinkers of recent times (leaving aside the inevitable patriarchal slant, his works are highly recommended), and one must give him the benefit of any doubt.

The publicisation of such visions we can only consider incautious and liable to cause scandal and offence among the loving children of Our Lady Mary. However, we do not believe M. Frithjof Schuon ever did publicise them. They were dragged to light by scandal-seeking journalists for the worst of motives. We also feel that Sir John Tavener was unwise to mention them publicly.

Initiatic secrets like this – even if wholly legitimate in their own sphere – when taken out of context can only be dangerous and damaging.

Whatever Initiatic significance they may have, such Images have no place in the simple devotion of pure devotees like ourselves who have no part in patriarchal Initiations and wish only to adore Our Dear Lady – whether with images of Our Lady Mary or in some other orthodox form – in the simplest and purest way

Main page on Our Lady Mary

Hail Mary full of Grace: An explanation of this beautiful phrase

Maria-sama no Kokoro: a beautiful online video of a hymn to the Immaculate Heart of Mary with Déanic interpretation

The Mother-God Hail Mary MP3: The Hail Mary as "translated" for devotional use by children of Our Mother God, presented and explained in a sermon given at a Filanic Service