A Sermon in Outer Space

Despite its fictional context, A Sermon In Outer Space discusses some important questions regarding the relation of the "scientific" to the traditional view of the cosmos, using the metaphor of outer space as a starting-point. We think readers may find it rather fascinating! 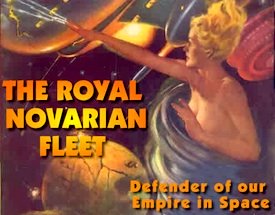 There are several chapels aboard H.M.S.S. Imperial Princess, but before her last great voyage, a service was held in the Grand Auditorium, which is also used for concerts and important addresses. It was celebrated by Sai Althea Matikhinde, a Votary of the Golden Temple at Nevrayapurh who is also Honorary Professor of thealogy at the University of Nevrayapurh.

MY DAUGHTERS, many of you are about to spend several months, perhaps even the better part of several years, in outer space.

And yet there are those among my sister-kin who question whether we ought to be in outer space at all. And I shall tell you why they question it.

Our Lady made the good earth for us to tread upon. She raised up the sacred mountains, upon each of which some people of our world have looked as on the centre of the earth. She has set the sun and the moon above us, and each of the seven planets, arrayed in her proper sphere. And looking on these things, we understand our place in the world She has made.

When we journey into outer space, those things no longer stand in the relation to us wherein Our Lady placed them. And the other symbols – the fundamental symbols by which we understand the pattern of the world are likewise taken from us. The four seasons in their regular rotation. The four directions, North, South, East and West. Even the four Elements are removed as we travel through the vast abyss of pure Aethyr.

Now each of these signs, my daughters: the seven planets, the four directions, the passing seasons; each of these and many like them were given to us that we might see in the world about us the outward signs of the true cosmos – the cosmos that was in the heart of Dea before a speck of dust was born and will be when all the stars are gone.

Our world, with the Sun as its great heart and the moon as its sensitive soul; with the planets in their right array above her, with the mountains and the valleys – our world is a miniature Universe, a model of the Cosmos that perfectly reflects the true structure of the Whole. However far we travel in space, we shall not see that Whole. For however much we see, we do not see all. We saw it when we stood upon the earth, if we had eyes to see. We cannot see it here.

Now each world inhabited by a creature akin to maid has also its Universe-in-miniature arrayed by Dea. And, so long as that creature, akin to maid, stays within her world, she can see the Whole. But there are worlds, and you may well encounter them, where this vision has been lost. It is not necessary to travel into space to lose this vision. Even an awareness of the existence of space may be enough to throw the world awry. Once a creature realizes that her sun is not the only sun, her earth not the centre of the Universe, she may be pitched in her soul, into the void; her world become all accident and chaos.

So there is but one earth, and one sun that is the heart and centre of the Cosmos. And every world that has a creature akin to maid is that earth, and every sun is that sun. One does not have to stand upon the earth to know these things. Neither has one to travel into outer space to lose them. There are worlds, as I have said, that have lost the knowledge of these things. Worlds where the partial knowledge of the stars has severed the roots of maid upon the earth. Terrible are such worlds; for once the roots of maid are severed in her heart all else begins to crumble; until, in the worst of those worlds, the servant obeys not the mistress, the child obeys not the mother, the people obey not the princess. Order is gone and chaos prevails. In the worst of those worlds the people dress in mean rags, not because they are poor, but because they can no longer abide beauty and comeliness in themselves. When the harmony of the Cosmos is forgotten, all other harmony withers from the root.

Such is not your way, my daughters, for you have the wise to teach you and the hearts of children wherewith to learn. Such a path of folly lies not before you. Yet even so, it is a dangerous thing to remove a maid from the signs Our Lady has set about us. From the great sun at the heart of the Cosmos. From the seasons and the North and South. From the ocean and the wind. Maid was not born to live void of such signs.

That is why some among my sisters say that we should not come into outer space. And all things being serene, I should give them the right. Yet all is not serene in these last days. Dark things arise in the northerly parts of the earth, and in the black depths of space they arise, perhaps to menace the peace of the Celestial Empire. Yes, and in the very folds of time and space they may arise. And wherever the Celestial Empire may find an attacker, there must she place a defender; even in the darkest place. You knights of Vikhë need not a votary to tell you that.

And so, my daughters, for better or for worse, you are here in outer space. What then should your ghostly* mother bid you do? What signs are given to you who have travelled outside the goodly world of signs?

You travelers of the aethyr should think always of the Strivate ** — the Thread-Spirit that joins all the worlds and all the souls as pearls upon a string. Know that wherever you travel and into whatever seeming emptiness, you are threaded always upon the Strivate, which is the very Breath of Dea. And know that however far you wander and whatever sights you see, and however far a creature may have fallen from Her, in the end there is no thing that is not Dea.