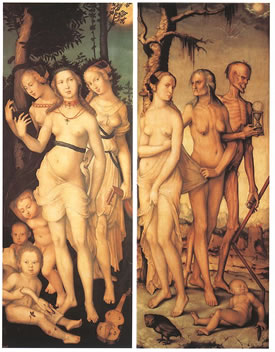 PAGAN RELIGION: Can a tradition decay? And why would it do so?

In your page on Mother-god Scriptures you say:

...all traditions that have survived (including the most ancient: Hinduism and Taoism) have undergone radical modifications; not, certainly, in order to change their Essence, but in order to adapt themselves to the consolidated and much more limited nature of the current humanity.

...even if it were possible to recover the oldest Scripture of the truly feminine traditions of earlier times, they would not be efficacious for us and would be in the same condition as the Northern and Classical "pagan religion" which (unlike its close Indian cousin) did not adapt to the new conditions and therefore dwindled away to be replaced by fully effective new traditions.

Taking these two passages together, it would appear that you are saying that pagan religion was in fact superior to the "higher" or "world" religions that followed it. Would this inference be correct?

Honoured Miss Inannadasi, the answer to your question is, we are afraid, both "yes" and "no".

To begin with the "yes" side: there is no question but that human history is the history of consolidation from the spiritual to the material state. The intellectuality, spirituality and even the mere psychic development of earlier peoples was far superior to our own.

Only in the material sphere do modern people outshine the pre-historic civilisations (that is, in the manipulation of matter by material means), and since, in the very latest phases of Kali Yuga they can perceive no other aim to life, they declare themselves the heirs of a "continuous progress": like the football player who declares football superior to chess because one cannot score touchdowns in chess.

This being the case, it is clearly correct to say that the Traditions in their forms preceding major adaptations to human decline (of which the last great one was in and around the 6th century b.c., adapting traditions for the final phase of Kali Yuga) were higher and purer than the adapted and "economised" traditions that followed them.

The entire reason for the adaptations was that the earlier traditions were increasingly no longer possible to humanity. They were becoming like the calculus in the hands of small children who were barely capable of addition and subtraction.

"Pagan religion", in the form we know (or half-know) it from history, is already equivalent to the fanciful ideas aroused in the minds of children by the technical terminology of the calculus.

In the Classical world the Great Adaptation of the 6th century B.C. was perverted from its course of re-adapting the tradition (as "spontaneously" happened in the Chinese, Indian, Hebrew, Mazdaean and Celtic civilisations at about the same time). Here the centre of Adaptation was Athens, culminating in the Periclean age, and the thrust of the movement was diverted from re-adapting the sacred Tradition into reduced, but equally sacred, forms into a purely this-worldly orientation.

Thus, in art we have the first representations of material form, imitating mass and perspective, rather than attempting to depict the Divine Ideas that lie behind material manifestations. Plato (the greatest Traditionalist voice to speak out against the false readaptation of the Hellenic tradition) called this "making copies of copies", since material things are already copies of their Divine Archetypes.

In philosophy we have the precursor of that modern rationalism which reduces all things to their material nature; though this was firmly resisted both by Plato and his followers and by the half-understood remnants of the unreformed Hellenic Traditions, thus it did not take full root until after its "revival" 2,000 years later following the European "Renaissance".

In the case of Northern pagan religion, so far as we can tell, there was not a perverted (in the literal sense of "misdirected") readaptation, but no readaptation at all.

In both instances, so far as the "religious" aspect of the tradition was concerned, the result was the same, because confronted by the un-translated spiritual "language" of a higher Age, the same errors will occur.

Talk to any small child about "logic gates" and she will imagine something with five wooden bars, or else made of wrought iron that she can swing on.

Talk to any (extra-traditional) person of the later Kali Yuga about "goddesses" or "gods" and she will imagine an individual being on some level equivalent to herself. This, indeed is precisely what pagan religion consists of, and to this extent we may say that pagan religion (in the sense we understand the term) did not exist before the degeneracy of the Traditions from which it had declined.

The careful explanation of the doctrines of atma, maya, saguna brahman, nirguna brahman, the Upanishadic formulations, the monism of Sri Sankara and many related concepts, adapted the earlier doctrines in India into a form understandable by the late Kali Yuga mind (still a mind far superior to the modern mind). The true nature of the Divine Powers in relation to the Divine Herself was clearly and carefully defined in ways that had been unnecessary in a higher age, but were now indispensable.

Without this re-adaptation, the related "polytheistic" traditions of Europe – what later became called pagan religion – declined into a childish parody of Truth, and indeed, in some cases, even became truly deserving of the oxymoron "polytheism".

The process took place gradually, affecting "popular paganism" before it began to affect the inner Mysteries, but gradually the entire pagan tradition became drained of genuine spiritual content, and "new" religions, which had grown out of the re-adaptation movement had increasing appeal – like fresh flowers in a world where all flowers were dried and preserved.

Thus it was that Christianity, a tradition that remained both vitally connected to earlier Tradition and successfully adapted to the lesser mentality of the age (as well as being steeped in Platonism), swept aside the pagan religions like so many dried-out cobwebs.

We may note also that while the pagan religions had not adapted to the true needs of the present humanity, they had adapted to the political and cultural requirements of patriarchy. This means that a variety of changes had been made to the Traditions at a time when they were no longer fully understood.

To those who believe that myths are "arbitrary human inventions" this might seem to matter little; but to those who understand the true nature of Mythos, it will be apparent that this procedure would be no less disastrous than (to make an analogy fully understandable to the material mentality) altering a complex electronic circuit with no knowledge of the principles on which it was constructed.

The re-adapted Traditions, on the other hand, which, for all their "economism" and patriarchalisation, remained organically rooted in the Primordial Tradition, would – almost automatically – re-manifest the Image of Our Mother God wherever the patriarchal culture relaxed its grip for a moment.

Thus, in India (most intimately linked to the Mother-Tradition) a full thealogy of the "Goddess" (Devi) as Supreme Creatrix was re-established in some branches of the Tradition, while even in Christianity, the Image of Our Lady Mary manifested iconographically and emotionally (even if not doctrinally) the Reality of Our Mother God.

The Pagan Goddess: Reflections on the meaning of paganism and the worship of Dea