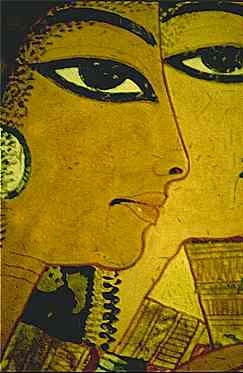 In the eyes of much western philosophy, makeup has had a bad press.

We have spoken in detail about the Philosophy of Beauty and the Classical Western tradition would accept this philosophy, as would traditional non-Western thought.

But while cosmetic philosophy has a fundamentally important place in all traditions before the advent of 17th-century rationalism, cosmetics themselves have not – at least in the West.

The most usual opinion in the Judaeo-Christian and Islamic worlds has been that the "painting" of women is a sign of worldly vanity or even sexual concupiscence.

Since the 1920s, makeup has become respectable in the West, yet few Western people would consider it to have a positive spiritual value.

This has been very different in other cultures. From ancient Egypt to modern India, various forms of cosmetic and bodily adornment have served ritual and spiritual functions.

The painting of different parts of the face has served different ritual and symbolic purposes. The eyes, as the primary receptors of Light, are accentuated and also protected. The protective function often becomes predominant in "folk" traditions – so in certain parts of India, women still line their eyes and those of their children with dark Kohl as a form of protection against the Evil Eye.

Makeup is also associated with the theatrical function, which in the West has been increasingly seen as profane, whereas in traditional societies the playing of one's assigned role is part of the sacred harmony of life.

While symbolic makeup is sometimes worn by men in traditional societies, it is especially the preserve of women and girls precisely because, in addition to its particular symbolic functions, it is an enhancement of feminine beauty.

In the Abrahamic religions – and perhaps even more in Western post-religious culture – feminine beauty is all too often associated exclusively with sexuality. But even in some traditional patriarchal societies feminine beauty is correctly seen as the reflection of the Divine Beauty.

While, given the current western philosophy makeup of a specifically symbolic significance is not likely to return to our society any time soon, the general symbolism of makeup, as enhancing the Divine feminine beauty, is something that can and should be more widely appreciated.

Miss Alice Lucy Trent, in The Feminine Universe, has important words on this matter:

..there is such a thing as absolute Beauty. Absolute beauty is that which characterises the Divine. All earthly beauty is but a participation in this absolute Beauty, and when we say that a thing is more beautiful or less beautiful, we do not mean it in a quantitative sense. Beauty cannot be measured. We mean that the thing in question participates to a greater or lesser degree in the absolute Beauty – reflects it more or less perfectly in its own kind.

It is for this reason that the cultivation of beauty in our own lives is of fundamental importance, while the cultivation of ugliness or disorder in dress and personal appearance (as well as in art, design and other spheres) is a dark ritual of the Tamasic period and must be resisted. It is sometimes asked: "What of those who have the misfortune to be personally unattractive?" But physical ill-favouredness is merely an accident of the world of flux. The plain maid who makes herself as neat and beautiful as she can be is acting in conformity with the Light. The well-favoured maid who conforms to Tamasic fashions of ugliness and absurdity invokes the darkness.

According to such philosophy makeup is not simply a profane luxury but an uplifting and spiritual thing.

Miss Trent speaks of the plain maid, and yet with the resources of modern cosmetic technology, beauty is within the reach of most of us – and to our way of thinking this can only be a good thing.

The first half of the twentieth century, with its Art Deco aesthetic revolution, gave birth to a new science of glamour, which was an echo of the old glamour of traditional sacred femininity.

Devotees of Our Mother God may feel liberated to pursue beauty, freed from both the old puritanism of Hebraic religion and the new puritanism that dismisses beauty as superficial.

According to our philosophy makeup, along with elegance of dress and manner, is among those things that allow us to re-connect our femininity with the Eternal Beauty.

The philosophy of beauty does not make makeup a spiritual necessity, but it does encourage us to enhance and enjoy our beauty with a free heart and a spiritual purpose.