Blue for Girls, Pink for Boys?
Was it once "pink for boys and blue for girls"? 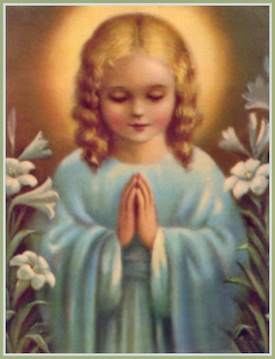 Was pink for boys and blue for girls ever the rule? A correspondent writes:

I'm a little curious as to why you chose pink instead of blue for your site's main color. [The site had a pink background at that time.]

Throughout history, light blue was seen as the traditional colour of baby girls and light red or pink for boys. This was how it was in Europe for thousands of years until Hitler used pink for homosexuals in the holocaust, at which point the colours' genders switched.

The reason for the original colour association was because blue was seen as soft, gentle, and feminine and red was seen as aggressive, symbolic of blood, and masculine. Anyways, I thought that I'd just point that out.

This is actually a bit out of the area normally covered by this site, but the idea that the gender associations of pink and blue were until recently reversed is one that has become quite popular of late.

There are some obvious reasons for this popularity. It is popular among people who wish to undermine what they call "gender stereotypes", it is popular among those who feel they have an interest in undermining any vestigial symbolic certainty people may possess, and (perhaps most importantly for its spread) it is popular among journalists who always like a story that tells us that what seems natural to us is wrong on the old journalistic principle:

The warning flag should go up for critical minds when we see the Nazis trundled out. The likelihood that the practices of Nazi concentration camps had any influence on American popular culture is beyond remote – but this particular bit of history is an obsession with iconoclastic petty-intellectuals and sensationalistic journalists.

A lot of the "pink for boys" theory rests on an oft-quoted article from the June 1918 issue of the Ladies' Home Journal. Most of the "colors were formerly reversed" articles – presumably copying from other such articles – cite this:

"There has been a great diversity of opinion on the subject, but the generally accepted rule is pink for boys and blue for girls. The reason is that pink being a more decided and stronger color is more suitable for the boy, while blue, which is more delicate and dainty, is prettier for the girl."

The problem is that if one actually troubles to check the June 1918 issue of the Ladies' Home Journal, one finds that no such article appeared in it.

On the other hand, looking at Little Women published in the mid-1860s, one finds that Amy tied a pink ribbon on Daisy, and a blue one on her male twin, Demi "so you can always tell".

While we agree that blue was associated with the Virgin Mary (the Queen of Heaven) and "Alice blue", there is no similar tradition of pink being used for boys. It has been occasionally so used for a few decades in the early 20th century (not before and not after) but not as a generally established rule. The sweeping statement that

Throughout history, light blue was seen as the colour of baby girls and light red or pink for boys. This was how it was in Europe for thousands of years...

is really a piece of recent journalistic invention.

In our tradition, colors derive their symbolism from the Janyati, all of whom are feminine.

It was natural, though, that if colors have to be gender-specific, human instinct will settle on pink for girls since it is a color of Sai Sushuri, or Venus, and has always been, in most European languages, linguistically associated with her flower, the rose.

Oh – and the site is pink just because we liked it!

How very interesting! Wikipedia's article on the color pink does not cite the imaginary Ladies' Home Journal article. But you will notice that it has clearly influenced the writer. We have the exact phrase "delicate and dainty" for blue and the unusual adjective "decided" for red/pink. This can hardly be coincidence:

Looking at the footnotes we see reference to a popular piece on color from a design magazine which does indeed quote the phantom article – and the concentration camps. So we see how these journalistic urban legends spread.

The reference to red symbolizing blood and therefore masculinity is curious. Are men supposed to have more blood? Or is it their predilection for shedding it?

Actually, of course, the writer is here voicing an intuition of something that is true – that red belongs to the Vikhelic (Mars) principle, which actually governs the phenomenon of masculinity. But of course this has no place in the pop-science narrative of current journalism. What is untrue is that pink is simply a variant of red. Most languages have a specific word for pink unlike the light versions of other colors.

Pink IS a special color – not just a light red. That is why so many languages have a special name for it (often rose, rosa etc.) when there are no special names for light-blue, light-orange etc.

In Aristasia, pink is one of the colors of Sai Sushuri (along with green). The interesting thing to me is that while pink for girls and blue for bee-oh-whys does not make any special symbolic sense in Telluria (it should be pink for girls and RED for bee-oh-whys), pink for blondes and blue for brunettes has always been the rule in Aristasia and should be, because chelani are ruled by Sai Sushuri and melini by Sai Thamë.

So next time you hear folks say blue has always been a feminine color, remember that is quite right. It is the brunette color and very feminine. Pink for boys, on the other hand, is nonsense.

Send Questions or Comments on Pink for Boys