Children of the Princess 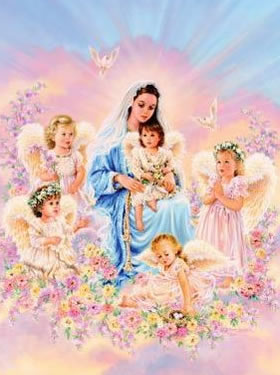 The fifth day of Eastre is the Day of Our Sovereign Lady (Lady Day).

This talk explains how Our Lady brings the Way of Heaven to earth and establishes the Divine Law by which we may live upon the world not as worldly creatures but as Her beloved children.

The Eastre Mystery, which we celebrated a few days ago, is the Mystery of Our Lady as Priestess of the World, the Great Mediatrix, the Great Redemptrix, who, through Her Sacrifice, mediates maid to God and God to maid, thus fulfilling the highest office of Priestess.

Every Priestess in the world is a reflection of Our Lady in Her Supreme Role as Priestess of the World.

And while She was there for but a short time before She rose into Heaven to become Queen of Heaven, She did certain things and our reading tells us about some of those things.

Much of what She did was to bring the Law of Thamë to the children of the Earth. This is what Princess of the Earth really means because Our Lady is not a worldly Princess, She is the Law, the Thamë, the Way of Heaven in this world. So, when we follow thamë, when we follow the right way, the Way of Heaven, we are following the Princess of the World.

So, She is Princess of the World. She governs the world in such a way that we, in the world, may follow Her and tread the way of Heaven; so that we live in the world by the Light of the Spirit. As it says in the Great Hymn to Mahalakshmi, She gives

both worldly enjoyment and liberation.

And it is interesting that against this wisdom of the world, this worldliness, She sets a child-like way. That rather than being full of independence – independence is such a watch-word, isn't it, of Telluria in the West? Independence. Instead of being independent we should be children who look to Our Mother to sustain us, and feed us, and show us what to do from day to day, so that we are not worldly creatures: we are children of the Mother.

“Come you so [i.e. as children] to Me and all faults shall be forgiven.”

And She also unites Her children in one body. That is the body of those who worship Her, the Great Celestial Temple of Our Lady.

I shall unite you all who love me in one great body, the highest and the lowest, the living and the dead, those who falter at the door and those who have climbed to the highest tower. All shall be one in my body, which I have given to the world, and all shall be nourished in my spirit.

Eastre: The last and first festival of the year

What Is Filianism, the Faith of the Daughter?

Send Questions or Comments on Children of the Princess