Stephen Hawking, Fairy Tales,
& the Faith of the Faithless 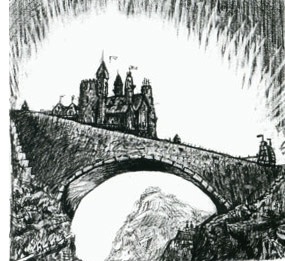 "Life is a bridge: pass over it but do not build a house thereon," say the Buddhists. The pop-scientific world-view builds its castle on this bridge and bends the laws of evidence to keep it there.

The renowned physicist Stephen Hawking has recently declared that heaven is a "fairy tale" and that there is no life after death.

Coming from so intelligent a person, this is truly a remarkable statement.

Stephen Hawking must know that there is no basis whatever for such a statement. He has said that models can be built for explaining the universe without reference to God (as LaPlace also said to Napoleon over 200 years ago).

Undoubtedly that is true. But that has nothing whatever to do with disproving the existence of God or of the afterlife. Stephen Hawking must surely know enough elementary logic to realize that.

So what brings him to make such definitive statements on a subject on which he possesses no actual evidence of the sort that he would normally require before making a statement?

There can be only one answer. Faith. The very thing he decries in religious people.

The question then arises as to why a non-religious person should have such faith – such blind, unshakeable, dogmatic faith in an unproven and unprovable creed.

Stephen Hawking provides a clue to this interesting psychological conundrum in another statement made in the same interview:

"The universe is governed by science,” he states.

Now clearly this is nonsense. The universe is not governed by science. Science is a human activity. The word means "knowledge", or literally vision. It has been narrowed since the 17th century to mean in the popular mind "knowledge of purely material things".

Stephen Hawking presumably knows all this, and yet he makes statements like "there is no after-life" and "the universe is governed by science". In their different ways these statements are two of the most unscientific things a scientist could say. The first because it deals in an area from which material science has by definition excluded itself, and the second because it is making a "god" out of human knowledge.

Why would anyone say something as fundamentally unscientific as "the universe is governed by science"? It could be dismissed as mere loose thinking or poorly-chosen words, but it is something more than that. Fundamentally it represents the inbuilt human desire for Absolute Truth. This is something that is built into the nature of humanity as a metaphysical being, and something that material science by definition can never provide.

Material science is not about Absolute Truth. It is about provisional hypotheses and accumulating evidence. It is continually changing or (as modern people love to say) "evolving". The one thing it cannot provide is a stable, eternal, Absolute Truth.

And yet the one thing the human mind, as a fundamentally spiritual entity, always craves is precisely a stable, eternal, Absolute Truth.

That is why Stephen Hawking is driven to make statements about the after-life. As a scientist he must know these are untenable, but as a metaphysical entity he needs to believe he can reach certainty on the Whole.

If, as Stephen Hawking believes, human intelligence was evolved as a tool for the survival of the species, why would it even matter if its speculations were "true" or "false" in any sense beyond making predictions necessary for our survival? (including "technical applications" in the broader sense of "survival"). Why do we even care about the ultimate nature of the universe? About things that happened long before the species existed or that will happen long after it is gone?

We care about those things because we are metaphysical beings whose natural instincts go far beyond mere material survival.

This metaphysical need goes so deep that in order to satisfy it and turn the inherently relative discipline of material science into a quasi-absolute, even a mind as brilliant as Stephen Hawking's may resort to sleight of hand. In the same interview he states:

"Science predicts that many different kinds of universe will be spontaneously created out of nothing,"

Now this is at once a very odd statement and a very revealing one. The phrase "out of nothing" (ex nihilo) is precisely the traditional term used for the creation of the universe by the Christian God.

Stephen Hawking is well aware that on the material level creation "out of nothing" is a nonsense. He even clarifies his statement, explaining that the universe is actually created out of "random fluctuations at the quantum level ". Now "random fluctuations" are not nothing, and "the quantum level" is not nothing. So why did the professor use the historically religious phrase "out of nothing"?

To put it in the simplest terms of a child's questioning (children are, quite literally, born metaphysically-minded): "Where did the universe come from?" That question is not answered until you get back to nothing. If you say "from random fluctuations at the quantum level" the child will rightly ask "but where did the quantum level come from? And why were there random fluctuations?" The only way to create a metaphysically satisfactory answer out of physical science is to cheat and say "out of nothing".

One is loath to accuse a mind as great as that of Stephen Hawking of cheating, but in the end there is no alternative. If one wishes to elevate "science" to the place of a metaphysical Absolute (which, in place of God, "governs the universe"), the only way to do it is by sleight of hand and verbal trickery.

Great as his mind is – and we have no hesitation in saying that it is truly great – in the end the desire to make absolute statements on a metaphysical level overcomes Stephen Hawking's scientific objectivity.

But that is only to be expected, because, like all of us, he is not an animal evolved for survival, but a fundamentally metaphysical being.

The Theory of Evolution

Send Questions or Comments on Stephen Hawking, Fairy Tales & the Faith of the Faithless