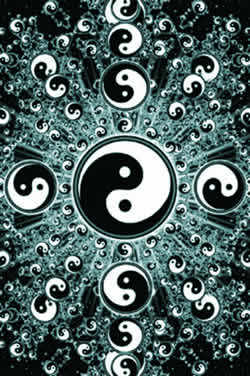 The ten thousand things is a Chinese expression used to mean the indefinite multitude of all forms and beings in manifest existence.

Thus, it denotes the fecundity of the all-creative maya – the boundless abundance of Our Mother God, and also the world of multiplicity, change and flux as opposed to the unitary transcendence of the Spirit.

The metaphysical reason for the use of the precise number ten thousand to represent the indefinite multiplicity of manifest being is as follows:

The implication of this is that four, the number produced immediately after three, is equivalent to all numbers. This is because once one has the first four numbers, one also has the decad, which represents the complete numerical cycle. This formula – 1+2+3+4=10 – is known as the tetraktys [left]. The tetraktys also provides us with the pattern of the cycles of time themselves – see Chapter 2 of The Feminine Universe, "The Cycles of Time".

This close metaphysical association of four with ten is evident in the use of a cross (clearly a fourfold figure) to represent the number ten both in Chinese notation (where it is an upright + cross) and in Roman numeration (where it is a diagonal X cross).

Four is everywhere the number of material manifestation, continually evident in the four directions, the four material elements, the four seasons, etc., while ten represents the completion of the numerical cycle both in time and, as we shall see, in space.

The cross enclosed within a circle (one of the most universal of symbols, found in every culture), is thus a "map of the universe" or a perfect representation of ten raised to the fourth power – the ten thousand things of manifestation.

This association of the fourth power of ten with indefinitude (which is the nearest that can be attained on the plane of manifestation to true infinitude) applies, as we have said, to space as well as to time: for in this domain, the raising of a number to a higher power represents the addition of a dimension. Since our spatial universe has only three dimensions, the raising to the fourth power represents the necessary term of all manifest spatiality (at least in the universe with which we are familiar).

Thus, the expression ten thousand things represents not only all the possible productions of space and time, but the full extent of space and time themselves: and thus the total creation of Our Mother God.

An article from Pandora's Box

Send Questions or Comments on the Ten Thousand Things