The Three Fates
and other reflections of the
Feminine Holy Trinity 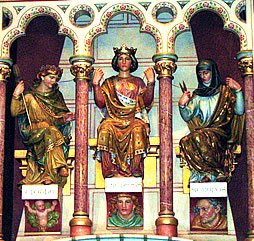 The Three Fates (Greek Moirae, Roman Parcae, Teutonic Norns) bear a striking resemblance to the Triple Goddess or Feminine Holy Trinity. Dr. Jane Ellen Harrison includes them in her monmental Prolegomena to the Study of Greek Religion in the chapter on "The Maiden Trinities".

Thealogically, the resemblance to the Functions of Mother, Daughter and Dark Mother as the Creatrix, Preserver and Destroyer of the worlds is very close. The three fates are the Spinner, Weaver and Cutter of the Thread of Life.

Metaphysically, the relation is obvious. Just as a single human life is a microcosm of the Great World-Cycle, so the three fates represent the microcosmic reflection of the Cosmic function of God Herself.

In Déanic religion, the three fates are considered to be a single Janya, named Werde, who has three Persons: Maia, Werde and Kala. Maia is the Spinner, Werde the Weaver and Kala the Cutter. Three of the months of the Déanic Calendar are named for these Three Persons.

The term werde (with a small "w") means "personal fate" and is used in a way closely equivalent to the Buddhist use of "karma". Werde is close to the fundamental root-etymon wer meaning "to turn" and "to become". We find it in many words such as "verse", "weird" (meaning originally "fate"), "worth" (to be worthy, or "becoming", is to fulfill one's proper destiny), "vortex", "vertigo", "vertebra" (the spine being originally associated with wheels – Sanskrit chakra means "wheel") and many others.

Shakespeare's three "weird sisters" are clearly a reflection of the three Sisters who govern weird/wyrd or fate (Shakespeare certainly was not using "weird" in the modern sense, which was first recorded in 1815, two centuries after his death). 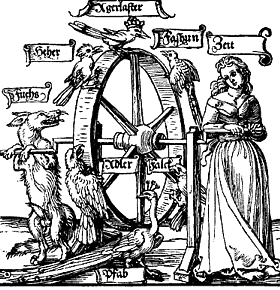 The wheel is closely associated with Sai Werde, and, when the three fates are depicted as a single figure, that figure has historically been the Goddess Fortuna, and her equivalents, with her wheel.

The Feminine Holy Trinity as defined in the Filianic Creed, being the Origin of Being, is necessarily reflected in the world of becoming. The three fates represent the Trinity as it is reflected in samsara.

Another reflection of the Trinity is within the structure of the Seven Planetary Principles (the Seven Great Janyati) governing the seven days of the week.

Of course the assimilation of the four Janyati to the four elements is only a particular perspective, although their affinity for the Spiritual aspects of those elements is clear enough. Similarly, the Solarity of the Mother and the Lunarity of the Daughter have been discussed often, while the apparent darkness of Sai Rhavë corresponds to that of the Dark Mother. We should note that the Geeks called their patriarchal version of Sai Rhavë Cronos, corresponding precisely to the designation of the Dark Mother as the "Crone".

This symbolism forms something of a "bridge" between Eastern and Western traditions. In the East the seven days of the week are governed by the Five Elements plus the Two Luminaries (Sun and Moon). Eastern Elemental Symbolism is rather different from Western and the analogies between them need to be handled with great care, but something of their ultimate unity is hinted at in this symbolism.The elements here are four, but the Fifth Element of Aethyr or Spirit is here represented by the whole of the Spiritual Triplicity.

Just as the Four Janyati are not actually the Elements, so the Three Janyati are by no means the Holy Trinity Herself. But as with the three fates, the spiritual principle of the Trinity is reflected throughout the spiritual world and is seen to govern earthly life at many levels.

By this we may know that even amid the vicissitudes of turning werde, our Dear Mother is always present. She is called the Barque of Swift Crossing, Who carries us across the ever-rolling sea of samsara.

Fortuna was always known as a fickle "goddess" who raises maids up only to cast them down, but this is in the nature of werde or samsara. It is always turning, always changing. Certainty and safety lie only in the arms of Our Mother. The three fates represent turning of samsara. Whatever is born must die. Whatever is young must grow old, whatever is woven must ultimately fall apart.

But beyond the three fates is the Holy Trinity which is their true Source and Origin. Beyond the movement of ever-turning werde is the steady Light of Our Mother, calling us to the safety and love of our eternal Home.

The Three Werdes: A deep study of the meaning and doctrine of the Three Fates in the tradition of our Mother God

Feminine Trinitarianism: A thealogical discussion of the Filianic doctrine of the Trinity

Read about the Nature of Angelic Beings

Send Questions or Comments on The Three Fates