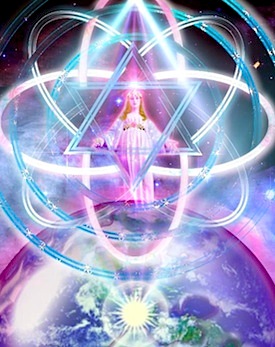 For over a century, Western astrologers have attempted in various ways to merge their traditional science with the modern empirical view of the world, creating a mongrel science which is neither traditional (essentialist) nor modern (substantialist). It is a little like trying to create the best possible system of geography while merging it with the "knowledge" that the world is flat.

One example of this is the use of the three outer "planets", Uranus, Neptune, and Pluto, as if they were of the same nature as the seven traditional planets, merely because their outward (i.e., physical) nature is similar.

We are aware that certain astrologers are returning to a Classical or Traditional model. To us the fundamental point is that genuine traditional astrology is based on a world-philosophy radically different from that of the modern Western world.

When we ask whether traditional or modernist Astrology is the correct approach we are actually asking a far deeper question: whether an Essentialist or a substantialist view of the cosmos is correct. That is to say, do we believe things are what they are because of their underlying archetypes? Do we believe that Form is ultimately supra-material? Or do we believe that the Celestial archetypes are non-existent and that Forms came about by a series of purely-material accidents.

Closely bound up with this is the question: Do we believe (as Plato, Sri Sankara, the Buddha, and most traditional philosophies teach) that the highest level of our consciousness (the Solar Intellect) is able to perceive Form independently of its manifestation in matter; or do we believe that the five physical senses are our only sources of information and the reason can do nothing more than manipulate this information. This latter position is the philosophy called rationalism, which has dominated West European thought for the past three centuries. As we can see, it is not derivable either from the senses or from reason. It is a doctrine, not an observation or a deduction. This is not to say it is incorrect, although, ironically enough, it fails the truth-test set by rationalism itself and therefore would appear to be self-contradictory.

Most modern thinking has this doctrine of rationalism, and the related doctrine of substantialism, at its root. The assumption is that all human knowledge was derived from the information available to five senses plus the operations of the reason on that information. Furthermore, in many cases there is an assumption that earlier human cultures held the same assumption. They did not. Whether they were Platonists, Taoists, Buddhists, followers of the Vedic culture, or tribal "shamanists" like the Native Americans or Africans, they believed that our most important knowledge came from supra-sensible sources. West European rationalism is, historically and geographically speaking, one very small, very isolated, and very peculiar ideology that arose in a particular time and place. Its apparent universality stems from the fact that it was materially extremely effective and both militarily and economically conquered the rest of the world. However, physical effectiveness is no guarantee of truth.

Now where all this bears directly on the question of the outer planets (it actually bears on every aspect of our world-philosophy, but let us return to the question in hand) is this: If we take it that the knowledge of the seven planets was merely a physical observation which was collated with a number of other physical observations (about human behavior etc.) to build the science of astrology, then it would of course follow that finding new "planets" might change the picture somewhat. Also, if we assume that the physical planets have some physical effect (and of course in the term "physical" we must include all forms of energy) on the human world, then it is entirely possible that other physical entities of an apparently similar type might also have some effect.

All of this is based on the assumption that astrology is an empirical science; the only type that the rationalist ideology can accept. However, since the very concept of a purely empirical science is really an invention of the 17th century, this is unlikely. William Lilly states that "as all sublunary affairs depend on superior causes, so there was a possibility of discovering them by the configurations of the superior bodies." Now what does he here mean by "superior" and "sublunary"? Is he suggesting that what is physically "higher" (i.e., further from the earth) than the earth's mineral satellite is superior (in some respect other than mere physical "height") to the earth and influences it? And if so, what kind of sense does that make? And is it not clear that by "sublunary realm" the ancients, and Lilly, actually mean the physical realm?

Perhaps this can be made a little clearer by quoting from The Feminine Universe (I would recommend reading the entire first chapter from which this is taken, and which is available online):

The traditional image of the cosmos was not based on “exploded astronomy”, because it was not based on astronomy at all. It has nothing in common with astronomy in the modern sense of the word — which is to say, with attempts to understand the physical universe on a purely physical level.

This is in fact perfectly clear from the traditional writings on the cosmos. The sublunary realm — that is, the world below the Sphere of the Moon: our Earth — is the realm of material things; the world of change and decay; in other words, the physical universe.

Everything in physical manifestation, that is, everything comprehended by modern astronomy and by modern science as a whole — from the smallest sub-atomic particle to the furthest galaxy countless light-years away — is part of the first circle of the traditional cosmos. As soon as we reach the very nearest of the celestial Spheres, the Sphere of the Moon, we are already beyond the material world and beyond everything recognized by physical science.

If you think about it, this must be what Lilly and earlier astrologers were talking about. When they said "sublunary" they did not mean "so many miles below the satellite", they meant a different sphere and kind of manifestation. They did not regard the planets as physical entities. In this they may be accused of confusing the planetary principles with their outward and visible manifestations. But then modern astrologers could be accused of the same error upside-down: confusing the supernal principles with the bodies of mineral  and gas that are their material symbols — their reflections in substance, as it were.

Now, I have stated that I am not an astrologer and I reiterate that. The knowledge of the "planetary" (I would rather say "angelic" or "Janyatic") principles is not in fact something tied to astrology — it is fundamental to an entire outlook on life and is quite independent of whether one practises the particular science of astrology or not.

Similarly, the elementary principles of non-physical cosmology have been lost to almost everyone in the West other than astrologers (and often to them too). To us, as to other traditional minds, the understanding of the "planetary" principles is not a matter of astrology any more than the understanding of fractions is a matter of carpentry. Astrology is simply one of its applications.

The Image of the Cosmos

The Modern World View vs the Traditional World View

Metaphysics: The Infrastructure of a Religious Understanding