What is a Solar Eclipse? 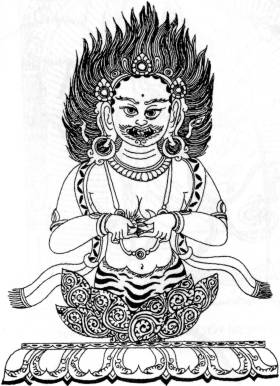 Rahu, Vedic demon of the Eclipse

What is a solar eclipse? In simple physical terms it is caused by the moon aligning directly between the earth and the sun so as to occlude the sun's light wholly or partially.

That is what causes a solar Eclipse on the physical level. It does not actually answer the question: what is a solar eclipse?

Most civilizations other than the current Western one have regarded solar eclipses as dangerous and ill-omened.

Even traditional astrologers (who really should, and in fact do, know better) have explained this with the absurd pop-Darwinist "explanation" that ancient peoples feared that the sun might never return.

What is particularly odd about this is that these scholars actually know that the same ancient and traditional peoples had the knowledge and the mathematics to predict the exact time of eclipses and knew about their recurrence. It is a rather remarkable example of the progress/evolution narrative being so strong in their minds that it overwhelms facts of which they are fully aware. It seems imperative to these people to portray and believe civilizations other than the (historically) recent form of their own to be ignorant, when in fact, in matters other than the purely physical and worldly, the most ignorant civilization yet born is their own.

No wonder progress/evolution is often regarded as a pseudo-religion by those who do not adhere to it.

What is most interesting though is that on a certain level (though not at all the one they are imagining) these scholars are probably partly right.

Traditional peoples were not quite as childishly literalistic as modern Western people, (whether their ideology is Christianity or its twin, Scientism). Of course they did not believe that the sun was literally going away forever or that the world was literally ending.

But they did understand the answer to the question: what is a solar eclipse? — not what causes it, but what it actually is. And that is why they regarded it with proper caution. They did not fear it, but they realized that its effects were dangerous.

So what is a Solar Eclipse?

At the time of writing, the last day of the year 3334 (March 19th 2015), the Eclipse is about to fall after the year has ended but before a new year has begun. On the day Filianists and Déanists call the Hiatus. The day on which the Wheel of the Year stops. The day with no date.

This is an unusual and powerful combination because, at least on one level, a solar Eclipse is precisely what Hiatus is. On Hiatus, ritually and symbolically, the world has ended. Of course, it has not truly ended. We are still here. Our Lady has not let us drop into the "black abyss of chaos". Her hand is still under us, sustaining us. But as near as we can come to it, that is where we are on that day.

Similarly, a solar eclipse ritually and symbolically (for "nature" can and does enact rituals) embodies the impossible. The removal of the Supernal Sun from being. The darkness that would be. The other extreme from the pure light of true Realization.

It is for this reason that in whatever terms their culture expressed this truth (for we certainly do not claim our way to be the exclusive bearer of light) traditional peoples in both ancient and modern times did (and, where they retain wisdom, do) realize that eclipses, and especially solar eclipses, are ill-omened.

We do not need to fear them, any more than we need to fear fire or the sea, but we do need to be aware of their dangerous potential. We should not start new ventures under their influence, for example. Neither should we watch them.

They are times when demonic influences are especially strong. We should take precautions and not do the silly things that untutored peoples do.

We are safe enough so long as we know the real answer to the question: what is a solar eclipse?

The Modern World View vs the Traditional World View