Early Winter Festivals
Advent, Winter & the Daughter-Half of the Year 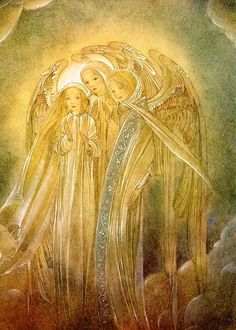 The early winter festivals of the Calendar of Our Mother God mark the transition from the Mother-half to the Daughter-half of the year:

The Commencement of the Advent – Astraea 1st (Nov 28)

The Conception of God the Daughter – Astraea 11th (Dec 8)

Advent, Winter and the Daughter-half of the year all begin on the same day: Astraea the first (November 28th).

Astraea is the first of the three Winter months in the Wheel of the Filianic Year (Astraea, Herthe, and Brighe).

On the first of Astraea begins the Advent of the Nativity of God the Daughter. Strictly speaking, the Mother-half of the year begins at Rosa Mundi (the Summer Solstice) and the Daughter-half begins at Nativity (the Winter Solstice), but between the last great festival of the Mother-half (Tamala, the Feast of the Dead) and the first great festival of the Daughter-half (Nativity) falls a low feast that is of very special significance. It is technically a Mother-festival, because the Daughter is not yet present, but it is also a Daughter festival.

We refer to the Feast of the Conception of God the Daughter on the eleventh of Astraea.

This may, in a sense, be called the transitional Festival between the Mother and the Daughter halves of the year, but also the entire month of Astraea is a Transitional Month, being the great Mother-Daughter month.

Generally speaking, we feel on the first of Astraea that the Daughter-half of the year has begun, but the Mother-half has not yet ended. It is the great and holy month of Mother and Child.

The Commencement of the Advent, the first of the Winter Festivals, is also the time when it is traditional to decorate the house. The idea here is that the Advent is the time of the Daughter's coming and we are preparing our sacred homes (hestias) for Her. The heart and the hearth being equivalent, we are inviting Her birth in both our hearts and our homes.

On the question of decorations, some have wondered whether tinsel and glitter and (perhaps) funny snowy cottages are sufficiently respectful.

Our belief is that this is a joyful time. There is no reason at all to equate "religion" with an excessive sobriety. These early winter festivals mark a joyful season and there is absolutely no reason that it should not be celebrated in a joyful way.

It is a cliché among semi-religious people that this season is "for the children" – and indeed, why should it not be, since it is the season of the Holy Child? But "the children" should include all of us. As it says in the Mother Gospel:

Come to Me as little children in the pure simplicity of your hearts and the virgin innocence of your souls – for truly, all of you are children in the eyes of your Mother, and I shall receive all who come as Her children.

So by all means let us decorate our sacred homes with all the glitter and tinsel that pleases our hearts, for it is sure to please the heart of the very Archetype of all children when She comes to us.

While the Tree, holly, and colored balls and lights (representing the Angelic Powers) are clearly symbolic, such things as snow-scenes may seem to be essentially secular. For modern religions that separate Spirit from nature they may be. But for our Faith, the Winter itself is a sacred symbolic reality (and all fundamental realities are symbolic), representing the Northern Gate of the Year by which Our Heavenly Lady makes Her appearance on earth.

Some of us do all the decorating on the Feast of the Commencement, while others like to begin it then and add more during the Advent season.

However you prepare for the Coming of the Holy Daughter, may these early winter festivals be a time of great joy to you and all those dear to you.

Send Questions or Comments on the early Winter festivals

Once you have enlarged the image you can use the Ctrl + and - keys (Command + and - on a Mac) to resize the Wheel to your exact requirements.
Search this Chapel of Our Mother God:
Click here for the Mother Gospel