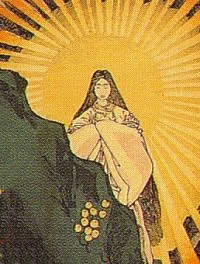 Winter Solstice celebrations are found throughout the northern hemisphere, from Japan to the ancient Americas, throughout Europe and Asia, in Hebrew, Slavic, Indian, Chinese and most other traditions.

Naturally the materialistic modern scholar explains this most ancient and universal of festivals according to his "primitivist" or "evolutionist" hypothesis. In a nutshell, ancient peoples, scarcely differentiated from animals, observed that the light began to grow greater from the winter solstice and therefore celebrated it.

Certain themes may be seen to emerge in these various winter solstice celebrations – the birth of the divine child; the entrance of Divinity into a cave, and Her emergence therefrom, and in the older traditions unedited by patriarchal neo-orthodoxy, always a "goddess" figure at the centre of the mythos.

1. Humanity is an animal accidentally "evolved" on a material planet in a purely material universe. The various elements and occurrences of her environment have no intellectual or spiritual significance, being purely "accidents" of a self-existent, non-intelligent material structure.

Therefore any myths and doctrines she "attaches" to such events as the annual cycle are merely the attempts of this accidentally intelligent animal to "prettify" her raw material experience.

This view is clearly the official outlook of the current academic establishment and of the popularly-understood culture of the modern West. Even religious people tend to accept a "history of human belief" based on this model, even if they attempt to make certain exceptions for their own particular systems.

2. The world is what it is because it is a crystallisation of the Divine Intelligence. Everything within it is of symbolic significance and the human being is a fundamentally spiritual creature with a faculty that naturally perceives this.

However alien this second model may seem to the Western mind conditioned by some 300 years of substantialist education and culture, it is the view held by the vast majority of humanity for the vast majority of its history. It may be called the natural view of the world that everywhere precedes the highly artificial materialist view of the very recent West that has been imposed on the world over the past two centuries.

The modern view is able to defend the somewhat unlikely proposition that it is true while the rest of humanity is in error by its progressist/evolutionist doctrine that everything before it was "primitive", "naive", "pre-scientific" and vainly striving (or else too ignorant even to strive) for its own pinnacle of purely-material knowledge.

Taking, as we do, the former and universal view over the latter and highly localised one, it is easy to see how traditional cultures have tended to interpret other cultures, where they encounter them, in terms of their own. The Greeks and Romans, for example, were perfectly normal in calling Celtic or Egyptian deities by the names of their Classical equivalents.

The underlying assumption is that everyone everywhere sees the same symbolic universe which expresses the same underlying Reality, even if she interprets it in her own particular cultural "language". There is, indeed, a mild irony in the fact that Christianity, with its historically unusual exclusivism and belittling of other traditions, helped to pave the way for the arrogant modern dismissal of all tradition.

What, then, is the reality behind winter solstice celebrations? In the primordial tradition, the winter solstice is the Northern Gate of the year: the gate through which Deity comes to earth.

It is according to this symbolism that divine influence is said to come "down the chimney" that is, through the "uttermost" or "northern" entry of the house, which is a microcosm of the world.

The cave, which plays a central part in many winter solstice celebrations, is the "secret place" into which Deity makes Her entrance and from which she emerges to the world. In Christianity the "stable" in which Christ was born is often depicted as being a converted cave. In Japan the winter solstice celebrations center around the emergence of the Sun Goddess Amaterasu from the cave.

For Filianists, who worship Our Mother God and Her Divine Daughter, the winter solstice is the High Feast of Nativity: the birth of the Divine Daughter from the Celestial Mother in the Cave of the World. It is the birth of the Light of the World, not as the "personification" of a natural material phenomenon but quite the reverse. The natural phenomenon is a "materialisation" of the universal Sacred Event – an event that precedes and underlies material existence itself.

While we gladly accept the validity of all truly traditional winter solstice celebrations, this for us is is the most fundamental of all.

The Meaning of Nativity: The Birth of God the Daughter is the central Event of the Filianic Midwinter High Festival. Read about it here.

The Filianic carol "Hail to the Princess": All the verses, with commentary and recording

Janua Coeli: Gates of Heaven: How the Summer and Winter Solstices are mystical gateways that lead beyond this world

The Christmas Tree: A look at the history of the Christmas tree and its origins as a symbol of devotion to Our Mother God

The Filianic Creed: The perfect statement of the Mother-Daughter religion

The Wheel of the Year: A cycle of festivals