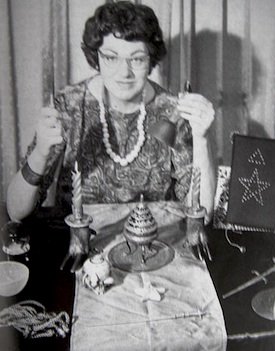 I have only one question. Why in the name of Dea are you so opposed to Wicca? It is a recognised religion of more than 4 million people. Wicca is a lot more friendly than Christianity or Islam to women and it recognizes the Goddess. So why are you so opposed to it and call it self-invented? Every religion got invented somewhere in history. Maybe you feel you have the only right to the Goddess?

Interestingly the answer to this question is already implied by the questioner:

Why are you so opposed to it and call it self-invented? Every religion got invented somewhere in history.

Do Christians think religion is a human invention? Of course not.

Do Moslems? Do Hindus? Do Buddhists? No. None of them do.

Who does then? Secular humanists and atheists do.

And our Wiccan correspondent does.

She does not put it forward as a possibility or even an argument. She takes it to be an obvious and established fact that religion is a matter of human invention – just as secular academics do.

This is precisely the point we have often made. It may be that not all Wiccans and New Age people think this way, but there is a strong tendency for this type of "new religion" to be little more than secular humanism in "spiritual" dress.

The "ancient rede" of the wiccans runs as follows:

Eight words the Wiccan rede fulfill,
An it harm none, do what ye will.

Now apart from the fact that there is nothing "ancient" about this (it was in fact cribbed from Aleister Crowley's "Do what thou wilt shall be the whole of the law"), this interpretation of morality is precisely that of secular humanism. The question of "sin" (or what, from a slightly different perspective, the Buddhists call dukkha) is dismissed completely, to be replaced with an utilitarian humanist morality.

This is the natural morality of those who reject the Absolute and the complexities of the human condition in the light of the Absolute. It is the morality of 20th century secular society, not of any authentic religion.

These two questions – the belief that "god" is made in the image of humanity rather than vice versa – religion being "invented"; and the secularization of morality into a purely-human question are simply two examples of a much bigger tendency.

While we acknowledge that not every Wiccan or New Age person necessarily thinks this way, the tendency for these modernist religions to be simply the praying arm of secular humanism is too great to be ignored.

When we add to this the tendency of Wicca to worship a "god" as well as a "goddess" and even when it does not, to accept the patriarchal demotion of Dea to an "earth" and "lunar" deity rather than our Solar and Heavenly Mother, we can see there is a lot in Wicca to worry about.

I have read your response to my question regarding why you feel so much annimosity towards Wicca. First my appologies that my response is somewhat late (I was down with stomach-flu). To begin with, I DO believe in The Goddess. I don't see her as a concept of the human mind as you might think.

I believe that She is the first mover, the first principle from witch everything came to being. Yes i do think that all religion is invented by (wo)mankind. However, i also think that they are more or less inspired by the Goddess. The inspiration comes from Her, the way we fill things in is our own doing.

We all know (you as well as i do) that the four gospels where written down long after Christ had died. In fact, they were written down after what scientists call "the eye-witness period". The period in witch the people who had actually known Jezus were still alive. So don't you think that the people who eventually wrote things down did not use some "creativity"? Please tell me you are not that naive!

As for Wicca, I do not know whether Gerald Gardner really came in contact with an ancient, still surviving coven or that he and others made it up. And frankly i don't care. It is the only Goddess religion i know off that is active my country. I don't believe in Wicca, i believe in the Goddess. And Wicca is a path to the Goddess for me in wich i can express my gratitude, my love and my devotion to Her.

And if you think that Wicca is not good, that it is not a valid way to honor the Goddess. Well, than there is beautiful task for you. Open a real church (or temple if you like) dedicated to Dea. I wil be one of the first to become a member and visit every time a service will be held (provided the church will be somewhere in The Netherlands :-) because that is where i live). Until that beautiful day comes Wicca will be the only way for me to worship Dea. So it would be nice if you would treat my religion with the same respect you give to Christianity or Islam or Buddhism.

Thank you very much for your thoughtful response. We do hope you are now feeling better. Please understand that we feel no animosity toward Wicca or those who practise it. We do believe that certain errors are rampant within the Wiccan, New-Age and Neopagan worlds, some of which we outlined in our recent post, and that they often do not have high moral standards. They can tend to be pretty much what anyone wants them to be.

In your case, Wicca is a vehicle for a completely valid devotion to Dea. The "test" for whether one is a Déanist in the simplest sense is precisely what you state: "I believe that She is the first mover, the first principle from which everything came to being." But I am sure you will agree that many – probably most – Wiccans do not believe this.

Now please understand that we are not advocates of Christianity or Islam or any other patriarchal religion. We do recognize that they worship God in a valid (if patriarchal) form. We also happily recognize that some Wiccans, New Age practitioners and Neopagans worship God validly and purely. We do not, however, believe that these movements, taken as a whole, are either morally or doctrinally sound. Many, many of their advocates do not really believe in God at all – that is to say they reduce Her to something psychological or ultimately human-based (as the evolutionist/scientistic mythology demands).

Some Christians do this too. Particularly liberal Christians, including "neo-Catholics" like the late Mgr. Teilhard de Chardin. Many of them have a form of "Christianity" which is really secular humanism in religious guise.

In your case you are – as you make clear – using Wicca as a vehicle for the worship of the One True Dea and we applaud you for that. But you must admit that this is not – not by a long way – what all Wiccans are doing.

You are absolutely right that the best answer is the founding of a Church of Dea. For many reasons the time has not come for that, and this current site – as we have often explained – is not a Church, it is simply a center for information on the faith of Our Mother God.

If you find Wicca an appropriate vehicle for Her worship, we absolutely support you and wish you every blessing.

But we cannot and should not close our eyes to the faults of Wicca in general or fail in our duty to make clear what those faults are.

Send Questions or Comments on What's Wrong with Wicca?